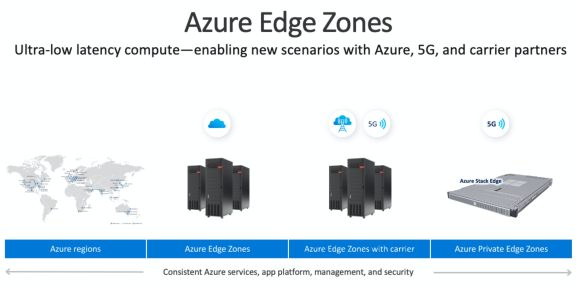 Although new 5G cell tower radios are capable of transmitting data at incredibly high speeds, bottlenecks elsewhere in 5G networks can prevent overall performance from being impressive, particularly for latency — the responsiveness between cloud services and client devices. So today, Microsoft is announcing Azure Edge Zones that will reduce latency for public and private networks, enabling users to take full advantage of 5G’s potential for latency-critical applications.

Edge computing brings certain key resources out of centralized clouds such as Microsoft’s Azure and into one or more local points of demand — the “edge” of the cloud — to reduce data travel times between clients and networked resources. Because of the added expense of addressing individual geographies, edge computing is typically either targeted toward a very specific need for low latency, such as mixed reality, or large industrial customers with the budget to fund the new resources.

There will be two new flavors of the service, starting with Azure Edge Zones for public carriers. U.S. carrier AT&T has already launched a Dallas Edge Zone and plans to bring one online in Los Angeles in late spring, while foreign carriers Etisalat, NTT, Proximus, Rogers, SK Telecom, Telstra, and Vodafone are all planning future rollouts. Microsoft also says it will work independently of carriers to offer Azure Edge Zones in highly dense areas over the next 12 months.

The company also unveiled Azure Private Edge Zones for enterprise-class private networks, combining 5G and LTE with Azure Stack Edge to deliver ultra low latency performance for internet of things devices — and for future applications. One partner, Canada’s Attabotics, uses a variety of Azure technologies to robotically fulfill ecommerce orders in real time, and Microsoft expects that other enterprises will be able to use Azure Private Edge Zones for smart factories, logistics, operations, and medical uses such as remote procedures.

“By combining Vodafone 5G and mobile private networks with Azure Private Edge Zones, our customers will be able to run cloud applications on mobile devices with single-digit millisecond responsiveness,” Vodafone Business CEO Vinod Kumar said. “This is essential for autonomous vehicles and virtual reality services, for example, as these applications need to react in real time to deliver business impact.”

Microsoft’s push to improve its services for the 5G era has been ongoing for some time. The software and cloud giant previously partnered with AT&T to transition part of the massive carrier’s infrastructure to the Azure cloud, and last week it acquired Affirmed Networks to assist with virtualizing mobile network services for the cloud. The company has also been working closely with Qualcomm on 5G-connected Windows computers, which are expected to start launching this spring with Lenovo’s Yoga 5G PC.