Over the years I’ve worked as a technology journalist, I’ve been lucky enough to watch multiple product categories evolve from their earliest days to maturity and sometimes sunsetting — a cyclical process that is rarely identical between different types of products, but often has similarities from category to category. One common thread I’ve noticed is that at some point, multiple products within a category tend to become similar (or satisfactory) enough in horsepower that those differences matter less than a critical convenience one offers over the others, so the “winner” isn’t the strongest or most diverse alternative, but rather the one with the best user experience.

For better or worse, the coronavirus pandemic abruptly pushed much of the labor force into the cold water tank of working from home, and many companies are signaling that this change will continue for months after public spaces reopen. Companies such as Apple have reported notable upticks in their sales of traditional and tablet computers for use in home offices, but regardless of the platform or devices you or your employer prefer, the focus today should be on convenience and user experience, not just raw horsepower.

Beyond the need to churn out traditional work product — concepts, documents, objects, or services — modern work-from-home scenarios now force parents to become responsible for their kids’ education and/or childcare, straining even the most career-focused individual’s ability to focus on their projects. It’s in that context that convenience has emerged as a potentially decisive advantage for businesses that sell products: Saving precious moments of a user’s time isn’t just a “life hack,” but rather the only way to juggle multiple overlapping responsibilities.

Some companies have made fortunes capitalizing on convenience. In decades past, Polaroid popularized instant but mediocre photos that didn’t require a visit to a photo processing lab, which meant they could be enjoyed faster but would fade more quickly than rivals. Ronco similarly created a billion-dollar business by focusing squarely on the simplicity of its “set it and forget it” countertop rotisserie oven. Legendary marketing guru Ron Popeil knew there was magic in putting a whole chicken or slab of beef into a device and coming back later to find a ready-to-serve meal for four, and his company built the product solely to deliver that exact experience.

For various reasons, technology companies focused for decades on specs and performance rather than convenience and user experience, but Apple’s growing successes at the start of the 2000s began to change the discussion. The company’s CEO marketed multiple new technology innovations with a mantra — “it just works” — that promised to free users from being mired in the specifics. Apple engineers had already sanded off the rough edges, he suggested, so you could just enjoy the benefits without thinking much about them. 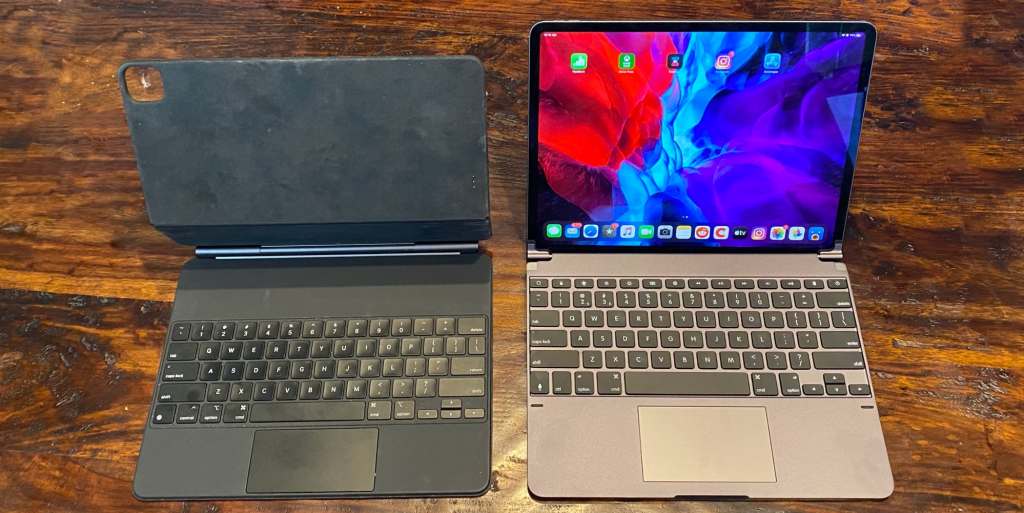 I’ve spent much of the past month thinking about the relationship between power, convenience, and user experience because of several products I’ve tested for work-from-home purposes. What pushed me over the edge to write about it was a new iPad Pro keyboard-trackpad combination called Brydge Pro+, the first such accessory to be announced for Apple’s tablet, but the third to reach average consumers. There’s no need to fully review Pro+, but it’s worth thinking about why it fails compared with its rivals.

On one hand, Pro+ is the best-looking, best-feeling iPad keyboard-trackpad out there, and reasonably priced for what it’s supposed to deliver. Made from aluminum, it feels more like something Apple would make than the plasticky iPad Pro Magic Keyboard Apple actually released. It uses wireless Bluetooth to connect to the iPad, and has its own battery, so its backlit keyboard (with a full row of useful shortcut keys!) and nicely sized tracking surface don’t erode the tablet’s own power source when you use them.

But in real world use, Pro+ turns out to be the least convenient option, and that matters a lot. Something in the firmware or Bluetooth connection has led the tracking to feel less smooth in Brydge’s implementation than competing keyboards from Apple and Logitech. Even though it’s measurable in milliseconds rather than seconds, there’s a hint of lag, and it doesn’t support all the multi-touch gestures (including quick app switching) that you can use with the Magic Keyboard. This actually impacts productivity, and Brydge knows as much: It says it’s still working on Pro’s firmware to improve performance, and claims “it won’t stop” until the experience lives up to expectations.

The fact that Pro+ happens to be substantially less expensive than Apple’s own option isn’t lost on me; there’s a $100 difference between Brydge’s metal design and Apple’s mostly plastic one. But if Apple’s success over the past two decades has demonstrated anything, it’s that some people — many people, even — will pay a premium for something that’s easier to use and/or more convenient, despite other issues it may have.

As we work to recover from the pandemic, other companies looking for success with today’s salary- and time-constrained consumers might not be able to rely on Apple-level extra profits. But they should follow this lesson: Convenience matters to technology users, perhaps now more than ever, and focusing on making your products easier to use will give you the edge you need to win over your next wave of customers.