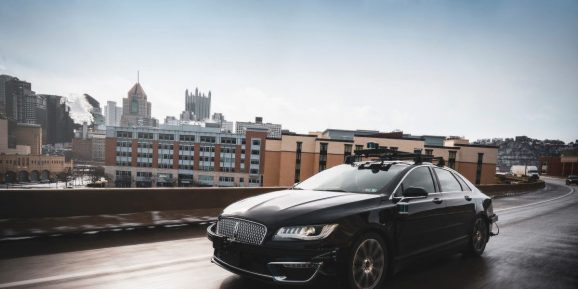 Autonomous vehicle (AV) startup Aurora today announced it has roughly doubled its workforce to 500 people (up from 250 as of May 2019) and committed to hiring workers across the company as it welcomes 22 remote interns and a trio of executives.

Aurora’s hiring spree — which has a specific focus on mid- to senior-level engineers in software and infrastructure, robotics, hardware, cloud, and firmware — comes at a particularly fraught time for AV companies. The economic fallout from the pandemic has begun to take its toll, with even well-funded ventures like Cruise, Kodiak Robotics, and Ike shedding hundreds of employees collectively. (The Wall Street Journal reported yesterday that another behemoth — Zoox, which also laid off employees — is in talks with Amazon about a potential buyout.) Against this backdrop, Aurora CEO Chris Urmson says the company remains in a “solid position” with enough runway to employ its existing team members (including its full-time vehicle operators) and to continue hiring as it advances the development of its full-stack autonomous platform.

“We are actively hiring and with the industry shakeup right now, there’s a lot of new talent on the market, an opportunity we intend to take full advantage of. Our mission to deliver the benefits of self-driving technology has never been more crucial, and we’re hiring across the board, in software and hardware engineering, business, and operations,” an Aurora spokesperson told VentureBeat via email. “We continue to find many ways to make progress by staying nimble and adapting quickly. We’re getting our vehicles back on the road and leveraging our virtual testing suite, which allows us to conduct millions of valuable off-road tests per day.”

Aurora, like most of its competitors, found its vehicle fleet grounded for months by shelter-in-place orders and mandatory business closures. It has since resumed pilots in Pittsburgh with a small number of cars and employees as well as in Santa Clara and Alameda County, California after implementing safety precautions including masks for employees and enhanced cleaning.

Analysts predict the pandemic and its effects, like testing delays, will result in consolidation, tabled or canceled launches, and shakeups across the autonomous transportation industry. Indeed, Ford pushed the unveiling of its self-driving service from 2021 to 2022, and Waymo CEO John Krafcik told the New York Times the pandemic delayed work by at least two months.

According to Boston Consulting Group’s Brian Collie, broad commercialization of AVs won’t happen before 2025 or 2026 — at least three years later than originally anticipated.

“If you are a General Motors or a Ford or a Volkswagen or any of these big companies, you are going through a very difficult process of prioritizing what you spend money on and what is discretionary. That focus is going to be on how do they get people back to work and how do they meet the demand of the public,” Urmson told Bloomberg in a recent interview. “Even when we get the all-clear, which probably takes quite some time, there’s going to be a residual concern about getting close to other people that you don’t know. It will affect the psyche for a while.”

It’s Urmson’s belief that demand for AVs won’t dry up in the meantime, though — hence the need to keep up the pace of hiring. To his point, AV deployments in the midst of the pandemic have demonstrated the technology’s utility; Cruise, Pony.ai, the Hyundai-Aptiv Driving Joint Venture, and others have redeployed their vehicles to deliver food, goods, and medical supplies to those in need. Reflecting this, a Research and Markets report predicts that while the AV market will decline to $23.33 billion in 2020 (from $24.10 billion in 2019), it will recover and reach $37.22 billion in 2023 at a compound annual growth rate of 16.84%.

Assuming Aurora can overcome AVs’ public perception problem, the company stands to enter whatever market emerges post-pandemic from a position of strength. “We have been saying since very early on that we saw consolidation coming. … We’re positioned with enough runway to get through the other side of this and be a beacon for some of these great people whose companies didn’t happen to work out,” Urmson told Bloomberg.