Facebook Messenger will start to extend its home screen ads beta worldwide in the weeks ahead, Messenger head of product Stan Chudnovsky announced today. The home screen on Messenger acts as an inbox for your most recent conversations with friends, automated bots, or brands.

Chudnovsky spoke today with VentureBeat CEO Matt Marshall before a crowd of hundreds at MB 2017, a two-day gathering of startups and tech giants working with AI and bots that’s being held July 11-12 at Fort Mason in San Francisco.

Testing of Messenger home screen ads began in January in Australia and Thailand. With 1.2 billion monthly active users, Facebook Messenger commands one of the largest captive audiences on the planet. While other mega chat apps with hundreds of millions of users — like WeChat — have focused on facilitating commerce, Chudnovsky says the move to home screen ads brings Facebook Messenger closer to its true business model: advertising.

“[Advertising is] not necessarily everything, but it’s definitely how we’re going to be making money right now. And going forward, there are some other business models we are exploring as well, but they’re all around ads one way or another,” Chudnovsky told VentureBeat in a phone interview.

Ads in the Home tab will follow an auction-based model and will feature the same sort of user-targeting capabilities found on Facebook or Instagram, Chudnovsky said.

The beta in Thailand and Australia sent ads to nearly all Messenger users. Average Messenger users elsewhere in the world could begin to see advertisements on their home screen by the end of the year, Chudnovsky said, though timing for the shift from beta to general availability will be based on how ads are received by users.

“We’ll start slow,” he said. “When the average user can be sure to see them we truly don’t know because we’re just going to be very data-driven and user feedback-driven on making that decision.” 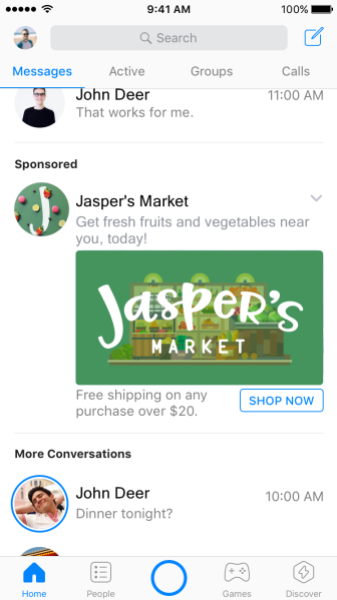 Ads on the home screen also brings Messenger closer to its goal of facilitating a connection between its 1.2 billion users and the 70 million businesses on Facebook. A desire to connect the two has been part of the Messenger strategy since the Messenger Platform for bots debuted at F8 in April 2016. It can also be seen in the Discover tab, which launched in late June for all Messenger users in the U.S. The tab showcases automated bots, as well as facilitating conversations with brands ranging from Taco Bell to Chase Bank to the University of California.

While Chudnovsky said Facebook is “agnostic” about whether an ad leads to a web page or a destination outside of Messenger, he said the best experiences come from opening conversational threads inside the chat app.

“We believe experiences that are opening [conversational] threads are going to convert better if you put enough care into building those experiences,” Chudnovsky said.

As Mary Meeker highlighted in her 2017 Internet Trends report — and Facebook has maintained since the launch of the Messenger Platform a year ago — “Customer service is shifting to chat.”

Whether the focus is on bots speaking to humans or two people having a conversation, competition in this space has increased sharply this year.

At WWDC last month, Apple debuted Business Chat to connect customers with businesses. The service, which will allow businesses to make sales or deploy bots in iMessage, is expected to arrive with iOS 11 in the fall or with a later version of the operation system.

The ability to Skype chat with a business on any website was made available this spring, as was the ability to use the Microsoft Bot Framework to publish a bot on Bing so it appears in search results. The newly redesigned Skype app includes an area much like Messenger’s Discover tab and showcases local businesses and featured bots.

At Twitter, a new conversation bot ad unit made its debut in recent weeks, as did bot buttons, as part of the company’s ongoing effort to help businesses chat with customers.

Facebook-owned WhatsApp, with its 1.2 billion monthly active users, announced plans nearly a year ago to begin allowing businesses to chat with customers. Tests with Y Combinator startups began in April, according to Reuters, but a public version has yet to launch.