Samsung brought a robot to its keynote at the 2020 Consumer Electronics Show. The tech giant took the wraps off Ballie, a small, rolling home robot with a built-in camera, microphone, and speaker. Details are forthcoming, but Sebastian Seung, executive vice president and chief research scientist at Samsung, said it’s designed to understand, support, and react to owners’ needs.

“We believe AI is the future of personalized care,” said Seung. “We see on-device AI as central to truly personalized experiences. On-device AI puts you in control of your information and protects your privacy, while still delivering the power of personalization.”

Ballie’s on-device AI enables it to serve as a fitness assistant, as well as a mobile interface that seeks solutions to various wants. It acts as a security robot, patrolling rooms at night and when folks are away during the day. It can follow an elderly member of the family around and call for help if they suffer a fall. And thanks to its local, offline processing capabilities, Ballie is ostensibly able to do all this while maintaining “stringent” data protection and privacy standards.

Ballie also tap into smart home device platforms like Samsung’s SmartThings. During the briefing, H.S. Kim, president and CEO of Samsung’s consumer electronics division, walked through a demo video that showed Ballie opening curtains, turning on a TV, and kicking off a vacuum’s cleaning routine.

Engadget notes that the “Ballie” name emerged in trademark filings last month. Samsung said it wanted to use the name for robots with various functions, such as cleaning, teaching, security surveillance, and daily chores.

This evening’s unveiling comes a year after Samsung introduced a veritable robotics platform that includes Bot Care, a robot designed to check in on elderly patients, and Bot Gems, a wearable exoskeleton. The roving Bot Care can give health briefings, check basic vitals, and make sure a patient has taken their medication. As for Bot Gems, it’s a wearable exoskeleton akin to LG’s CLOi SuitBot — a motorized suit that enables wearers to lift heavy items with ease. Other products in the portfolio include Bot Air, an air quality monitor for the home, and Bot Retail, an in-store assistant for brick-and-mortar locations. 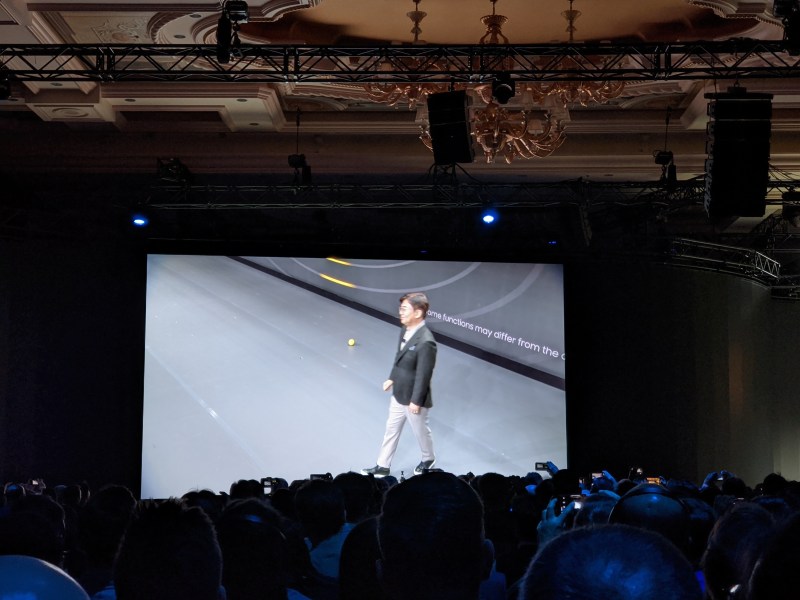 Home robotics — and robotics, generally — have proven tough to crack for even the best-funded ventures.

In April, Anki — the San Francisco startup behind AI-imbued robotic toys like Overdrive, Cozmo, and Vector — closed its doors after raising close to $200 million in venture capital from Index Ventures, Two Sigma Ventures, J.P. Morgan, Andreessen Horowitz, and others. Anki claimed to have sold 6.5 million devices in total and 1.5 million robots last August alone, with revenue close to $100 million as of year-end 2017.

But that hasn’t stopped others from forging ahead. Temi, a startup headquartered in New York that’s developing a $1,500 telepresence robot with voice assistant integration, recently raised $21 million, in part from former Alibaba chief technology officer John Wu. Separately, wellness robots like Mabu and Diligent Robotics’ Moxi have found their way into hospitals, homes, and nursing centers, where they’re doubling as orderlies and symptom trackers for chronically ill patients.

Perhaps the best-known home robot success story is that of iRobot, which has sold more than 25 million units to customers around the world. Chief technology officer Chris Jones attributes the company’s success to its singular focus on housecleaning — and to perseverance in the face of logistical challenges.

“You have electrical, mechanical, software … and all that has to come together in a practical package that actually does something valuable, and getting those to work together efficiently and effectively is a challenge,” he told VentureBeat in an earlier interview, describing the industry as an art rather than an exact science. “Every home is different — people interact with robots differently. It’s a tall order, and that’s why staying focused on practicality really matters.”