Volvo has demonstrated yet another potential use case for autonomous transport after its Volvo Buses subsidiary showcased a self-driving bus that’s capable of transporting itself around depots.

The Swedish automotive giant partnered with public transport company Keolis to configure a 12 metre electric bus that can traverse between parking bays and work stations, ensuring that it’s cleaned, serviced, and fully charged before moving back to the correct bay. As with many new demonstrations of autonomous technology, Volvo stresses that this is less about replacing humans than it is about improving efficiency and safety.

As more vehicle manufacturers commit to an electric future to cut emissions — including Volvo itself, which now only makes hybrid or electric cars — the underlying charging infrastructure is evolving to make the process as smooth as possible. OppCharge, for example, enables vehicles such as Volvo’s bus to maneuver itself into a charging position without having to mess around with cables. 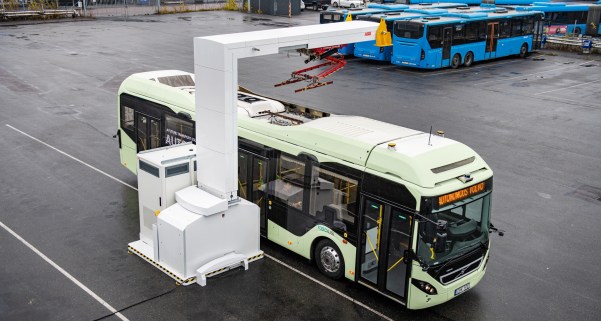 Above: Charging a Volvo bus

The bus can also be directed toward a washing hub for cleaning. 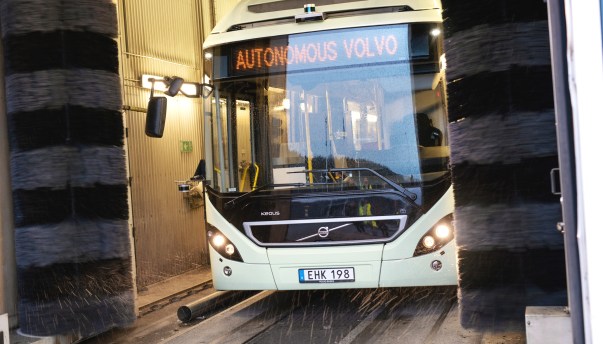 Above: Washing an autonomous Volvo bus

The process isn’t entirely human-free, as someone has to tell the bus what to do. But whoever is in charge of bus maintenance could simply tap a screen at the command center and tell a specific bus to go for a wash, for example, or to drive to the workshop.

Above: Beckoning an autonomous Volvo bus

Volvo has carried out a number of autonomous bus demonstrations before, but this latest one, which took place at a Keolis’ depot outside of Gothenburg, was among the first to occur in a real bus depot.

The bus isn’t ready for prime time quite yet, and neither Volvo nor Keolis has indicated when the bus might be rolled out to working depots. But the trial serves as further evidence that autonomous transport will seep slowly into society through industry-specific use cases. It’s all about using predefined routes and repetitive flows, similar to what Volvo Trucks has been doing with its various commercial endeavors in the self-driving truck sphere, which have included transporting materials from mines, helping sugarcane farmers in Brazil improve their crop yield, and collecting garbage.

Volvo recently committed to reporting its autonomous truck financials from 2020, giving shareholders greater insight into how the company is monetizing its driverless vehicle technologies. But this vehicle category offers a major opportunity for the world’s biggest bus manufacturer to steal a lead in self-driving transport.

“We are still many years away from seeing fully autonomous buses on public roads, but since bus depots are confined areas with predictable and repetitive traffic flows, we see autonomous buses being used there much sooner,” Agnevall added. “Working together with Keolis has given us this unique opportunity to test an autonomous bus in real conditions and will help us drive the development of autonomous solutions forward.”