When Apple debuted an internally developed A4 processor based on ARM technology in 2010, critics suggested the company was wasting precious resources creating its own chips when larger vendors were offering acceptable alternatives. But the A4’s battery life and ability to run cool made it the perfect core for both iPad tablets and iPhone smartphones, and over the subsequent decade, its sequels have improved a thousand times in performance. Today, Apple officially announced its first Mac-specific version of the A-series processor, M1, marking the beginning of the end of its dependence on Intel CPUs for laptop and desktop computers. The chip sports 16 million transistors and delivers what the company claims to be the best CPU performance per watt — two times the performance of the latest PC laptop chip, while using one-fourth of the power.

There are several key elements to the new M1 chip, which was previously referred to as “Apple Silicon,” that distinguish it from conventional Intel CPUs found in Macs. Beyond including eight CPU cores that vary in performance and power consumption, enabling the Mac to operate in low and high energy modes, Apple’s chip includes a self-designed eight-core graphics processor (GPU), a 16-core Neural Engine dedicated to machine learning tasks, and integrated processors for camera, video, audio, storage, and security features. The GPU alone promises two times leading PC laptop graphics performance at 10 watts, and it can match PC laptop chip performance at one-third the power.

Apple had previously used separate chips, including self-developed T1 and T2 coprocessors, to add security, BIOS, and audio/video input management capabilities to Macs. The new M1 chip folds this functionality into the same die as the CPU, GPU, and Neural Engine for tighter integration and power management, enabling Mac logic boards to be smaller, freeing up space that can be used for smaller chassis designs or larger batteries. Like the A-series processors in iPads and iPhones, the chip won’t require a cooling fan when used in the MacBook Air, which leads to utterly silent performance, even under load. Moreover, the chip brings up to 11 TOPS of dedicated AI performance to the Mac for the first time. 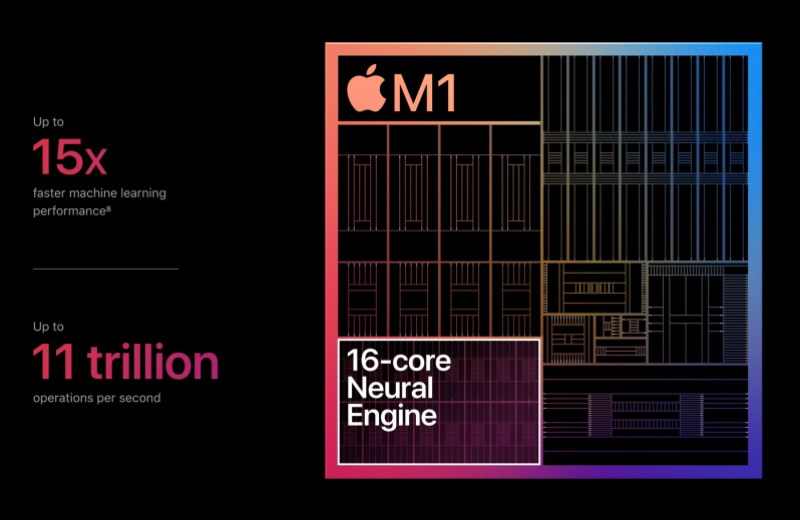 Like the A14 processors found in iPhone 12 family phones and the 2020 iPad Air, the new M1 processor uses a cutting-edge 5-nanometer manufacturing process, enabling Apple’s first Mac chip to use transistors that are measured in atomic-sized widths. Prior MacBook laptops, even models released over the past year, used Intel chips that were built using a two-generation-old 10-nanometer process, while some models use even older 14-nanometer technology due to challenges the chipmaker faced with newer production technologies. Apple’s key modem supplier, Qualcomm, currently offers 7-nanometer Snapdragon 8cx-series chips aimed at fanless laptops and convertible tablets.

Apple notably isn’t providing specific clock speeds or otherwise comprehensive specs for the M1, despite the numerous processing cores found within the system-on-chip design. Most of the specifications appear to apply across all M1 processors Apple is initially shipping across three separate Mac models — the MacBook Air, MacBook Pro, and Mac mini — but if you look carefully at the two slightly different MacBook Air models, you’ll note that one has only a seven-core GPU, versus the eight-core GPU spotlighted by Apple, and found in all the other M1-based Macs announced today. 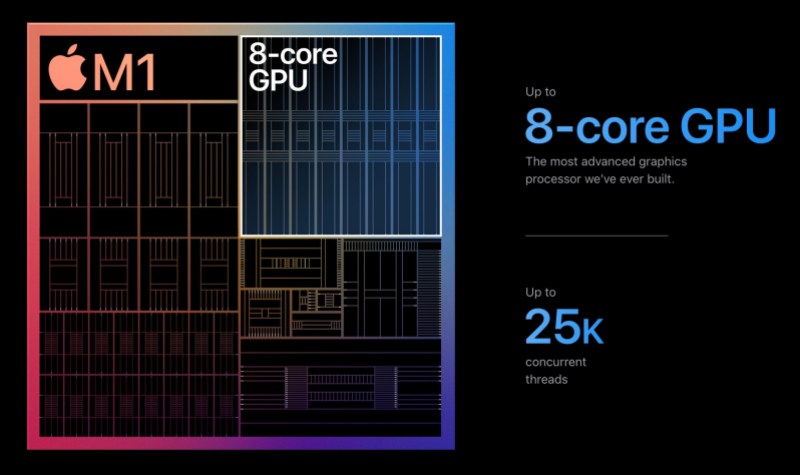 The somewhat new name indicates that this is Apple’s first chipset series to represent a deliberately different performance tier since the A5X was introduced in 2012. Apple previously used the “M” prefix for motion coprocessors in mobile devices, but appears to have repurposed it for Macs, rather than going with new prefixes such as “X1,” “Z1,” or “AS1.”

For eight years, Apple has used the “X” suffix to differentiate iPhone (“A5”) from iPad (“A5X”) chips that were based upon similar architectures and manufacturing process technologies, but more performant due to additional cores, memory, and/or clock speeds. In early 2020, it introduced the A12Z as a small step above the A12X, turning on an additional graphics core in the current iPad Pro. That chip was then used to power Developer Transition Kits to help Mac developers convert their Intel apps for ARM instruction sets.

It’s important to note that while early A-series processors used ARM-designed cores, Apple switched to its own ARM instruction set-based CPU designs years ago, relying on an internal engineering team acquired from PA Semi in 2008. The distinction is somewhat important in that Apple no longer depends on ARM to design the cores in its chips, instead holding an “architecture license” to ARM chip technology that can be used as the company sees fit. Consequently, though ARM is in the process of being acquired by GPU/AI chip powerhouse Nvidia, there’s no expected impact on future Apple chips. Apple downplayed ARM’s role in the design during the initial announcement stage of this chip back in June, instead using the name “Apple Silicon” to avoid questions over the future of its processors.