“Optimizing output,” or cutting waste, has emerged as something of a micro-trend in the investment realm. Manufacturing platforms that help clothing designers create items on-demand rather than in bulk, and a whole host of product manufacturing tools that adopt similar principles, have become attractive propositions to venture capitalists.

Cutting waste across the food chain, in particular, is a key focal point for startups and investors alike. The reason? Roughly one-third of food produced around the world each year ends up in a landfill, according to the United Nations’ Food and Agriculture Organization (FAO). This means $1 trillion worth of perfectly edible food never comes into contact with a human mouth.

Against this backdrop, New York-based Crisp has launched out of stealth today, with $14.2 million in funding and a mission to create “a more efficient food supply chain.”

The crux of the food industry’s problem managing produce, according to Crisp, is the sheer number of players involved in the process — from suppliers and brands to retailers and distributors. “At the root of the food waste challenge is a lack of communication,” the company said in a statement issued to VentureBeat.

So Crisp is looking to help by crunching big data to unlock insights.

In a nutshell, Crisp ingests and analyzes data from myriad sources with a view to helping food brands forecast their food production requirements — which can in turn inform other business decisions, such as staffing needs. Data can be gleaned from historical sales and purchase orders, promotional activity, inventory databases, point-of-sale (POS) systems, and more, with integration support for the likes of Salesforce, Netsuite, QuickBooks, Seasoft, and CSB. 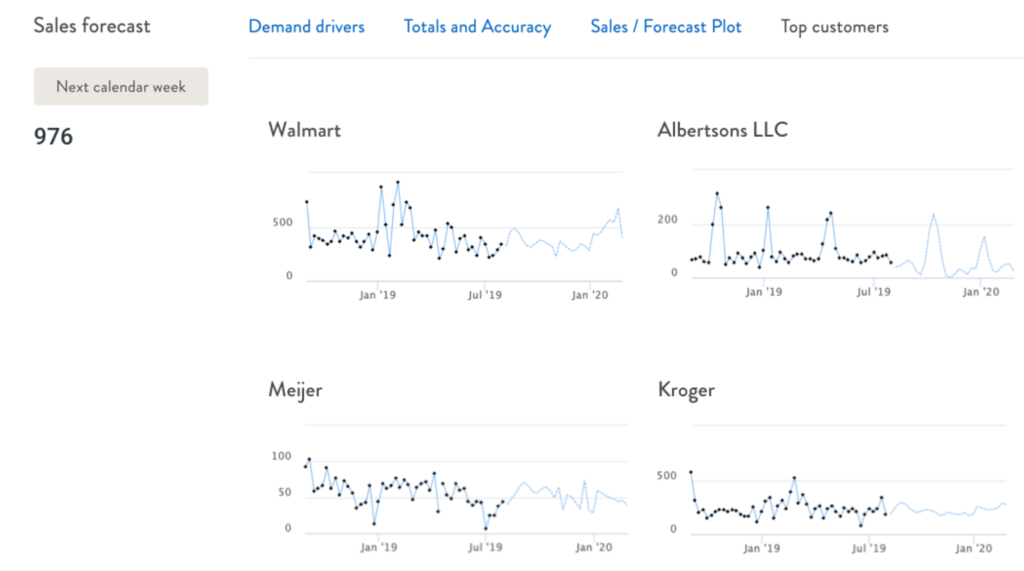 Above: Sales forecast for a food brand’s top customers

There are plenty of other parties operating in the supply chain management sphere, including JDA and Oracle, but Crisp is touting its product’s user-friendliness and the speed with which it can unlock value.

“With Crisp, the value is immediate and no IT teams or professional services are required for customers to begin using our platform,” Crisp CEO Are Traasdahl told VentureBeat. “Customers can be up and running with a reliable forecast using Crisp’s technology within fifteen minutes. By working closely with our customers throughout our design and development process, we are able to provide a platform that is intuitive and an integral part of their workflow.”

In terms of its business model, Crisp operates a freemium software-as-a-service (SaaS) platform, with prices ranging from a free trial and a basic free tier to premium plans, depending on the customer’s size and requirements.

Crisp was cofounded in 2016 by serial entrepreneur Traasdahl, who previously co-created Thumbplay, a digital entertainment service acquired by Clear Channel — now iHeartMedia — in 2011. He also founded marketing technology company Tapad, which he sold to Telenor Group in 2016 for $360 million. Traasdahl’s cofounder, Dag Liodden, was also an original founder of Tapad, where he served as chief technology officer (CTO) until 2017.

Crisp’s first external funding round was led by New York-based FirstMark Capital, which has previously backed big-name companies such as Shopify, Pinterest, Airbnb, and Discord, while Spring Capital, Swell, and HDM LLC also participated in the round.

“As early supporters of transformative companies, including Airbnb and Pinterest, we are thrilled to invest in one that has the potential to make such a significant impact on an issue that affects each and every one of us,” said FirstMark Capital founder and partner Rick Heitzman.

Crisp’s platform isn’t available to everyone quite yet — the open beta kicks off on October 1. But the company said that during its closed alpha phase it worked with 25 “enterprise and growth” food brands across fish, meat, fruit, and vegetables, including wholesalers, retailers, and distribution centers. Among these was Rema Foods, a food supplier and grocery retailer serving parts of Scandinavia, with around $8 billion in revenues.

“As both a retailer and supplier, Rema is committed to reducing waste throughout the supply chain,” said Henning Honsvall, Rema’s chief digital officer. “Crisp shares these values, and we are pleased to partner with them on tracking and tracing inventory, increased vendor cooperation, and more precise forecasting.”

A number of companies are tackling food waste from different angles. London-based Winnow, for example, uses computer vision to help commercial kitchens measure how much food they’re disposing of, while the likes of Full Harvest and Misfits Market are squarely focused on finding homes for malformed (but perfectly edible) fruit and vegetables. Elsewhere, Karma offers a marketplace that lets restaurants and supermarkets sell surplus food instead of tossing it into the garbage.

Food waste is such a problem across the world that some countries — including France and Italy — have laws in place to prevent supermarkets from discarding excess produce. But the overarching problem is that it’s often difficult to match supply with demand — which is where big data and predictive analytics can help.

“The food industry is ripe for a tech revolution,” noted Traasdahl. “The economic and environmental implications of food waste, combined with a growing world population, require us to act with urgency. We created Crisp to transform the food value chain.”