Drop, a smart kitchen platform that wants to unify what it calls the “fragmented cooking experience,” has secured $13.3 million in a series A round of funding. This comes as consumers continue to invest in contraptions that connect their home to the internet, from video doorbells to refrigerators infused with computer vision. The smart kitchen market specifically was pegged at $14.5 billion in 2019, a figure that could more than double within five years.

Drop offers a platform for connecting appliance manufacturers, recipe publishers, and grocers to home cooks. Founded out of Ireland in 2012, the Dublin-based company originally focused on hardware, developing a connected kitchen scale that was sold globally through Apple Stores. But Drop pivoted to software in 2015, with the goal of “connecting all stages of the cooking journey.” Today, that includes a mobile app with recipes, and Drop partners with multiple appliance makers — including Bosch, Kenwood, GE Appliances, and Electrolux — to tightly integrate those recipes with kitchen equipment.

“We are building the one app that orchestrates all smart kitchen appliances and delivering the full stack IoT (internet of things) platform under the hood for the appliances to work seamlessly in that world,” Drop CEO Ben Harris told VentureBeat.

This means that beyond Drop’s clients across mobile, web, and voice, it works closely with the technologies required to make smartphones talk to home appliances, including IoT firmware, Wi-Fi, and Bluetooth. Drop also gives companies insights into how consumers are using their appliances and recipes.

Users add appliances to their Drop profile, and the app “rewrites” the recipe to suit — entirely localized by region. The Drop “translation engine” converts a recipe from cups to fluid ounces or grams to milliliters, for example. Drop also sends the temperatures, cooking times, and settings directly to a connected appliance to ensure the food is cooked properly. 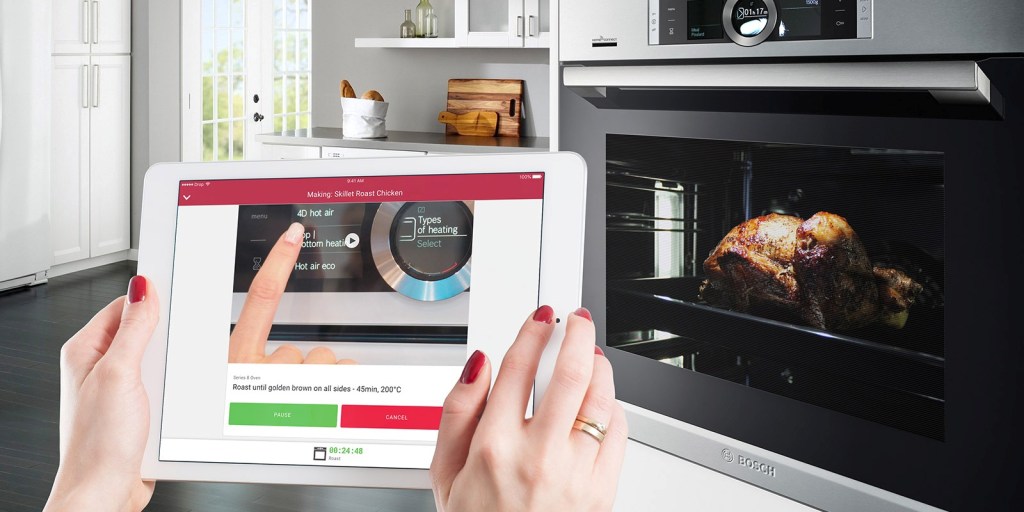 The humble kitchen is now home to all manner of connected devices, including smart faucets that let users start and stop water flow with their voice and exhaust vents with embedded touchscreens. But it’s ultimately about making food — and we’ve seen a number of contenders in this burgeoning field. Samsung last year acquired a smart food platform called Whisk, which uses deep learning and natural language processing (NLP) to build an extensive “food genome” that charts the relationships between ingredients and their individual properties. Whisk plays a big role in Samsung’s connected kitchen, underpinning the meal-planning smarts in Samsung fridges.

Drop and Whisk have different methods but a similar goal — making recipes and shopping lists work more cohesively with the modern kitchen. One of Drop’s selling points is that it’s entirely appliance-agnostic — reflecting the fact that many (or most) kitchens house multiple brands.

Drop had previously raised around $8 million, and this series A has attracted some notable backers. The round was co-led by Los Angeles-based Alpha Edison, whose partner Steve Horowitz now joins Drop’s board of directors. Horowitz left Microsoft in 2006 to spearhead Android development at Google prior to launch. Morpheus Ventures co-led the round, with managing director Ray Musci now joining Drop’s board.