Few people genuinely like change, especially when it comes to interface overhauls involving their favorite apps and websites. “That used to be there, but now I can’t find it,” is the general complaint when companies play around with their products. “Why do they have to change everything around!?!”

Against that backdrop, Google has today lifted the lid on a significant overhaul of its flagship email product, for both business G Suite users and those on the standard consumer Gmail service. While the overhaul does usher in a new look for the Gmail web app, bringing it into the material design fold, this update is more about throwing new features into the mix than moving things around and causing confusion. “We want to make Gmail the most secure, the smartest, and the easiest to use email client,” said Gmail product manager Jacob Bank, in a briefing with VentureBeat this week.

Gmail has undergone a number of facelifts and feature upgrades in its 10-plus year history. These changes have ranged from aesthetic tweaks to modernize the interface to new features that ensure users are kept up to date with the latest AI and security smarts. The most recent update is a biggie though, according to Bank. “This is the biggest one yet — a ground-up rewrite of our flagship Gmail product, with one eye toward making workers safer and more productive.”

G Suite, Google’s paid productivity service for businesses — which also includes Gmail — appears to be the core focus of this update; however these features will also be made available to standard Gmail users. “The spirit of this update is to make Gmail the best email for work,” noted Bank. “Lots of our free users use Gmail for their life’s work as well, whether they’re a student or a freelancer or consultant — Gmail is crucial to the way they manage their lives.”

News leaked earlier this month that a brand new Gmail was on the way, but now we have a clearer picture of what exactly Google is introducing. And here’s the lowdown.

Gmail hasn’t been synonymous with privacy or confidentiality, given that it used to serve you ads based on the content of your emails. However, last year Google committed to stopping this practice, though it’s worth noting that its technology may still scan your emails to provide other services.

Google is adamant that no person within the company will ever read your emails, but that doesn’t mean your email content is protected from third-party infiltration. To address this, Gmail will soon offer users a dedicated “confidential mode” — on the web and in its mobile apps — that is designed to protect against two kinds of attacks. One of those is what Bank called the “dangers that come with the permanence of email.”

So let’s say Jane sends Bob an email today with some sensitive information, and Bob’s account is later compromised by a hacker through no fault of Jane’s — well, Gmail can hold years of potentially sensitive information, putting Jane at risk. With confidential mode, however, the email will automatically expire at a time of the sender’s choosing. Or the sender can revoke it manually.

Now, this isn’t like Gmail’s Undo Send feature (which doesn’t really “unsend” anyway). With confidential mode enabled, the email content doesn’t send over SMTP — instead, Google sends the recipient a link to the content. If the recipient uses the Gmail email client, it can display the content in-line — with the appearance of a normal email — but that is just cosmetic, as it’s not actually stored in the receiver’s Gmail account. If the recipient isn’t using Gmail, they’re whisked off to a separate Google Cloud-hosted portal to view the content.

But what if Jane has zero faith in Bob’s email security hygiene and fears that an email could be compromised before it expires? Well, this is where enforced two-factor authentication (2FA) comes into play. Jane can activate 2FA for a specific message she sends to Bob, meaning that Bob will have to enter a passcode he receives by SMS to view the email.

Ultimately, this keeps the sender in control. Another notable feature of confidential mode is that it seeks to prevent “accidental” or “semi-malicious” leaks of information. All the usual features you see in an email message, such as “forward,” “download,” and “print,” can now be deactivated via new built-in Information Rights Management (IRM) controls. To be clear, this doesn’t prevent someone who really wants to save the content of an email from doing so, given that they can just take a screenshot or snap a photo with their phone — it’s more about making it more difficult for people to accidentally preserve or duplicate a private message.

Gmail users have also been targeted in the past by huge phishing attacks, which is why Google announced a bunch of new tools last month to help protect users from spurious emails. With the updated Gmail app, Google is now making the security warnings bigger and more prominent so that they catch the recipient’s attention if Gmail detects questionable activity around a specific email. 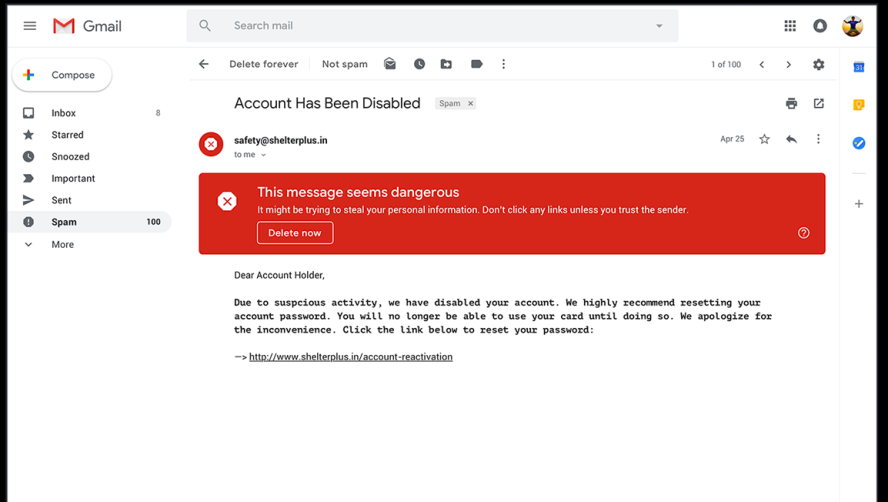 In addition to privacy and security updates, Gmail on mobile and the web is  getting a bunch of new features to help solve the perennial problem of email overload.

One of those tools is “nudging,” which leans on Google’s AI smarts and automated processing — similar to how its spam filter works — to remind users to follow up on a message they’ve received.

Google didn’t go into a great deal of detail about how this works, but it will involve Gmail analyzing your emails to figure out which you’ll likely want to reply to — note that this only applies to emails older than two days. Additionally, Gmail will detect whether you’ve asked someone a direct question over email, and if you haven’t received a response after three days, the email will be nudged to the top of your inbox so you can follow up.

“We don’t nudge very often, but when we do we can save people from making a really high-consequence mistake,” said Bank. 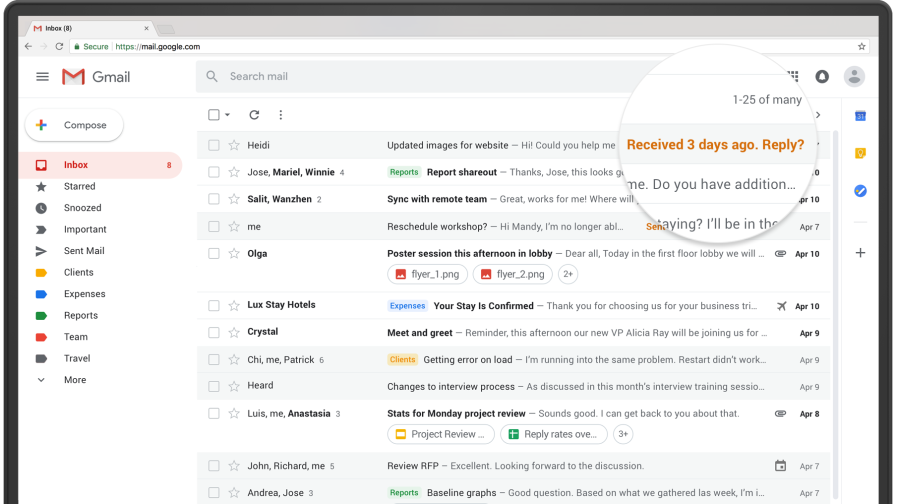 Elsewhere, Google had previously introduced smart replies to its mobile app on Android and iOS, and they also arrived on the web-based version of Inbox, Google’s other email app. Now smart replies are ready for prime time in the main Gmail web app.

The format for the web-based version will more or less follow that of the existing smart replies on mobile — you’ll have a bunch of options to click at the bottom of the message, and when you hit one of them your response is pre-populated, with the ability to add a few more words in there so it doesn’t sound overly curt. Other tweaks and features worth noting in the web app revolve around making it easier for users to take action on an email. For example, if all you care about is the attachment in an email, Gmail will now surface all attachments in the main inbox view, meaning you don’t have to click open the email itself.

Above: Attachments in Gmail

From your inbox, you can also now take specific actions on emails — such as archiving or RSVP-ing by hovering your cursor over the message. Plus, there is a new snooze option, similar to what already exists in Google’s Inbox app, that lets you delay having to deal with an email until a time specified by you.

There is also a new side panel that can be expanded out from the top corner, giving you direct access to other G Suite apps, such as Google Calendar or Keep, as well as third-party Gmail add-ons for other services your company uses.

This side panel will also be arriving in other G Suite apps later this year. Above: Gmail side panel

Gmail on mobile is also getting a couple of cool new features in the coming weeks. There will be “high-priority notifications” that tell you when you receive particularly important messages, and there is a new unsubscribe option that suggests unsubscribing from a particular mailing list that you never bother to read. These features were made available to Inbox users last year.

Though Gmail does already offer some offline functionality on the web via a Chrome extension, Google will soon introduce native offline functionality to the web app. This means you can continue working as though you’re online, though of course the actual send/receipt of emails won’t take place until an internet connection is reestablished.

Then there is Google Tasks, which has existed as a to-do list application within Gmail for years without receiving much love — until now. Tasks is finally getting native mobile apps on both Android and iOS from today, and the web-based incarnation has been given a major upgrade, too. For example, you can drag a message from Gmail into Tasks to automatically create a to-do item in your list, and those that have an assigned due date will also be added to your calendar.

Tight integrations across Gmail and the broader G Suite apps is the name of the game here.

One final point worth noting is the growing feature parity between Gmail and its smarter sibling, Inbox. So what do these latest updates mean for the future of Inbox?

“We’ve learned over the years that changing Gmail is really, really hard — lots of people rely on it to run their lives, so we don’t want to make changes frivolously or things with a lot of risk,” Bank said. “And so Inbox allows us to test things out with a more forgiving population before bring them to all of Gmail. And we are intent to continue doing so in the future.”

Put simply, Inbox is kind of like the early-adopter version of Gmail, with all the successful features of Inbox finally graduating to its flagship sibling.

From today, G Suite users will be able to access the new Gmail as part of the G Suite Early Adopter Program (EAP) which can be activated from the admin console. Consumers will also be able to start opting in from today through the settings section of their Gmail account.

Google will more proactively encourage users to switch to the new Gmail over the coming months before eventually making it mandatory.