The Surface Hub, Microsoft’s digital whiteboard designed for conferences and meetings, received a hardware refresh today. At a press event at Steelcase’s swanky New York City hub, the Redmond, Washington company detailed the improved Surface Hub 2S, which boasts a touchscreen that’s higher in resolution than the original, plus a 4K front camera that supports video calling, an enhanced 8-microphone far-field microphone array, and other improvements.

Surface Hub 2S will ship in June, starting at $8,999 and going up to nearly $12,000. (That’s the same base price as the original Surface Hub 2.) A larger version — the Surface Hub 2S 85-inch — will also be available at an as-yet-unrevealed price, and stands and wall mounts from Steelcase will be sold separately for $1,449.99 and $249, respectively.

“It’s pretty incredible — people are spending more time right now collaborating than they ever had,” said Microsoft chief product officer Panos Panay. “When it’s done right, teamwork is the most powerful tool for success. At Microsoft, we want to deliver innovation in a way that moves people forward, not just technology … We want to enable people in groups to create the way that feels most intuitive and inclusive for them.” 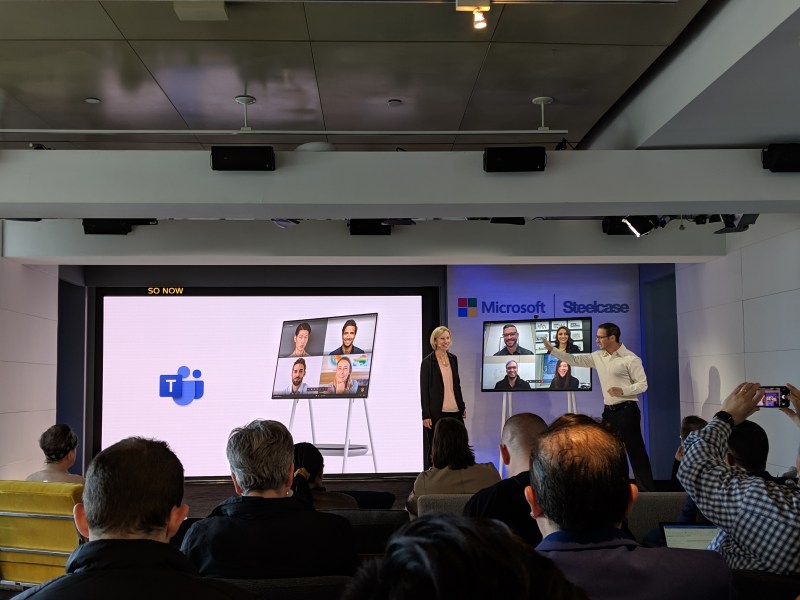 The most obvious change is the form factor. The 50.5-inch Hub 2S trades the outgoing model’s 16:9 aspect ratio for 3:2, ups the resolution to 3,840 x 2,560 pixels (9.8 million pixels total, high enough to see up to four video feeds at 1080p), features three-way speakers with built-in tweeters and a rear-firing subwoofer, and has a lighter frame. (At between 55 and 77 pounds, it’s measurably less heavy than the first Surface Hub.) Meanwhile, its 3:2 aspect ratio brings it in line with Microsoft’s Surface laptops and tablets, while the reduced size allows it to sit on a rolling easel-like stand for portability.

Microsoft says it took the sensor layer and integrated it into the display, allowing it to deliver improved contrast, faster response time, better accuracy, and higher precision. It’s got a direct-illuminated backlight, edge cover glass with bezels measuring just 15.5mm, and the lowest optical parallax in its class (according to Microsoft), all of which contribute to its ultra-wide viewing angles.

All models pack a 128GB M.2 solid state drive; integrated Wi-Fi, Bluetooth 5.0, and Ethernet; an Intel 8th Gen Core i5 processor paired with 8GB of RAM; a bevy of ports including a USB-C port, a USB-A port, HDMI video in, and Mini DisplayPort out; and a fingerprint reader. The aforementioned camera is removable — it snaps onto the Surface Hub 2S via a system of magnets — and an optional battery expansion, which costs $1,400, delivers up to two hours of power. 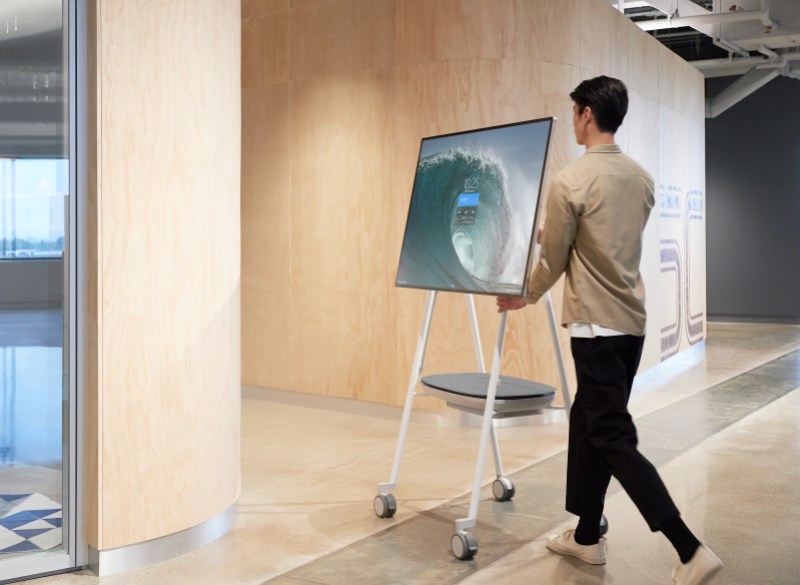 On the software side of things, Microsoft says the Hub 2S is designed to meet the needs of its existing Surface Hub customers. Toward that end, it runs the current Hub software experience built for an on-premises or hybrid environment.

Predictably, Hub 2S works with one-touch meeting join within Skype for Business or Microsoft Teams — you can include the Hub 2S in an invite, for instance, or set up it up from the Hub 2S itself — and runs Office programs like Word, PowerPoint, and Excel. Perhaps the coolest feature, though, is the preloaded Whiteboard app’s AI-powered photo conversion tool, which visually inspects what’s in any picture and turns it into editable ink.

“It does for the collaboration device what the laptop did for the desktop. That needs to happen for adaptability — that’s so incredibly important,” Panay added. “Move [the Surface Hub] across the room wherever you are, whatever space you work, or move it down the hallway and have the conversation you want to have to keep your team in flow.” 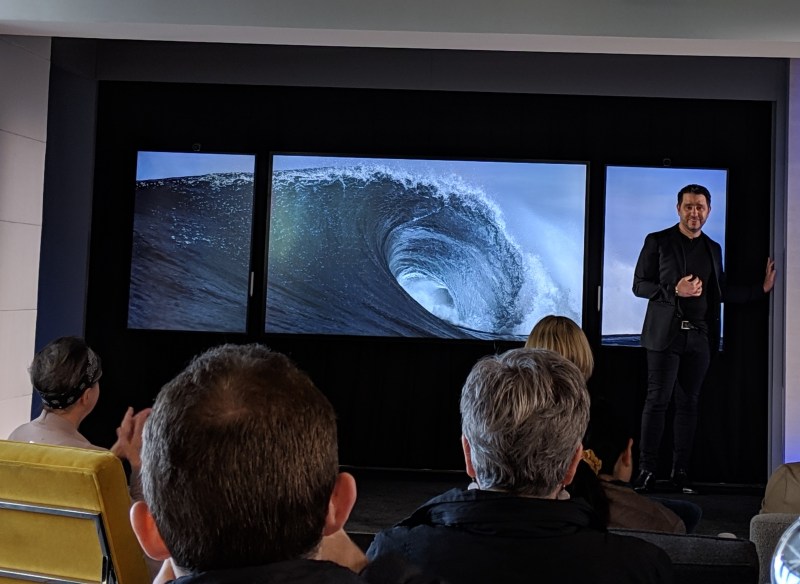 Later this year, the Hub S2 will be joined by the Hub SX, which will enable such functionality as dynamic rotation, multi-user authentication, and tiling. Hub 2S buyers will be able to upgrade to the SX thanks to removable processor cartridges in the hardware chassis on the back of the device, which Microsoft says can be serviced “over time.”

The Surface Hub 2S enters a crowded field of digital whiteboards, where it’ll compete squarely with Jamboard, Google’s $5,000 4K GSuite-optimized whiteboard, and Cisco’s $4,990 Spark Board, which runs the company’s Spark Flex enterprise subscription suite, among others.

Time will tell if it can replicate the success of the original Surface Hub, which shipped to 5,000 customers across 25 markets last year, according to Microsoft.