Pitch, a collaborative presentation software startup founded in stealth last year by the creators of the now Microsoft-owned Wunderlist, has raised $30 million in fresh funding and formally launched its product in private beta.

The series B round was led by Thrive Capital, with participation from some notable angel investors, including Instagram founders Kevin Systrom and Mike Krieger, both of whom left the Facebook-owned company last year, and Superhuman cofounder Rahul Vohra.

By way of a quick recap, Pitch was founded out of Berlin in January, 2018, though the company wasn’t formally launched until the following September, when it announced it had raised $19 million from big-name backers like Index Ventures, BlueYard, Slack, and Zoom CEO Eric Yuan. Pitch has kept the details of its endeavor under wraps as it continued to refine its product, but given that its founders include Christian Reber, Jan Martin, and Charlette Prevot — who co-created the super popular productivity app Wunderlist before selling it to Microsoft for up to $200 million — Pitch has attracted more attention than your typical fledgling startup.

This all goes some way toward explaining why a company that has yet to launch a product has now managed to raise more than $50 million in funding.

Pitch is aimed at what it calls “generation Slack” and is trying to do for the presentation software market what Slack did for the team communication and collaboration sphere. In fact, not only did Slack invest (via Slack Fund) in Pitch last year, it is also one of Pitch’s early-stage beta customers.

Pitch wants to be seen as “open” and extensible — integrating with myriad third-party apps and data streams, including Slack (naturally), Twitter, YouTube, and Excel. Pitch touts the ability to easily create “beautiful and high-quality” presentations via templates as a core selling point.

“We have a long-term roadmap and a big vision for our integrations platform,” Reber told VentureBeat. “Our ultimate goal is to potentially integrate with all of the tools teams already use and pull in data from everywhere. We’ll launch a handful of key integrations and continue to add more over time. We are focused on connecting with the tools modern teams use most, and we hope to learn a lot during the beta period about what tools are important to our users.”

Pitch promises to work seamlessly across all online and offline platforms in the browser, on the desktop, and through native mobile apps. This will include real-time syncing — with version control for effectively managing changes — through the cloud.

There is, of course, plenty of cloud-based presentation software out there, but Pitch is seeking to differentiate its standard offering with a slick and feature-rich experience. This will include smart formatting and layout tools “that give people the feeling of having a designer in support,” as Reber puts it. A built-in library of customized presentations for specific use cases is also included.

“We actually believe the biggest thing Pitch will have to offer is that the overall experience will just be so much better than existing software,” Reber said.

Above: Pitch: how it looks

In terms of pricing, well, Pitch is keeping its cards close to its chest for now. During the private beta phase Pitch will be completely free to all its users, though it will introduce a premium tier for its public launch in 2020.

“Our goal is that anyone can use Pitch, but teams who are really invested in the platform will get more out of our premium features, much like Slack or Zoom,” Reber continued. “During the course of the beta we will learn what features and behavior people value so that we can find the right balance of what’s free and what’s premium.”

As a small side note, Pitch managed to secure a much-coveted single-word dotcom domain shortly after its inception last year. In July, 2018, an online newspaper based in Kansas — called The Pitch — announced that it had sold its Pitch.com domain after nearly 20 years, without revealing anything more. As things transpired, the folks at Pitch (the presentation software startup) had contacted the Kansas newspaper with an offer.

“We literally just emailed them and negotiated a fair deal,” Reber said, without revealing a specific figure.

While this may highlight the perilous financial predicament many online news outlets find themselves in, it also shows that dotcom addresses are still valuable despite the myriad top-level domain names now available.

“It’s a big investment for us, but I think it will pay off quickly,” Reber added.

“Hundreds of millions of people rely on presentations to communicate their most important ideas, yet until now they’ve been stuck with software that doesn’t work the way they need it to,” Reber said. “Building a truly delightful user experience has always been our top priority.” 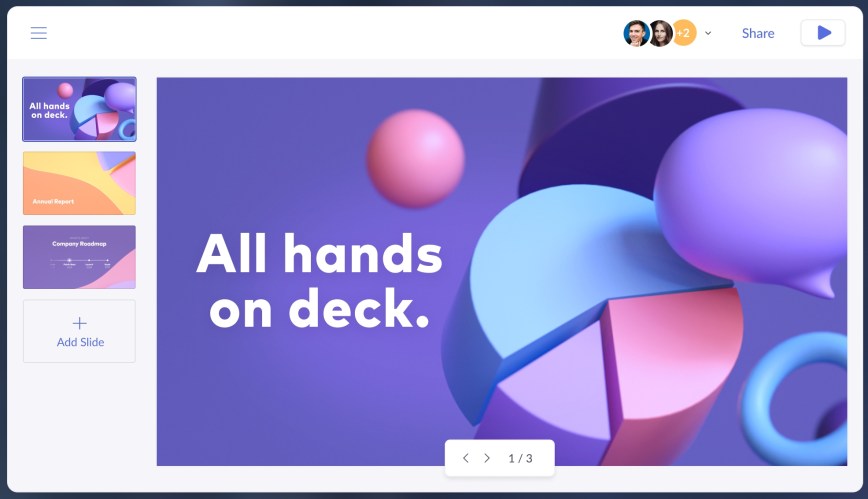 This ultimately explains why Pitch has managed to secure such an illustrious group of investors and early-stage users. Its founders — with a proven track record in building and scaling productivity software — are looking to tackle what could be a billion-dollar problem. Moreover, the lead investor in Pitch’s latest round of funding was Thrive Capital, which also invested in 6Wunderkinder before its exit to Microsoft — demonstrating that people are every bit as important as product (if not more so).

“We invest in fast-growing companies with big market potential, and Pitch is in a strong position to create a great product in a market that’s ripe for change,” said Thrive Capital’s Joshua Kusher. “The demand for Pitch is already clear [from] the thousands of companies [that] have expressed interest in the limited preview. We believe in Pitch both because of the product vision but also because of the team. As investors in Wunderlist, we built strong relationships with the founders.”

In the coming months, any company that has previously applied for access to the invite-only beta over the past year will receive word from Pitch when they are selected.

“We’re super excited to get Pitch in the hands of teams so we can continue to learn from their feedback and build the presentation software they wish existed today,” Reber added.