Google sibling Sidewalk Labs has confirmed the latest project spinout from its incubator.

Replica, originally known as Model Lab, is touted as a “next-generation urban planning tool” and began life as a Sidewalk Labs project in April, 2018. In truth, Replica Inc. has been an independent entity since March, and a June corporate filing describing its business somewhat enigmatically as “quality fish reproductions” was spotted by Redtail a few months back.

Now it seems Replica is willing to go on the record about its new life as a standalone company and has also revealed a fresh tranche of funding. But first — what exactly does Replica do?

In a nutshell, Replica leverages what it calls “de-identified location data” to figure out how people move around cities. This aggregated mobile location data comes from a range of third-party sources, like mobile phone apps, and is then combined with demographic data from public sources, such as censuses, as well as public transit data, to create what city planners like to call a “synthetic population” — think something along the lines of SimCity.

“This is a virtual population that is statistically representative of the real population, and that we can then use to model travel behavior across a city or metro area,” Replica CEO Nick Bowden told VentureBeat.

Above: Replica: Statistical simulation of how people traverse a city

In the real world, Replica is designed to help municipalities determine how many people are on a particular road, how they’re traveling (on foot, by bike, by car, etc.), and even their reason for traveling — whether going to school or commuting to the office. Armed with this information, cities can make key infrastructure decisions around transport, looking at the impact ride-hailing platforms are having on congestion or how many people are cycling (and thus whether more bike lanes are needed). Having access to real-time mobility data garnered from devices located in people’s pockets should generate far more accurate and compelling data sets than traditional mechanisms, such as surveys or manual trip counters.

Replica has so far worked with Kansas City, Chicago, Sacramento, and — as of just a few months ago — Portland. As an independent company, free from its incubation shackles and any negative association that naturally derives from being in the Google family, Replica is gearing up to launch more city partnerships later this year.

To boost this effort, Replica — which is headquartered in Kansas, with an engineering hub in San Francisco — also announced today that it has raised $11 million in a series A round of funding led by Eric Schmidt’s Innovation Endeavors, with participation from Firebrand Ventures and Revolution’s Rise of the Rest Seed Fund. 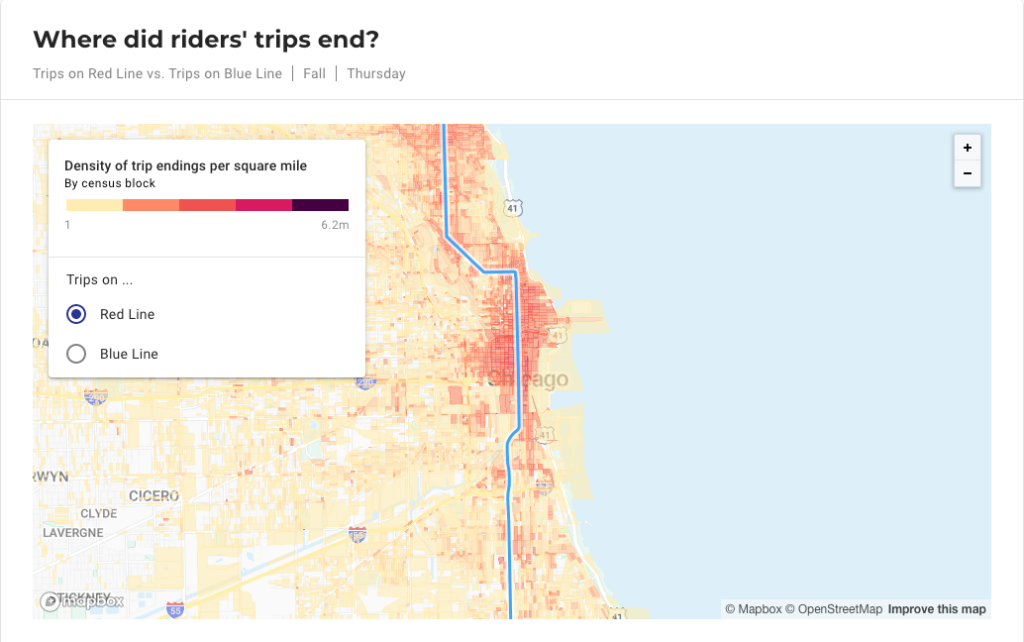 Above: Replica: Where did riders’ trips end?

Sidewalk Labs has courted its fair share of controversy since it was spun out of Google four years ago, with a stated ambition to “improve city life for everyone.” A subsidiary of Google’s holding company Alphabet since 2015, Sidewalk Labs was set up to help major conurbations improve their infrastructure — and more — by leveraging technology, including investing in and incubating companies.

News emerged back in 2017 that Sidewalk Labs would develop an area of Toronto into a futuristic smart city, replete with thermal energy grids, a mobility network with heated bike lanes, and adaptive traffic signals. But in a world that is increasingly wary of big tech company’s abuses of data in the race for profit, a backlash ensued, leading to a high-profile campaign to stop the development in its tracks. Toronto residents don’t want to be treated as “lab rats,” it turns out, with concerns about how Sidewalk Labs would store and manage all the data it garners from a turbocharged smart city. An independent panel also criticized Sidewalk Labs’ “frustratingly abstract” proposals.

Similarly, some have questioned how Replica accesses and manages the mobile location data it harnesses, and the methods used to de-identify data. This is an area of discussion that will likely envelop Replica long into the future, but the company is quick to point out that it doesn’t share the actual data with its city partners. “It’s important to note that the underlying data used to create the model is not shared with our city customers, only the resulting model,” Bowden noted.

Moreover, Bowden stressed that Replica is not interested in identifiable data.

“We never handle the original, personal information,” Bowden continued. “This data set cannot be traced back to a specific individual. Planners can use Replica to answer difficult questions about how people move around in cities, without compromising privacy.”

However, “de-identification” is really a few steps short of “anonymized.” Even if someone’s personally identifiable information is removed from a data set, it’s still technically possible to re-identify that data by combining and aligning it with a different data set that hasn’t been de-identified and spotting shared patterns. It’s not entirely clear what measures are in place to prevent this from happening, beyond any contractual promises.

Of course, spinning Replica out as a separate entity makes sense, particularly given the public’s general distrust of big technology companies. While any kind of direct association with Google’s parent company could hinder Replica’s growth and future partnerships, going it alone will help shield the startup from controversy.

Evidence of its unstated eagerness to avoid being painted with the same brush as Google can be seen, perhaps unintentionally, in apparently inconsequential details. According to the customer dashboard screenshots provided to VentureBeat, Replica uses Mapbox maps rather than Google Maps. And when asked where its data is derived from, Bowden said none of it comes from its former parent. “Neither Sidewalk Labs [nor] Alphabet data is used,” he said.

However, as Sidewalk Labs was an early investor and driving force behind Replica’s development, ties are not being severed entirely. “Sidewalk Labs has been and will continue to be an important partner in our journey,” Bowden said in a separate blog post announcing Replica’s funding.

It’s worth noting that Replica isn’t the first spinout from Sidewalk Labs. Coord, which specializes in collecting curbside data, and Cityblock, which is setting out to help low-income people access health care in the U.S., are both now blazing a trail on their own. Sidewalk Labs has also invested in a number of startups, most recently joining a $5 million seed round in Umbrella, a community marketplace for elderly people. And earlier this month it led a $20 million round in Ori, which creates robotic furniture for small urban spaces.

But Replica and former parent Sidewalk Labs represent part of a broader push to leverage the vast swathes of data that have emerged from the digital revolution. San Francisco-based Streetlight Data, for example, aggregates mobile app data to help cities measure traffic, while PredictHQ taps data from global events to help companies such as airlines and Uber forecast demand surges.

As cities increasingly realize that these data-sharing pacts are an effective way to gain insights into people and places, technology such as Replica’s can only proliferate. And with $11 million in its coffers, Replica is a name we can expect to hear more about in the coming years.

“Over the next few months, Replica will be launching in several new regions, all of [which] were involved in our initial partner program,” Bowden said. “The additional financing will allow us to partner with more agencies and roll out Replica at a much faster pace.”