Hinge Health, a fledgling digital health startup that’s building hardware and software to tackle musculoskeletal (MSK) disorders, has raised $8 million in a Series A round of funding led by European VC giant Atomico, with participation from existing seed investors, including Eleven Two Capital and the Vertical Group.

Founded in 2015, Hinge Health said that it’s setting out to use technology to combat lower-back and joint pain, which is reported to cost industry and individuals as much as $100 billion each year in the U.S. alone. Indeed, MSK disorders, such as back and shoulder pain, are one of the top medical expenditures for employers, and Hinge Health promises to drive those costs down by half.

So how does Hinge Health plan to achieve this? Through “evidence-based digital care pathways” that harness wearables, software, exercise, and behavioral therapy.

The company ships a health kit that contains two Hinge bands with embedded motion sensors, a tablet (and stand) with pre-installed Hinge Health software, a carry case, and a charging unit. 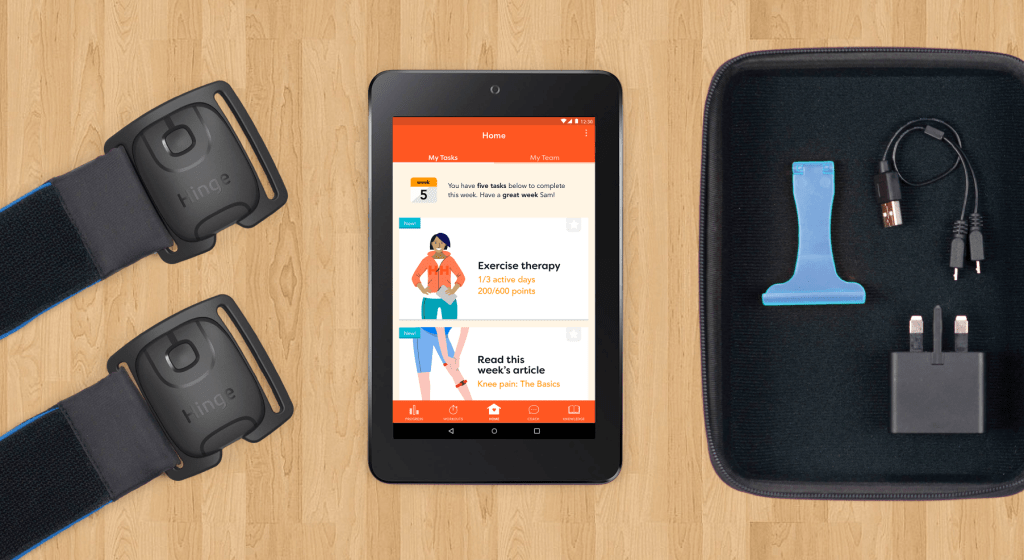 The company then delivers a “coach-led” 12-week program to fix the problem that’s leading to the MSK disorder. Besides personalized exercise coaching, it also includes cognitive behavioral therapy (CBT).

At first glance, including a tablet in the health kit seems like a needlessly expensive addition to the service, given that most people will likely have some form of Bluetooth-enabled tablet or smartphone of their own, but its inclusion hints at the target market here — this isn’t a consumer program.

“Our patients are very diverse and sometimes don’t have a tablet,” explained Hinge Health CEO and cofounder, Daniel Perez, to VentureBeat. “We prefer doing the digital exercises on a tablet, as the bigger screen is more conducive. It’s also very convenient for the patient, as the two Bluetooth sensors come pre-paired, and everything works right out of the box. Our customers’ IT departments also like that their employees on the health plan don’t have to download any extra software.”

For now, Hinge Health is only offered as part of employer-sponsored health care plans, which means this may also cover spouses and dependents. Roughly 160 million U.S. citizens receive their health care from their employer, which hints at the potential size of the market here.

In terms of pricing, well, it’s outcomes-based, but we’re told that the average price works out to around $1,195 per participant. The company wouldn’t reveal how many clients it has, but we’re told that around 100,000 people are covered overall by Hinge Health. It also name-checked two of its clients, U.S. Foods and Vail Resorts, which count around 40,000 employees between them. So when you factor in spouses and dependents, it’s possible that Hinge Health only has a handful of clients overall. That is purely an educated guess, however.

Pain in the back

According to a 2009 study by the UNC School of Medicine, some 80 percent of Americans will experience lower-back pain at some point in their lives, while other research suggests that many of the existing medical remedies are too costly and often ineffective.

Investigative journalist Cathryn Jakobson Ramin recently published her new book, Crooked: Outwitting the Back Pain Industry and Getting on the Road to Recovery, which was the culmination of a six-year investigation into the $100 billion back pain industry. Ramin concluded that many of the so-called medical fixes — which include invasive surgery that costs well into the high tens of thousands of dollars — are often unnecessary and ineffective. “People in pain are poor decision-makers,” said Ramin. In a related report, Quartz called the $100 billion per year back pain industry “mostly a hoax.”

And it’s against this backdrop that Hinge Health has gone to market.

Prior to now, Hinge Health had raised a modest $2 million in seed funding, and with another $8 million in the bank the company said that it now plans to focus on growing its sales and product and engineering teams in London and San Francisco. It will also use its fresh cash influx to expand its existing product offering, which covers lower-back and knee pain, to include new treatments for hip, shoulder, and neck pain.

“Most chronic conditions have clear clinical guidelines underpinned by a solid evidence base,” continued Perez. “However, these guidelines are often not followed because it is too onerous for the patient and doctor. Lower back pain and knee arthritis are prime examples, where non-surgical guidelines are not followed. The result is that patients are shunted onto opiates and eventually surgery. Our vision is to improve the scale, experience, and ultimately outcomes for patients by using technology to better deliver evidence-based care, with MSK as our first beachhead.”

Digital health startups have been ripe for investment over the past year. Back in March, Livongo raised $52.5 million to expand its digital health platform for those with chronic conditions, while Velano Vascular grabbed $17 million for a needle-free blood draw device. Elsewhere, Vida Health grabbed $18 million to connect people with chronic diseases to health coaches, and on-demand health care concierge Accolade closed a $93.6 million round led by Andreessen Horowitz to help employers cut health care costs. There are now even dedicated investment funds for such startups — Seattle’s Biomatics Capital Partners recently announced the closure of its first fund at $200 million to invest in early-stage health startups.

Founded out of London in 2006 by Skype cofounder Niklas Zennström, Atomico has emerged as not only one of Europe’s major VC firms, but an international powerhouse. Back in February, Atomico closed its fourth fund at a whopping $765 million, one of the single biggest funds to launch out of Europe.

“At Atomico, we believe that some of the biggest innovations in how people live over the next decade will happen in health care,” added Atomico partner Carolina Brochado. “We believe this will be driven by tech-enabled solutions that bring consistent high quality care to even the most remote places, and especially to those who might not have had access to it before.”

As a result of Atomico’s investment, Brochado will also be joining the Hinge Health board.