Tenor is hoping to take advantage of people’s infatuation with animated GIFs by launching two tools that help brands bring their message to the more than 200 million monthly users who search for the right GIF across mobile messaging apps. The company is taking the first steps in monetizing its service with the launch of a real-time analytics tool called Tenor Insights, which will educate marketers on GIF usage and the availability of sponsored GIFs.

After more than three years, Tenor wants to bring in some money, and it believes its approach is unique. What Google offers around intent and Facebook does with social data, Tenor believes it can do around emotion. Its reach is certainly vast, with integrations into Facebook, Facebook Messenger, Twitter, iMessage, and others. But in order to get brands to buy in, it needs to convince them that emotions are worth betting on.

Tenor Insights is similar to the keyword research tool that’s available from Google AdWords. It’ll report the top emotions people are expressing within messages, which can be sorted by time of day, week, or specific event, along with pertinent search terms that brands may be interested in, and insights into how different feelings are tied into GIFs. 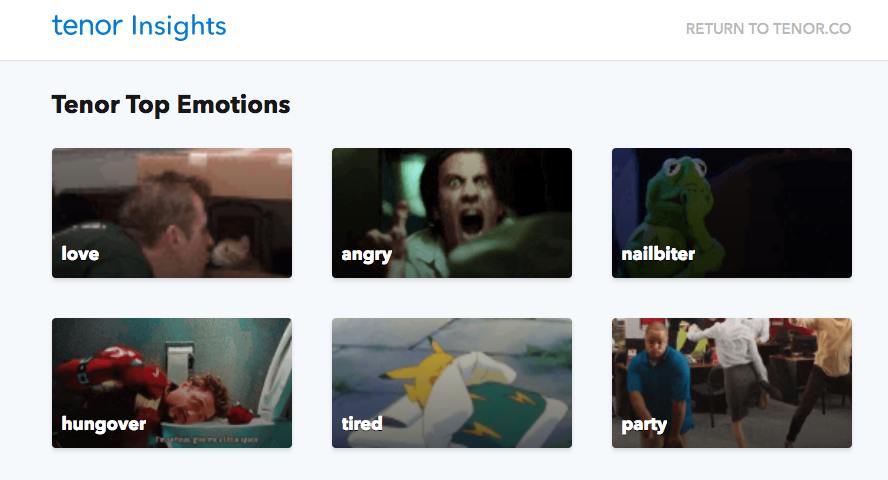 It’s said that a picture is worth a thousand words, and Tenor is banking on the idea that GIFs could result in more sales conversions than sentiment analysis or even a keyword can. When you see a happy dance GIF, it immediately tells you the sender’s state of mind — and perhaps what they’re interested in — whereas if you try to analyze their tweet, post, or message you may be limited to an overall positive or negative sentiment. And a keyword doesn’t necessarily reflect a person’s emotional state. 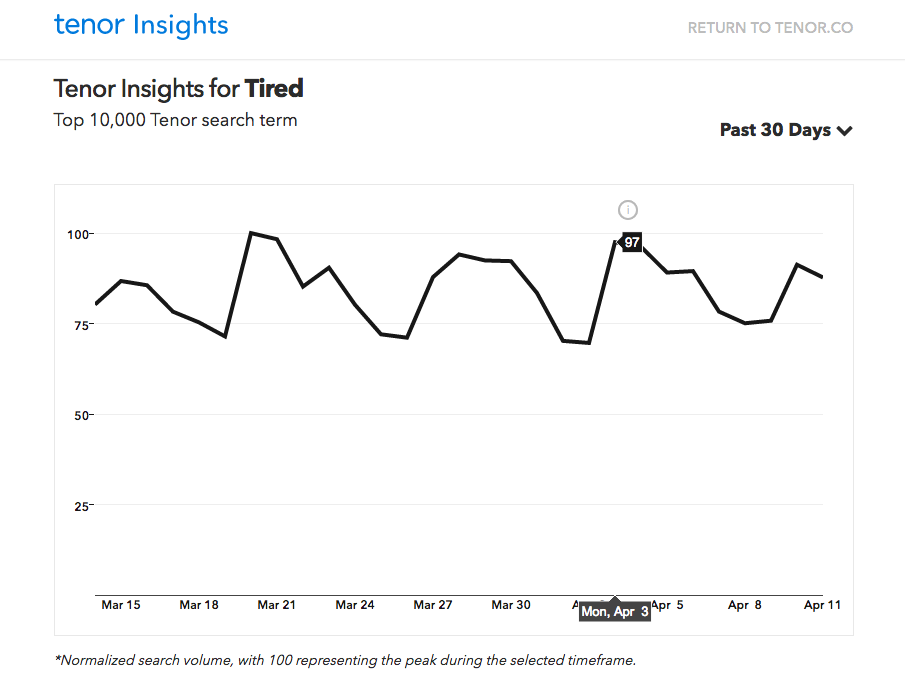 “The challenge for sentiment is that people aren’t saying things publicly at all,” stated Tenor chief executive David McIntosh in an interview with VentureBeat. Current advertising offerings are looking at the public space, such as social networks and search engines. But with GIFs, Tenor is able to cross into harder to reach areas, such as instant or text messages, and it’s here that valuable intelligence could be gathered. “Our signal is super strong. People are going to Tenor because I’m super upset and want to express that,” he said.

“We’ve never offered analytics before,” McIntosh explained. “We’ve put out data on an ad hoc basis, but now we let any marketer understand insights in what [people are] thinking, and in sheer volume. If you’re a brand, you don’t know where there’s a lot of volume around people saying ‘good morning’ and turning [users] into brand ambassadors.”

Ultimately, where the company could be going is a programmatic sponsored GIF program that lets brands bid for images that suit their campaign. You’ll start to see some of these creative GIFs in the wild, but the feature’s not available through a self-service model. Instead, brands have to work directly with Tenor’s team to implement them. Earlier this year, the company launched a pilot program around the Warner Bros. movie LEGO Batman. The program showed associated GIFs when people searched for terms like “high five,” “whoa,” “let’s go,” “smirk,” “shrug,” “flirty,” and “no.”

Helping lead the charge to develop an emotional graph and increase adoption by brands is Jason Krebs, Tenor’s chief business officer, who joined last month after a tour at Maker Studios as its head of sales. He admits that it’s “too soon to tell whether people will jump head over heels for this new paradigm,” but he said that “brands have a lot of stories to tell” and that GIFs could play an important role in the future.

“For Dominos, when someone searches for ‘best day ever’, [the pizza maker] can sponsor GIFs. It’s about giving marketers an opportunity to help customers express emotion using products they love,” McIntosh said. “With this tool, step one is to help brands understand the volume that’s out there. Most people out there don’t know how many people search ‘good morning’ every month. We want to own the visual language.”