The Telugu “text bomb” bug sounds like an Apple user’s nightmare: you get a message containing a particular character from the Indian language of Telugu, and your iPhone’s messaging apps and WiFi functionality not only crash but “keep crashing forever” without drastic intervention. Apple issued a patch on February 19, but the Telugu bug isn’t the only software problem that’s had the company in the news in recent months. Critics of iOS 11 say the update made their phones slower, drained battery life faster, and came with a host of bugs.

These issues raise questions about Apple’s quality control in general, and a look at the data suggests that a problem may have been brewing for awhile. Since Steve Jobs left Apple’s leadership in January of 2011, the frequency of iOS updates has increased by 51 percent. What does that mean for Apple users? Lots of updates, patches, and sometimes follow-up patches. For example, current iPhone owners had to contend with 15 iOS updates during the year ending January 31, 2018. By contrast, Apple only issued six iOS updates during the 12 months prior to Jobs’ departure from the company’s top spot.

This chart, compiled from a variety of sources for updates to the iPod Touch, iPad, iPhone 4 CDMA, iPhone 3GS, and iPhone 7 and 7 Plus, illustrates the rise in iOS update frequency over the decade from 2007 to 2017. 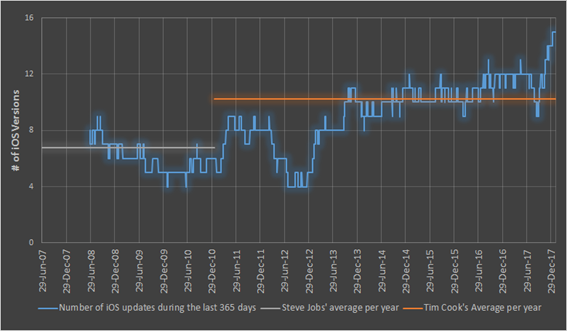 The chart shows that during the period that Jobs led Apple, the average 365-day update rate was 6.75. After his exit, the average jumped to 10.22 per year, a 51 percent increase. If we look at the same statistic before and after Jobs’ death, the increase in updates was 48 percent (not shown on the chart). The chart also shows that after Jobs stepped down in January 2011, and also after his death in October 2011, there was still a period of infrequent updates from the second quarter of 2012 to the beginning of 2013. After that, the number of updates per year stabilized around 10 each year, until the last 365 days of the study period, during which there were an astounding 15 updates.

Why are iOS updates becoming so frequent?

There are many possible explanations for the uptick in updates. One potential factor is rising complexity. Smartphones have been gaining more functionality, more apps, and more accessories that involve a growing complexity of operating system maintenance. And software updates have become more complicated, with more features required for more devices across more languages and markets than ever before. However, there’s also been a steady stream of bad news involving bugs, inattention to detail, poor performance, and security issues.

For example, Apple released the iOS 11 update in September 2017 to improve security and add features. By November, Apple had to issue an update to fix a bug that caused the lowercase letter i to autocorrect to a capital A. Users reported that iOS 11 also slowed down their phones (unless they backed up their data and did a factory reset), drew down battery power faster, gave wrong answers to math problems in its calculator, and had other problems. Indeed, the final week of November 2017 saw at least five major iOS and macOS problems, including security flaws followed by patches that introduced problems of their own. The more recent Telugu text bug, which can “crash and brick iOS devices” as well as macOS devices and Apple watches and TVs, prompted Apple to rush out a patch for the problem amid international headlines.

Is quality in decline at Apple?

The level of detail-orientation and perfectionism in Jobs’ leadership style was well-known. Widely considered a product genius, Jobs led in a unique way that’s hard to replicate. And with such a marked increase in updates and patches since his departure, it’s reasonable to ask if Apple’s product quality level is in a long-term decline without that relentless drive for perfection at the company helm. But while the update numbers seem to tell one story, other metrics tell another.

Despite the widespread coverage of Apple’s recent bugs, including some scathing headlines in the tech press, investors seem unbothered. Since Jobs passed away, the value of Apple stock has increased by roughly 240 percent. Consumers seem undeterred as well. In early February, Apple announced record revenue for the first quarter of its 2018 fiscal year, driven by highly profitable iPhone X sales. For consumers and investors alike, the luster of the Apple brand may outweigh any concerns about software issues. If the company continues to have problems with updates and patches, that luster may fade. Only time will tell.