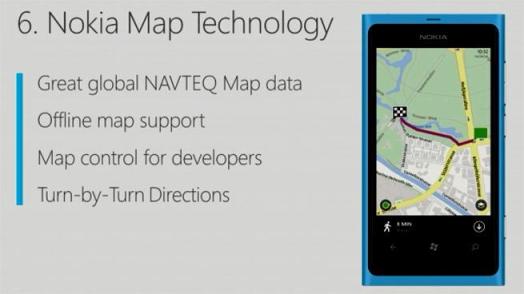 Microsoft announced today at the Windows Phone Summit that it will drop support for Bing Maps in Windows Phone 8. Instead, the operating system will rely on Nokia’s map technology.

Among the big features with Nokia Maps are turn-by-turn directions and offline availability, both of which are key features for mobile maps.

It’s been a big month for mobile maps-related announcements. Apple made a similar move earlier this month when it unveiled its own Maps app for iOS, ending its reliance on Google’s map technology.

Microsoft’s news today is a slightly different story, as Bing Maps was its own creation. While it’s unknown whether Nokia Maps will also replace the web version of Bing Maps as well, we do know this: The bond between Nokia and Windows Phone is growing more strong by the day.