Despite Google’s long-standing love affair with April Fools’ fakery, fifteen years ago today the internet giant was deadly serious when it launched what would become one of its biggest products: Gmail.

The fledgling email service was an invitation-only beta product for three years, but since 2007 it has become the number one email service on the web globally.

To mark its birthday, Google today announced a number of notable updates, including email scheduling and several expansions for its AI-powered Smart Compose tool.

Arguably the biggest of the new Gmail features is one that allows users to write an email and schedule it to be sent at a later time. This will probably be particularly useful for companies, as users can schedule an email to arrive during the recipient’s business hours in any time zone.

Interestingly, Google is also pitching this feature as part of the recent “digital well-being” trend that has led all the major technology companies — including Google — to introduce features that support “switching off.”

“We understand that work can often carry over to non-business hours, but it’s important to be considerate of everyone’s downtime,” noted G Suite director of product management Jacob Bank in a blog post. “We want to make it easier to respect everyone’s digital well-being.”

Moving forward, users will see a little arrow next to the Send button inside Gmail, and tapping on it will bring up “schedule send.” 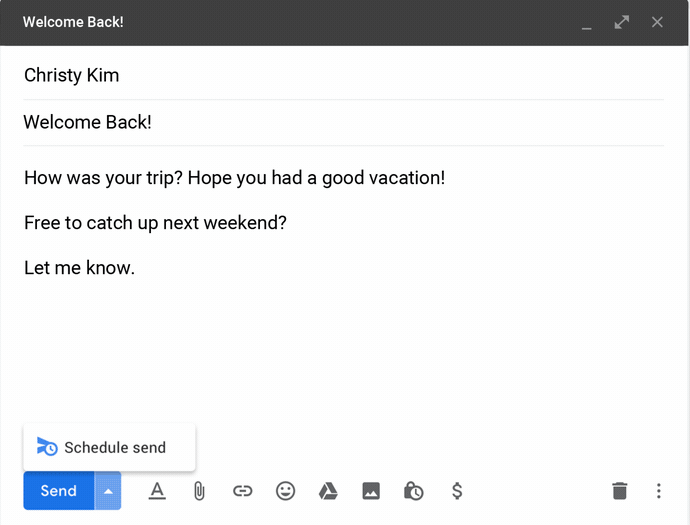 Gmail offers a handful of preset options for scheduling the email, but users can manually set any date and time they wish. 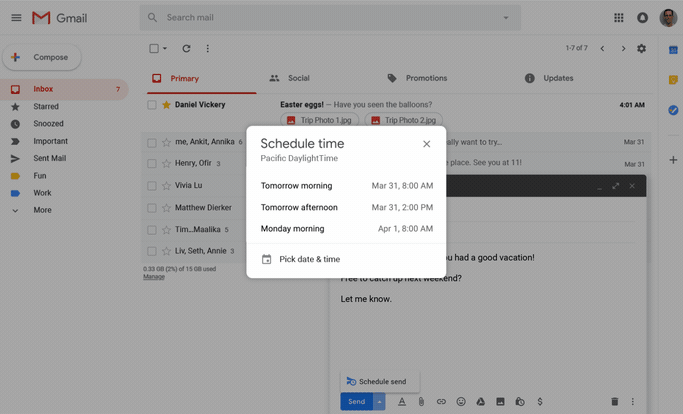 Above: Gmail: Schedule time and date

Gmail notifies the user once a time and date is set and gives them the chance to undo it — a little like the existing “undo send” feature.

It’s worth noting here that Gmail scheduling has already been possible through third-party software, but now it’s available natively as part of the main Gmail app, on both desktop and mobile.

In May of last year, Google announced a new Smart Compose feature for Gmail, leveraging AI to help users formulate drafts as they type. It’s a little like real-time auto-complete for entire emails, with Gmail serving up suggested phrases.

Smart Compose took a bit of time to arrive for all Gmail users on the web, and back in October Google revealed that it was bringing Smart Compose to the Gmail mobile app, starting off with the latest version of its own Pixel-branded lineup of Android phones. Now, however, Smart Compose will be landing inside the Gmail app for all Android devices, and it will also be coming to iOS devices “soon,” according to Bank.

Above: Gmail Smart Compose on mobile

Smart Compose was previously only available in English, but it will now be available in four new languages (as promised by Google last year): Spanish, French, Italian, and Portuguese.

Google is also making Smart Compose more useful by enabling it to adapt to an individual user’s style. If a manager prefers a casual writing style when addressing their department, for example, Gmail will observe this and may suggest “Hey team” rather than a more formal greeting. Additionally, Smart Compose will also now suggest a subject line for an email, based on the content of the message that has been written.

These latest upgrades are part of Google’s broader push to keep Gmail fresh and suitably differentiated, particularly for its business users. Just last week, Google announced it was bringing its previously revealed AMP-powered emails to Gmail, allowing developers to make static emails more dynamic — a little like a website. While AMP for Email supports all manner of third-party services, it also works with Google’s own products. By integrating with Google Docs, for example, Gmail users can see all the latest comments that have been added to a discussion thread in a single email, rather than receiving multiple emails for each comment.