Over the past two years, it’s become clear to every smartphone maker that 5G networks are about to dramatically improve the cellular speeds people see every day: roughly 10 times faster downloads than 4G at first, with the promise of upload and further download speed improvements in the very near future. When I reviewed Apple’s brand new iPhone 11 Pro — a premium-priced phone with late-stage 4G hardware inside — I knew from prior 5G testing that it wasn’t going to match or eclipse the speeds of even the earliest 5G phones. But I wanted to quantify the difference for myself.

So yesterday, I took my T-Mobile iPhone 11 Pro on a brief tour of Los Angeles to see how its real-world cellular performance compared with the OnePlus 7 Pro 5G on Sprint’s 5G network. I’m not going to waste your time with a bunch of photos or descriptions of cell sites; instead, I’ll dive right into the data after two pieces of key introductory information.

One: T-Mobile’s 4G network has been independently established as number one or number two in average download speeds across most major U.S. cities, typically either beating or losing to a top rival (often Verizon, sometimes AT&T) by a very small margin — perhaps 3Mbps, such that one carrier might deliver 24Mbps downloads on average compared with another at 21-22Mbps. In other words, other carriers might do a little better or worse than T-Mobile depending on location, but their ballpark 4G performance is pretty similar. OpenSignal recently ranked T-Mobile’s 4G network the best in Los Angeles, with an average download speed of 21.57Mbps.

Two: Sprint’s 5G network is arguably the slowest currently available in the United States, though the reality is more complicated than any pithy summary. While all three of its rivals have focused on installing new, short-distance millimeter wave cellular base stations with insane peak speeds of up to 2.35Gbps, Sprint has upgraded many of its prior, longer-distance 4G towers with 4G/5G-compatible hardware. Early testing has seen Sprint’s 5G peak in the 720Mbps range, and in my personal testing with Sprint’s 5G network in Los Angeles, I hit a top speed of 480Mbps — but I didn’t do a deep hunt for the city’s fastest cell site, or try to take measurements right next to cell towers, as I don’t think those are realistic ways of measuring real-world cellular performance.

Instead, I spent some time driving through the streets and highways of Los Angeles to see what performance was like on both the iPhone 11 Pro ($999 entry price with 64GB, $1,149 with 256GB) and OnePlus 7 Pro 5G ($840 entry price with 256GB). Even on L.A.’s fastest 4G network and an atypically slow 5G network, the differences were generally stark. 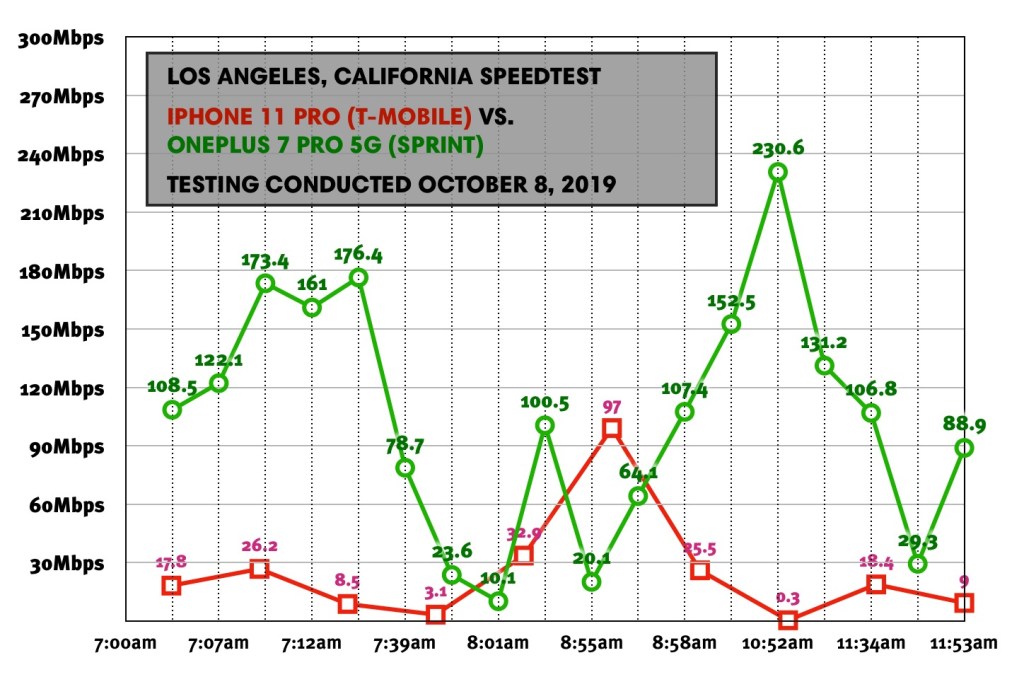 As you can see from the chart, the real world speeds tended to be 6-7 times faster on Sprint’s 5G-aided network than T-Mobile’s 4G, though there were times when the difference was larger or smaller. My results track with Ookla’s August 2019 report of up to 7.5 times faster 5G than 4G speeds, though you can get a more granular sense above of how the numbers vary from cell site to cell

site. Only at one point during my testing did T-Mobile’s network rocket ahead with a nearly 100Mbps result compared with a 20Mbps Sprint speed — notably still showing a “5G” connection — but in most cases, the latest, top-of-line iPhone’s cellular download speed fell markedly behind the performance of one of the world’s most affordable 5G phones.

A few caveats are worth noting. The best Sprint 5G download speed I saw during my road and highway testing was just under half the peak speed I’d achieved previously, and about one-third the peak speeds Opensignal reported. As expected, there were some areas where the OnePlus 7 Pro’s on-screen indicator flipped between 4G and 5G icons, though its speeds tended to be stronger than T-Mobile’s regardless. And upload speeds were another story entirely — they haven’t yet been upgraded for 5G, a step that’s expected to happen next year, and mostly hovered from 3-37Mbps on Sprint’s 5G compared with 4-53Mbps on T-Mobile’s 4G.

I also need to emphasize that the issue isn’t so much that the iPhone 11 Pro’s performance was terrible as that 5G is capable of delivering a step change in real-world cellular speeds, even when comparing the latest, highest-end 4G Apple device to a more affordable 5G Android device. As noted in my iPhone 11 Pro review, Apple’s custom A13 Bionic processor offers class-leading on-device processing power for apps, games, AI, and photography, and if it’s connected to a fast enough Wi-Fi network, it can download at over 600Mbps speeds, a feat I replicated multiple times this morning alone. Its limitations are cellular-specific, and as much due to stagnant 4G networks as Apple’s aging 4G hardware.

That having been said, there’s no question that if you’re using a 5G phone in the right city today, you’re going to see cellular speeds far better than any iPhone can deliver, even if you’re on a 5G network like Sprint’s that prioritizes continuous 5G coverage over raw transfer rates. And based on continued innovations from 5G chipmakers such as Qualcomm, Samsung, and Huawei, the 4G-5G performance gap is already widening right now, and will continue to grow as newer, better, and more 5G base stations spread across the world. That’s great news for Android fans, and thanks to the belated Apple-Qualcomm reconciliation earlier this year, should bring stronger speeds to iPhone users at some point in 2020.