If you’ve been wondering how much additional speed 5G devices are already delivering for early U.S. adopters, Speedtest developer Ookla is ready to quantify the numbers, and they’re impressive: Devices using Qualcomm’s first-generation Snapdragon X50 modem achieved up to 750% faster 5G speeds than 4G/LTE in July 2019, and new technologies in its next-generation X55 modem will likely blow past those numbers.

While Ookla isn’t the first to publish an early 5G performance study — and its numbers are dramatically different from Opensignal’s first 5G findings in June 2019 — the former company notes that it looked specifically at U.S. results from two 5G phones, Samsung’s Galaxy S10 5G and LG’s V50 ThinQ 5G, both with Snapdragon X50 modems. Unlike rivals, it says, it uses controlled saturation tests that accurately gauge client-side connections at up to 10Gbps, rather than downloading very small and unrepresentative files. It also restricted its findings to Verizon and Sprint, which were actively offering consumer 5G service throughout all of July, while AT&T 5G still isn’t available to consumers and T-Mobile commenced consumer 5G service mid-month.

By comparison, Opensignal’s report aggregated data solely from South Korea, and covered a period stretching from the country’s rocky initial 5G launch in April through June 12. It looked at results across three networks and multiple 5G chipsets, including Samsung’s self-developed Exynos 5100 5G modem, all of which exclusively use mid-band, sub-6Ghz frequencies for 5G in Korea. 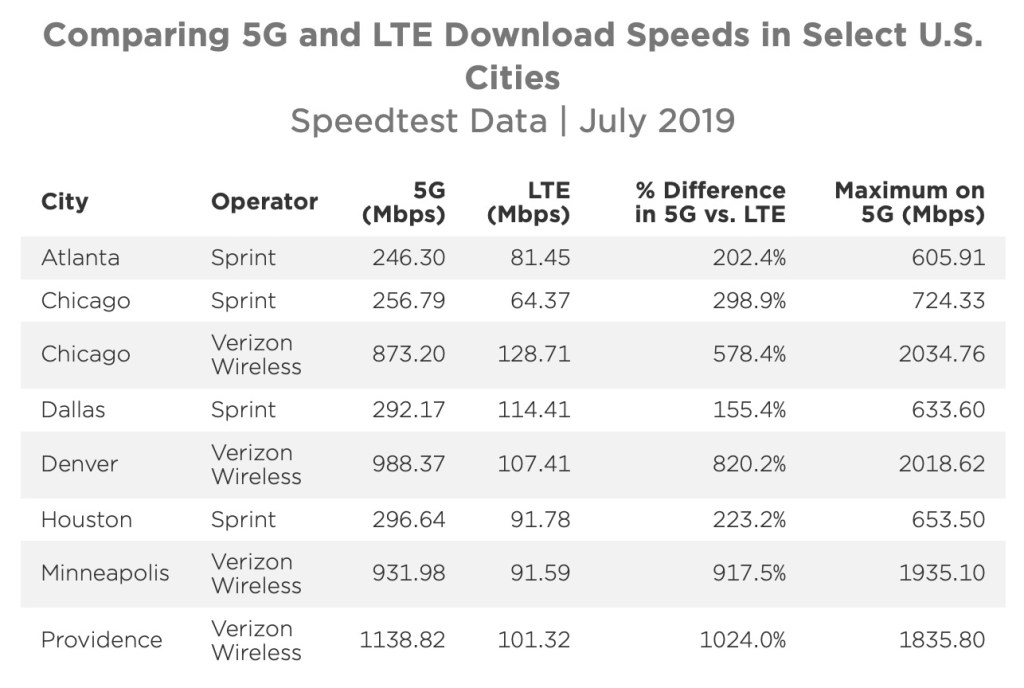 Strictly speaking, the numbers aren’t completely shocking, as they’re close to what the carriers have suggested to journalists — if not marketed to the broader public — as their typical and peak performance levels. But Verizon’s average is higher than the 600Mbps people might have expected, and its 2.35Gbps peak is even better than the 2Gbps it said it would be delivering this year. Sprint’s 236Mbps average isn’t fantastic, but it’s a lot better than its struggling 4G, while its peak is pretty solid for what’s known as “sub-6GHz” 5G.

The numbers notably aren’t consistent from city to city, though. While Ookla saw an average of 1.138Gbps on Verizon’s 5G network in Providence, Rhode Island, compared with 101Mbps on its 4G network there, the speed in Chicago was only 873Mbps. Sprint’s city averages were closer, ranging from 246Mbps in Atlanta to 296Mbps in Houston, but its peaks ranged more significantly, from 605Mbps to 724Mbps.

Ookla suggests that the Snapdragon X50’s numbers are just the start for 5G performance, as the X55 is coming to phones later this year, starting with the U.S. versions of Samsung’s Galaxy Note 10+ 5G. The X55 will add support for dynamic spectrum sharing, frequency division duplex spectrum allocation, and low-band (600/700MHz) 5G, all of which could enable carriers to utilize previously under-tapped radio frequencies to deliver high-speed 5G services. Additionally, Samsung might also add antennas to the Note 10+ 5G to enable more carrier aggregation, a feature that combines frequency bands to deliver faster long-distance 5G coverage.