Third-place U.S. carrier T-Mobile today made good on its earlier promises of a nationwide 5G network in 2019, establishing a blanket of low-band 5G service using 600MHz wireless spectrum — several days ahead of its prior schedule. The company says that it’s covering over 5,000 cities and towns across the United States with 5G, representing over 200 million potential customers, though the large low-band network’s speeds are unlikely to match those offered by rivals.

According to T-Mobile, customers should expect to see a 20% download speed improvement using 600MHz 5G compared with the carrier’s LTE network, but that number will “get exponentially faster over time.” In “some places, 600MHz 5G will be a lot faster than LTE,” the company told VentureBeat, while in others, “customers won’t see as much difference.” Customers won’t be charged extra for accessing the 5G network, but will have to buy new phones to use it — and those who use over 50GB of data in a month will be subject to reduced data speeds.

As of today, T-Mobile is offering two 5G phones capable of accessing its 600MHz network: the OnePlus 7T Pro 5G McLaren, which is being sold for $900, and Samsung’s $1,300 Galaxy Note10+ 5G. Each of the phones can be had for “free” after monthly bill credits — the OnePlus model in 24 installments, versus the Note 10+ 5G after 24 or 36 credits, assuming an existing customer adds one line or a new customer adds two lines. The devices are available for preorder now, and will be in stores on December 6. 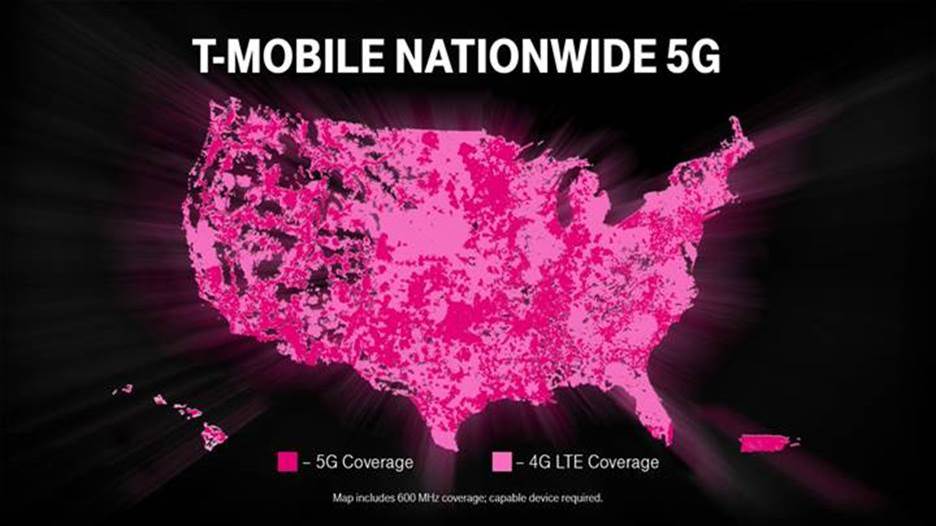 T-Mobile’s initial 600MHz 5G coverage map doesn’t include the entirety of the United States, but comes much closer than any competitor, including towers on the coasts and within the center of the country. By comparison, larger competitors Verizon and AT&T are offering 5G to consumers in only a handful of cities, largely using higher-speed but shorter-distance millimeter wave towers, with plans to expand their footprints nationwide in 2020 and 2021.

It’s worth noting that this isn’t T-Mobile’s first 5G launch — the carrier previously offered high-band millimeter wave 5G in a handful of U.S. cities using a different phone — and that T-Mobile is still in the midst of merging with Sprint, the fourth-place U.S. carrier with an existing mid-band network. Sprint’s network promises “average” 5G speeds of 200Mbps with peaks in the 600-700Mbps range, considerably faster than T-Mobile’s low band network. The two new T-Mobile phones will be able to connect to Sprint’s 2.5GHz towers for 5G service if the merger goes through, but apparently aren’t able to use T-Mobile’s existing millimeter wave network.

T-Mobile says that it will begin offering the U.S.’ first nationwide prepaid 5G service via its Metro brand on December 6. The carrier is also promising over 15 new 5G smartphones in 2020, “with a variety of price points and features.”