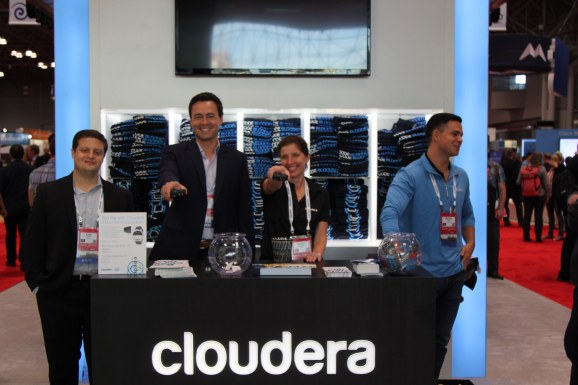 For the year ended January 31, the company lost $187 million on $261 million in revenue, according to the filing. The year before, Cloudera turned up a $203 million loss on $166 million in revenue. The majority of Cloudera’s revenue comes from subscriptions, which are generally sold for one- to three-year periods, but the company is also dependent on services. Services include professional services, training, and education.

Cloudera sells a distribution of the Hadoop open source software for storing and processing lots of different kinds of data. Cloudera’s competitor Hortonworks went public in 2014. Another Hadoop-based competitor is MapR. Building large businesses around open source software has traditionally been challenging, and in that regard many startups have longed to be the next Red Hat after the Linux distribution seller went public in 1999.

Traditional database and data warehousing companies like IBM, Oracle, SAP, and Teradata are mentioned as competitors in the filing, but so are public cloud infrastructure providers like Amazon Web Services (AWS) and Microsoft Azure, which companies can use to run Cloudera’s software. One business risk cited in the filing is Cloudera’s dependence on the Apache Software Foundation (ASF), which manages various pieces of software that Cloudera builds on for its commercial offering.

The company recently introduced cloud services; in the coming years, the company will increasingly focus its marketing attention on smarter systems like IBM Watson, as well as AWS as a whole.

Founded in 2008, the company had 1,470 employees as of January 31 and more than a thousand customers, according to the filing.

Cloudera has been expected to go public for years. The company filed confidentially earlier; today’s filing is listed under the name Project Thunder.

Investors include Accel Partners, Greylock Partners, and Intel. As of January 31 Intel owned 22 percent of Cloudera, following a major funding deal on the part of the chipmaker, rather than its corporate venture arm, in 2014.

In May 2014 Cloudera sold 11.9 million shares of its Series F-1 preferred stock to Intel for $370.9 million, the filing says. But first, one month prior to that, Cloudera “agreed to waive certain transfer restrictions” for capital stock from certain shareholders, including Accel and Greylock, for a tender offer from Intel. Employees were also allowed to participate, and cofounder and chief strategy officer Mike Olson did, as did chief financial officer Jim Frankola. All told, Cloudera sunk $741.8 million into Intel, between the funding round and the transfers of ownership, according to the filing.

Chief executive Tom Reilly received $4.6 million in compensation including stock awards for the year that ended on January 31; for the prior year he got $7.3 million, according to the filing.

Okta and Yext are also looking to go public. Snap went public last month, and Alteryx and MuleSoft did this month.