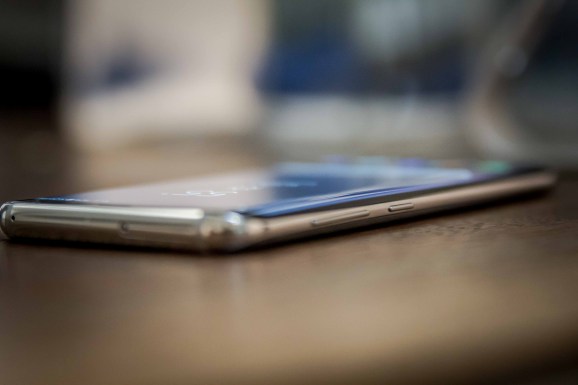 Samsung's Galaxy S8 has a near bezel less display that wraps around the device, with a screen covering 83% of the phone.

As the battle for intelligent assistants slowly transforms into a war, with Amazon, Apple, Google, Microsoft, and Samsung all eager players, I can’t help but think that two of these companies should be working together. Microsoft is the smartphone underdog and Samsung is the assistant underdog, so why not team up?

Imagine if, instead of Bixby, the dedicated button on the Galaxy S8 launched Cortana. Microsoft would benefit from having its virtual assistant on the most popular Android phone of the year, not just in terms of market share and mindshare but also in terms of usage and user data that could in turn be used to further improve the service. Samsung, meanwhile, wouldn’t have to deal with embarrassing delay after delay and rush-shipping something based on its Viv acquisition. Instead, it would be able to offer a superior experience right out of the box.

To be fair, there’s no way of knowing how the timeline played out here. Maybe Microsoft still thought Windows Phone had a fighting chance and wanted to make sure Cortana was a differentiator when Samsung started developing Bixby. Maybe Microsoft floated the idea and Samsung simply said no. Maybe both companies concluded it was a bad idea. Either way, I’d wager it was at least discussed.

The biggest hint is the Samsung Galaxy S8 “Microsoft Edition”. Samsung bundling Microsoft apps on its Android devices isn’t new, but having a phone just for this purpose certainly is, as is the app lineup: Not just Office, OneDrive, and Outlook, but also, you guessed it, Cortana for Android.

It’s almost as if the a bigger deal fell apart and this was the consolation prize. “OK, you can include Cortana even though this is Bixby’s big debut, but you have to sell and market this special edition phone in your stores.”

Speaking of selling other products with Cortana, there’s a ton of hype around smart speakers as Apple and Microsoft look to join the fight against Amazon and Google this year. A Samsung patent from last month points to a potential Bixby speaker, but that might never see the light of day. On the other hand, one of Microsoft’s partners planning to release a Cortana speaker this fall is none other than Samsung’s Harman Kardon. You can bet it will be available at Microsoft stores.

Still, smart speakers are a very niche market — assistants on ubiquitous smartphones matter a lot more. There’s always the Galaxy S9, of course, but now that Samsung has developed Bixby, it’s not going to give up that easily. And that’s really a shame.

If Samsung really wants to replace Google Assistant on its phones, it needs help. The South Korean company should have learned this lesson already, in its attempt to replace Android with Tizen.