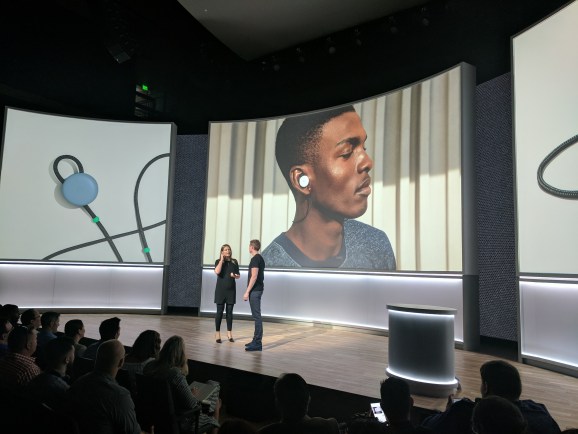 Google today unveiled Pixel Buds earbuds, the company’s first pair of wireless headphones. When paired with an Android smartphone with Google Assistant installed, Pixel Buds delivers notifications, reads text messages, or plays music; when using a Pixel or Pixel 2, it can carry out real-time translation of 40 languages. Pixel Buds will be available for purchase for $159 in November. Preorders for U.S. consumers begin today, while Google Pixel Buds will come to Singapore, U.K., Germany, Canada, and Australia later this month.

Translations will be available in 40 languages, including Finnish, Swedish, Spanish, Japanese, and Hungarian.

Pixel Buds comes with up to 5 hours of listening time with one charge, or up to 24 hours of charges via its carrying case. Pixel Buds will be available in three colors to match the Pixel 2s: Clearly White, Kind of Blue, and Just Black.

Headphones made by Google have long been anticipated. An FCC filing for Google-branded wireless headphones and reports of a project code-named Bisto first emerged in April.

At an event held at the same time last year, Google brought a variety of devices to market, including the Pixel and Pixel XL smartphones, Daydream VR headset, Google Wifi, and Google Chromecast 4K Ultra, and it announced plans to launch the Actions on Google platform for third-party developers to create voice apps for Google Assistant.