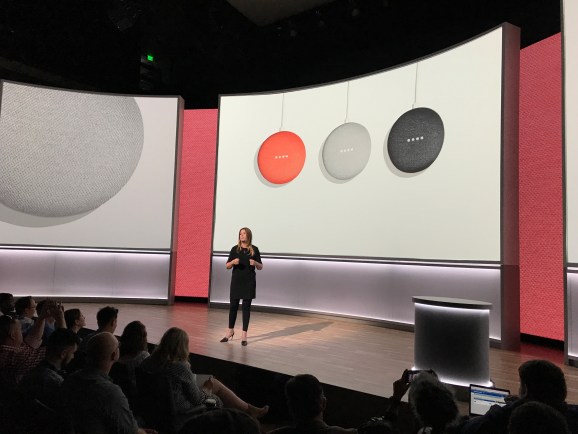 Google today unveiled the Google Home Mini, a smaller version of its flagship smart speaker. The device will retail for $49. Preorders begin today and go on sale in stores October 19.

Home Mini will come in coral, chalk, and charcoal. Like Home, the new Home Mini will come with a set of colorful LEDs atop the device that light up after you say “Hey Google” that let you know Google Assistant is listening and waiting to hear a command.

“Give the fabric a quick tap to pause music, change volume, or talk to Assistant,” said lead designer for home hardware Isabelle Olsson.

Home Mini will be available in the U.S. as well as United Kingdom, Japan, Canada, Germany, France, and Australia.

And like other devices from Google or those using the Google Assistant SDK, Home Mini will be able to do a broad range of things, such as tell you about your calendar events, share news, play music, order products from major retailers, and access hundreds of conversation action voice apps made by third-party developers.

The speaker made its debut at Google’s biggest hardware event of the year held today at the SFJazz Center in San Francisco. Also unveiled today are the Pixel 2 and Pixel 2 XL, Google Home Max, and Pixelbook, Pixel Bud Earbuds, and Clips, an add-on camera that can be paired with the Pixel 2.

A smaller smart speaker gives Google footing to compete with the Echo Dot. Amazon’s cheapest and possibly best-selling Echo product also retails for $49. Few details on the actual number of Echo Dots sold have been shared, but during Prime Day this summer Amazon said the device was the best-selling product.

While the brand name of a smart speaker like Apple and Amazon and Google matter to people, price trumps all. According to a survey from Morning Consult, price is the most important factor for consumers shopping for smart speakers.

Plenty of news about the device leaked before an announcement was made onstage today. Walmart began listing the Home Mini for sale for $24 on its website yesterday via Google Express, reports 9to5Google, and multiple outlets reported details and shared photos of the Home Mini in weeks ahead of the hardware event.

Since the arrival of Google Home late last year, Google Assistant has expanded to washing machines, General Electric appliances, and Mercedes-Benz vehicles, and is widely expected to be extended today for the first time to a notebook, the Pixelbook. The Google Assistant iOS app was made available in May.