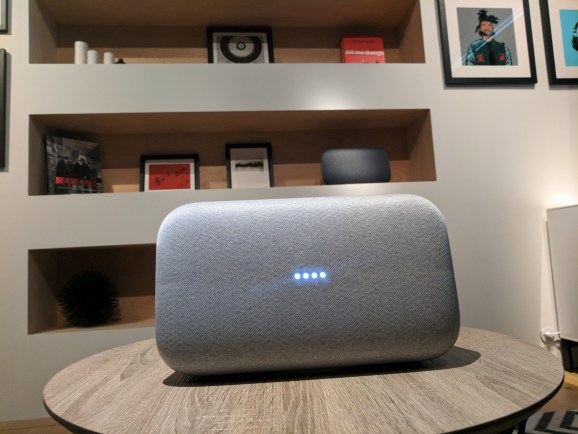 Google today unveiled Home Max, a premium smart speaker for $399 available in December. The newest speaker from Google will come in chalk and charcoal colors.

Home Max can work with the Home and Home Mini and comes with Google Assistant inside, which is made to hear your voice even when music is playing loud. It can also be paired with more than 250 other devices that can Cast with Chromecast to play music or the voice of Google Assistant.

“Max is more than 20 times more powerful than Google Home, so it will fill any room in your house with great sound,” home lead Rishi Chandra said onstage at SFJazz Center during Google’s biggest hardware event of the year. Also unveiled today are the Pixel 2 and Pixel 2 XL, Google Home Mini, Pixelbook, Pixel Bud Earbuds, and Clips, an add-on camera that can be paired with Pixel phones Samsung’s Galaxy S7 and S8 devices, and Apple’s iPhone (6 and up).

While the Home Mini debuted today to compete with the Echo Dot and low-cost smart speakers, the Home Max will compete directly with high-end smart speakers like products from Sonos, recently unveiled Echo Plus, and Apple’s HomePod.

Just like the Home Mini and original Home, Google Home Max has an array of LEDs that light up each time you say “Hey Google.” When the device’s microphone is muted, the lights go orange.

A magnetic base that cradles the device can hold in either horizontally or vertically. Whichever way you choose to stand a Home Max, volume can be turned up or down by sliding a finger along the long side of the device.

Google Assistant devices like the Home Max are able to recognize up to six unique voices at one time, so each time someone in your house says “OK Google, play my workout playlist,” Google Assistant knows which particular person is asking for music from a playlist.

Max will play personalized playlist and acts as DJ, so you use your voice to play certain artists, raise or lower volume, music genres, or sing it a hook to have the DJ attempt to identify the song. Max also uses Smart Sound, an audio experience powered by AI that adapts to your preferences, providing spatial sound based on where you place the speaker in the room, just like Apple’s HomePod, which is also due out later this year.

Max will also automatically adjust to lower volume in morning, raise the volume when the dishwasher is running, and change the volume if you’re listening to news or music.