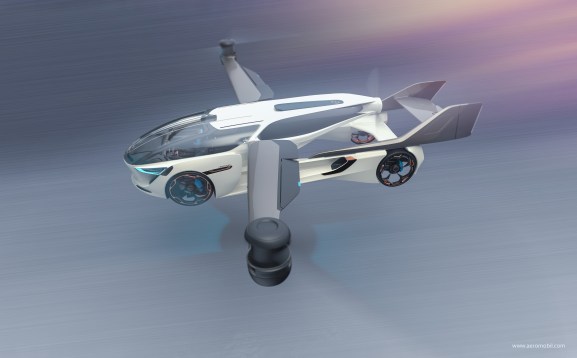 Slovakia-based AeroMobil plans to expand its lineup of flying cars to include an electric version that allows for vertical takeoffs and can also drive around cities on roads.

The latter requires a bit of runway to lift off, meaning it won’t be suitable for urban environments. Instead, it’s focused on inter-city travel, and it is currently in testing with the goal of delivering the first cars to clients in early 2020, the company said.

The company debuted its 3.0 STOL prototype in 2014. It has been taking preorders for the 4.0 STOL, with prices starting at $1.3 million.

The AeroMobil 5.0 VTOL is still in the early stages, and the company projects it could be ready within the next “seven to 10 years.” That extended timeline factors in the need to develop infrastructure and regulations that permit flying cars and taxis.

The new VTOL version will be propelled upward by motors at the edge of two wings, and the company says it is developing a host of new features that allow the car to adapt to conditions to maximize stability and travel distance. It will have space for four passengers and personalized inflight communication and media options for each.

Of course, the flying car competition is growing surprisingly intense as plenty of upstarts and giants take on investment to make this dream a reality. AeroMobil will have to move quickly if it doesn’t want to get left behind.