If you go to Apple’s App Store today and search “Siri,” you’ll find a collection of apps that connect with the AI assistant to help you do things like hail a Lyft, send a WhatsApp message, or send money to a friend with Square Cash. What you might not find without considerable effort is a quick explanation of how Siri interacts with each app, nor will you see a breakdown by category or functionality.

Shortcuts for custom actions, introduced at WWDC today, can carry out tasks across iOS apps, and they appear to be a step in that direction. It’s Apple’s way of telling every developer building iOS apps that something valuable might actually come from integrating Siri into their app.

Siri integrations with third-party apps are currently limited to 12 specific use cases, like scanning a QR code, hailing a ride, or sending a message. Onstage at WWDC, Apple executives demonstrated how Shortcuts will make it possible to, for example, find your lost keys with the Tile app, meditate with the Headspace app, and create a travel plan shortcut that shows your reservation in the Kayak app anytime you say “travel plans.” 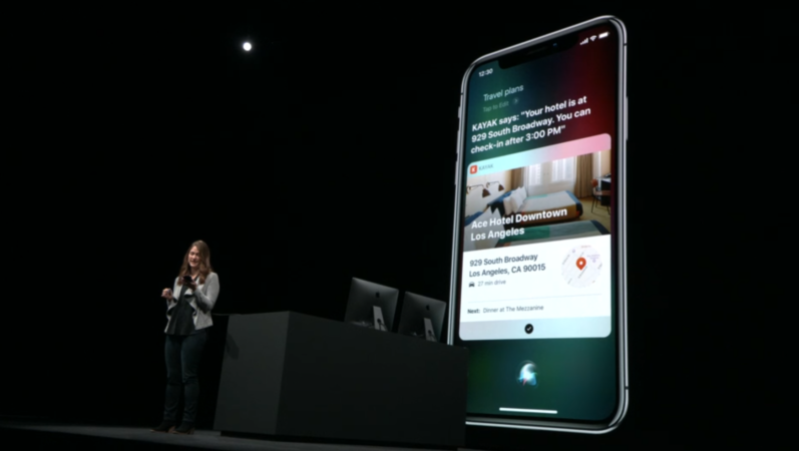 Above: Siri shortcut for travel plans with Kayak app

Siri Suggestions are also getting an enhancement in iOS 12 to recommend specific apps based on your past activity. If you typically visit Philz Coffee in the morning, for example, Siri may now suggest you get coffee from Philz and let you complete your purchases on the lock screen. Or if you use a specific app to track workouts a suggestion to launch the app might appear on your lock screen when it’s time to exercise.

The search area that appears when you swipe down on the home screen of an unlocked iPhone will also begin to surface recommendations based on knowledge of your schedule and habits. If you’re late for a meeting, Siri may suggest you call or send a message to the meeting organizer, or the assistant might activate Do Not Disturb mode when you enter a movie theater.

Users will be able to set up and manage Siri Shortcuts using the new app. The gallery portion of the app will feature pre-made shortcuts, while a drag-and-drop editor can be used for custom commands and shortcuts.

In the editor portion of the Shortcuts app, Siri can suggest actions to be completed in multiple-step shortcuts — like playing a podcast, sending a message, sharing a map for directions, or interacting with your favorite apps.

Until now, Apple hasn’t provided its users with a comprehensive way to view the different ways Siri can command or control third-party apps. The Shortcuts feature was made available today in developer preview as part of iOS 12, which will launch out of beta for the general public in the fall. 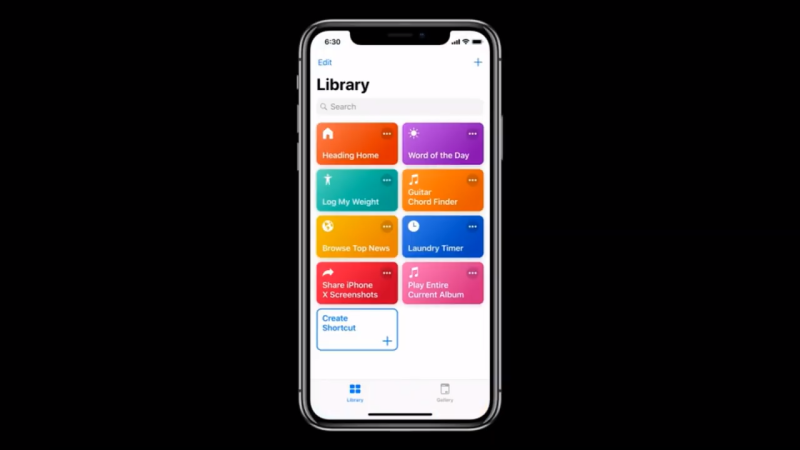 Above: Shortcuts app on iOS

Apple has limited the number of apps Siri can interact with since the assistant was first introduced for the iPhone in October 2011. For years, Siri was only able to connect with native iOS apps to do things like send messages and make phone calls. Then, in 2016, Apple introduced SiriKit.

SiriKit is the reason you see a set of apps show up when you search for “Siri” in the App Store, but SiriKit was never available to every iOS developer because it focuses on a specific set of actions or intents, like creating a to-do list, starting a workout, making a VoIP phone call, or searching for photos.

The introduction of custom intents and commands with Shortcuts gives both developers and users more control over their Siri experience on Apple devices and puts Siri back in the conversation with agents like Google Assistant and Alexa, which have introduced the same kinds of features in recent months.

Google, Amazon, and Apple have all now made the ability to create customizable commands that carry out multiple tasks with a single utterance a core feature of their conversational AI offerings.

With Shortcuts, Apple is following Google’s effort to bring its Android mobile app ecosystem and the Actions on Google platform for Google Assistant voice apps closer together. Thanks to deep links, Android users will be able to begin a conversation with a voice app and continue in an Android app.

For quick access to Alexa skills, Amazon introduced a new feature last week for recommendations from its ecosystem of more than 30,000 voice apps.

Siri has been criticized by many who believe the assistant, now 7 years old, hasn’t lived up to its potential. In March, Siri cofounder Norman Winarsky told Quartz that when Apple acquired Siri from SRI International, he believed the assistant would be used to personalize experiences. Instead, Siri has been hobbled for years by a lack of reliability and Apple’s overreaching ambitions and poor execution.

In the past, I’ve written that in order to be the most helpful assistant possible, Siri needs to do a much better job at accomplishing the top 20 things a person does everyday.

As was pointed out onstage today at McEnery Convention Center in San Jose, California, the App Store turns 10 next month, and as of this week Apple will have paid out $100 billion to developers. Empowering app developers to make richer experiences with the intelligent assistant opens the door to one of Apple’s biggest incumbent advantages: millions of iOS developers. The connection between mobile apps and the conversational user interface will be increasingly important for Apple and Google, makers of the world’s most-used mobile operating systems.

We will likely learn more about Shortcuts and their possible limitations in the days ahead. If the feature is anything like SiriKit, it may not successfully energize the iOS developer community, but if it works, it could give developers a new reason to care about Siri.