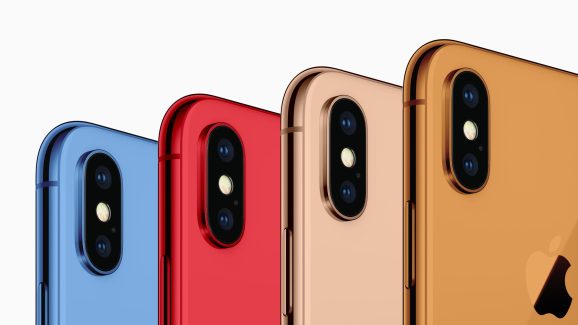 An artist's rendition shows how a glass-bodied iPhone might look in new colors.

Apple’s future iPhone plans appear to be coming into sharper focus based on two separate reports today: The company is said to be planning new colors for 2018’s iPhones, and it is expected to dump modem supplier Intel for future 5G iPhones.

According to TF International Securities’ well-sourced analyst Ming-Chi Kuo (via 9to5Mac), Apple is considering five colors for its upcoming iPhone 9: gray, white, blue, red, and orange. The 6.1-inch mid-range device is expected to include a full-front display with Face ID but also to use less expensive LCD technology and include a simpler rear camera.

Apple has historically used bright colors to pump up sales of mid-range iPhones and iPods. Blue last appeared with the inexpensive plastic iPhone 5c, but orange has never been used in an iPhone before, which might enhance the new device’s collectibility. The current-generation iPhone 8 ships in space gray, silver and white, and red versions that are likely similar to the other three colors on Kuo’s list.

Kuo also expects that the 6.5-inch iPhone 11 Plus — or whatever Apple calls the larger sequel to the iPhone X — will come in three colors: black, white, and gold. The iPhone X already ships in black and white versions, but prototypes of an unreleased pink-tinted “blush gold” model surfaced before and after the device’s release, hinting that another option would eventually hit the market.

A separate report from Israeli publication CTech suggests that Apple is — for now — ending its plan to work with Intel on 5G modems. The report claims that Apple has officially notified Intel that it will not use the “Sunny Peak” 5G modem in its upcoming devices, leading Intel to stop work on the chip and redirect personnel to other projects.

Sunny Peak apparently would have combined 5G, Wi-Fi, and Bluetooth into a single chip for use in upcoming iPhones, and Apple was expected to be its primary purchaser. CTech says that Intel executives blamed Apple’s decision on “many factors,” but specifically mentioned that integration of the up-and-coming 802.11ad (WiGig) Wi-Fi standard meant “new and unanticipated challenges” for designing “any mobile product.”

While 5G networks are nearing their late 2018 and early 2019 launches in the U.S. and elsewhere, there have recently been questions as to Intel’s ability to ship a 5G solution for smartphone-sized devices. Consequently, Apple has reportedly been in talks with MediaTek to supply 5G modems for future iPhones, in place of Intel, while Apple continues to fight with primary modem supplier Qualcomm over patent royalties. But given how few companies are making 5G modems, Apple may wind up working with Intel again — assuming it doesn’t produce its own 5G modem.

Updated July 6 at 7:30 a.m.: As noted in a followup story, Intel subsequently denied any changes to its 5G plans, and CTech updated its story to say that Sunny Peak is solely a Wi-Fi and Bluetooth chip, not a 5G modem.