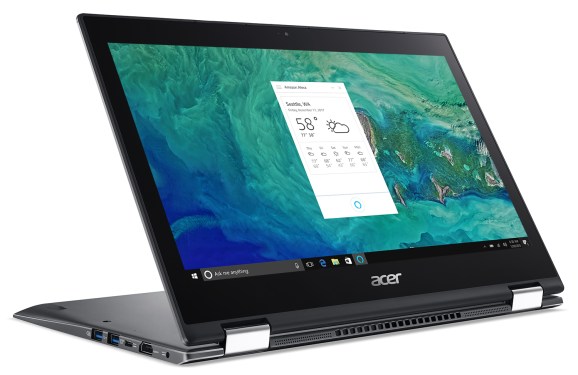 Whatever happened to the days of Alexa just being known as a black cylindrical speaker? Since the introduction of the first Echo in fall 2014, Amazon’s AI assistant has been embedded in a number of places, including car infotainment systems, Alexa smartphone apps, wireless headphones, Echo Show and Fire tablets, Fire TV Cube for TV control, the Echo Look with an AI-powered fashion assistant, and, in recent weeks, personal computers.

Select computers from HP, Acer, and others now make Alexa available to work seamlessly alongside Microsoft’s Cortana well ahead of the Alexa-Cortana partnership for Echo speakers and Windows 10 devices, a project that still has no launch date.

Among the many surfaces that can be used to talk to Alexa today, there are differences both glaring and subtle. Alexa in wireless earbuds, for example, cannot do things like set timers or send messages, and the Echo Show can display visuals when you ask a question.

Alexa in personal computers comes with a set of advantages — like the ability to talk with Alexa hands-free — and drawbacks.

Here’s a closer look at what Alexa can and cannot do on an Acer Spin 5, the first laptop with Alexa inside, made available in June.

What Alexa can do on a PC

Just like wireless earbuds or smart speakers, Alexa on a personal computer can control smart home devices. As of May, Amazon’s Alexa can control more than 12,000 devices from 2,000 manufacturers.

Alexa in the Acer Spin 5 is also able to speak with more than 40,000 Alexa skills to let you play games like Jeopardy! or the Spongebob Challenge, or hear bedtime stories.

And just like the AI assistant is able to do in other devices, Alexa on a PC can tell jokes, show personality, and search Wikipedia for answers to your factual questions about the world.

Alexa on Acer Spin 5 is also able to achieve the imperative task of being able to respond to hands-free voice commands, utilizing four microphones to pick up the sound of your voice from across the room.

Alexa on a PC can show your list of reminders and your shopping list, and that can be pretty handy — but you cannot edit the list with a tap on the screen or click of the mouse. Instead, any edits must be made in the Alexa app.

By contrast, with the Echo Show, you can scroll through your lists to remove to-do items or tap to edit an item on the list.

The limitations of visual cards

The most common thing people do every day with a smart speaker is check the weather. At launch, the Acer Spin 5 can provide five-day forecasts with high and low temperatures on a single visual card. 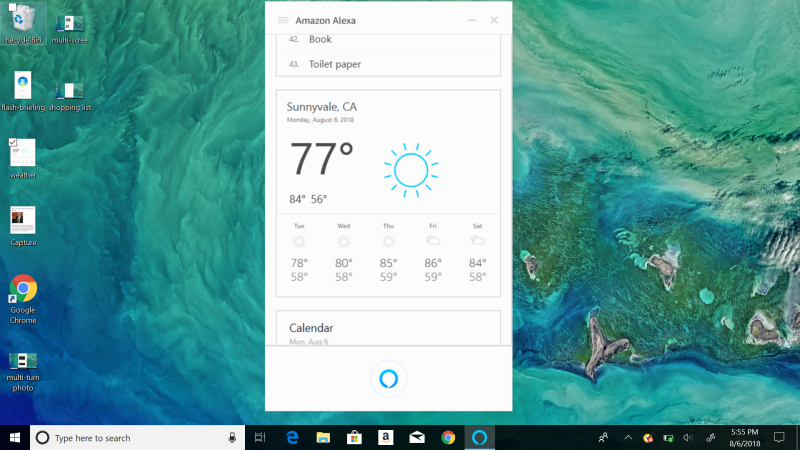 Another common thing done with an assistant is check the calendar. Here again the Spin 5 can provide results — but for a day, not a more extended period of time.

Ask “What’s on my calendar?” and you can see your next calendar event, but you can’t scroll through your schedule for the days and weeks ahead, as you can do with the Echo Show or Fire 10 tablets with Show Mode.

In general, visual cards on a device like Echo Show, or even the cards you can see when using an Alexa app on a smartphone, are much richer than those served up by Alexa on a PC.

This is in part due to the simpler, less illustrative user interface for Alexa on PC, but also because all the cards generated by Alexa and live in the stream are static. You are shown a stream of cards related to your activity, but you can’t go back and tap or re-engage with them. You have to ask the question again.

Other things you can do:

An Amazon spokesperson declined to discuss how Alexa on PCs may evolve over time or what future iterations might look like, but they said the AI assistant on personal computers was designed to ensure access to important productivity tools such as reminders, lists, calendars, and skills.

“At this time, there are some features that vary between Show Mode and Alexa on PCs like the ability to view videos,” the spokesperson told VentureBeat in an email.

This is interesting. Ask to order virtually anything and the PC assistant will read you each item’s title and give you options to buy, add to list, or scroll through a carousel of similar items to purchase. This is the only use case I came across that gives this sort of option. 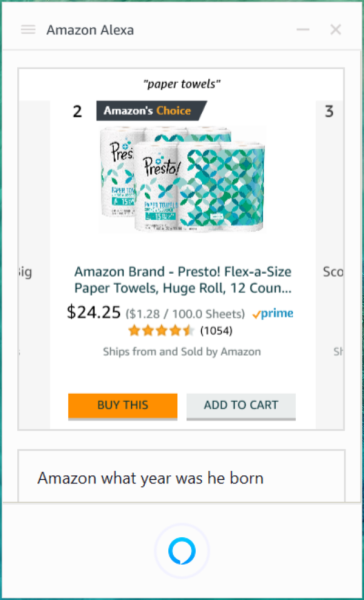 Speaking to Alexa may be different if you’re using a PC, smart speaker, earbuds, or Echo Look fashion assistant, but unlike variations with other features, it seems you can shop anywhere you can speak to Alexa.

Consumers’ willingness to shop with their voice may be in question today, but the wide availability of voice shopping comes as no surprise for a company whose purpose is to help people shop, especially amid the ecommerce battle ramping up now, with Amazon on one side and Google Assistant and retailers like Walmart and Home Depot on the other.

What Alexa cannot do on a PC

Alexa on a PC is unable to make a phone call or send a text message itself or through the Alexa app.

Alexa on an Acer Spin 5 can play music or news from Amazon Music, SiriusXM, and iHeart Radio, but not Spotify or Pandora. As Amazon continues to push its Music app to consumers, it’s probably no mistake that the two most popular music streaming services in the United States were excluded from Alexa on a PC.

You get a similarly limited experience with headphones and earbuds from the mobile accessories kit.

Once scarce among assistants from big tech companies, typing a command is now standard, available on Google Assistant and Siri on mobile devices and Cortana on Windows 10 PCs — but not Alexa.

The ability to type a command is important for moments when you want to complete an action but don’t want to say it out loud to get it done, such as when you’re in a meeting or you just want to maintain some privacy.

Alexa can serve up skills like most any other device connected with the AI assistant, but you can’t access visual Alexa skills on a computer yet to, for example, give you the iconic blue screen when playing Jeopardy! as you can when you play on an Echo Show. Alexa on PC is also unable to launch PC apps, so don’t expect to open apps or games like you can with Cortana.

Act as a home intercom

Alexa on a PC is also unable to make announcements to Echo speakers. Announcements are one-way voice messages you can send to Echo devices in your home to tell everyone dinner is ready or encourage your kid to get ready for school. The purpose of announcements is to act similar to a home intercom.

The genius of conversational computing is that it removes the need to learn how to use a graphic user interface to carry out computing tasks. Instead of navigation, you just talk.

To make this practical, however, requires giving people a way to go back to what they were doing earlier, because in the real world people tend to get interrupted or distracted.

Should you listen to a song with Spin 5 and press pause, for 10 to 15 seconds it’ll show the music at the bottom of the app window, but after a while it disappears and you’re left with no way to return to that paused song. 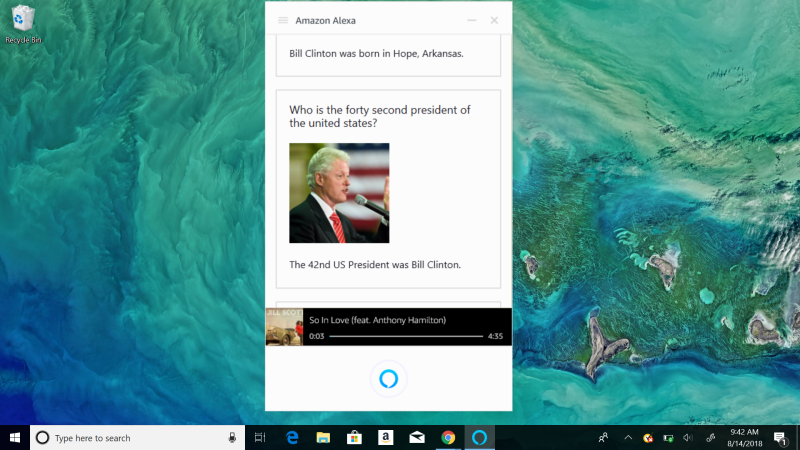 Alexa on a PC gives you a vertical interface of cards you can peruse but no way to return to shopping, or adding an event to your calendar, or anything else you were doing. You just have to start over.

This same problem is encountered with Echo Show and Google Assistant on the visual Lenovo Smart Display. In each instance, you can begin a journey of sorts with voice, start down a road to complete a task, but lose your place if you get distracted by other duties.

Unmentioned for the most part thus far is how Cortana compares to Alexa on a PC because there’s no real comparison to make. Cortana on a PC is still miles ahead. Without the need to unlock the device, Cortana can go full-screen, show you your reminders and your calendar, answer factual questions, or begin image or video searches.

This takes full advantage of the Acer Spin 5’s screen and ability to fold in an A-shape for a touch display experience, and things get even more impressive if you begin to use a Cortana-enabled speaker like the Harman Kardon Invoke. 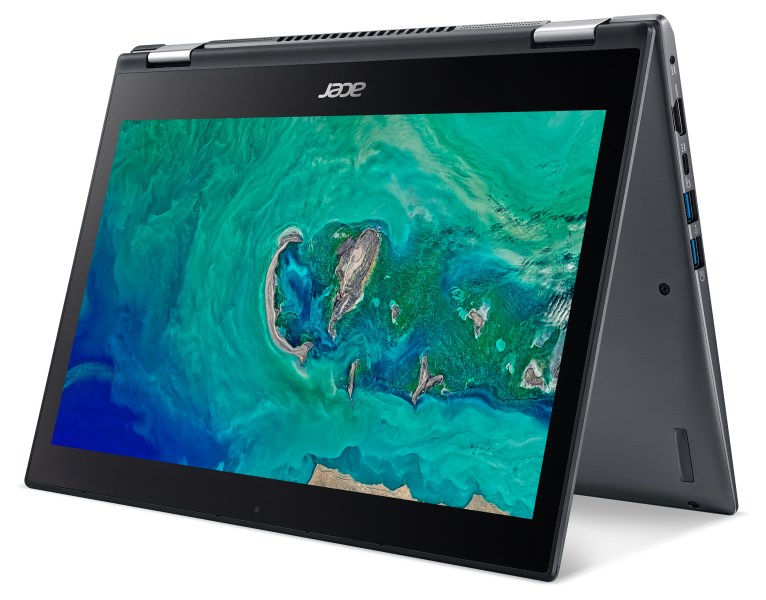 Visual experiences with assistants like Cortana and Alexa and changing fast, but with Alexa on a PC today there’s no Tap to Alexa or Show Mode for better a visual experience; few advanced assistant features; and a painfully simple user interface that can’t take advantage of the full screen.

In a word, the first iteration of Alexa in a PC is basic.

If you’re mainly interested in the most common Alexa use cases — to answer questions, control smart home devices, shuffle Beastie Boys songs, and get the weather — then you might like the Spin 5. But if you’re looking to buy this computer because you’re already part of the Alexa world and want an Alexa experience in a visual environment or full control of your computer, the Acer Spin 5 will be disappointing to you.

However, the Acer Spin 5 is a versatile 13.3-inch notebook with an HD touch display worth checking out on its own merits, especially if you like Cortana and are willing to wait for Alexa to get better.