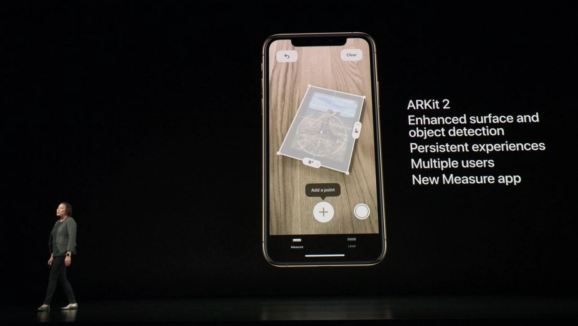 Apple’s investing heavily in artificial intelligence (AI). That much was clear from today’s iPhone and Apple Watch unveiling in Cupertino, California.

The new iPhone Xs and iPhone Xs Max boast the A12 Bionic, a 7-nanometer chip that Apple characterized as its “most powerful ever.” It packs six cores (two performance cores and four high-power cores), a four-core GPU, and a neural engine — an eight-core dedicated machine learning processor, up from a two-core processor in the A11 — that can perform five trillion operations per second (compared to 500 billion for the last-gen neural engine). Also in tow is a smart compute system that automatically determines whether to run algorithms on the processor, GPU, neural engine, or a combination of all three.

Apps created with Core ML 2, Apple’s machine learning framework, can crunch numbers up to nine times faster on the A12 Bionic silicon with one-tenth of the power. Those apps launch up to 30 percent faster, too, thanks to algorithms that learn your usage habits over time.

The news follows on the heels of Apple’s Core ML 2 announcement this summer.

News of Core ML’s update came hot on the heels of ML Kit, a machine learning software development kit for Android and iOS that Google announced at its I/O 2018 developer conference in May. In December 2017, Google released a tool that converts AI models produced using TensorFlow Lite, its machine learning framework, into a file type compatible with Apple’s Core ML.

In a hint at the company’s ambitions, Apple hired John Giannandrea, a former Google engineer who oversaw the implementation of AI-powered features in Gmail, Google Search, and the Google Assistant, to head up its machine learning and AI strategy. And it is looking to hire more than 150 people to staff its Siri team.