It’s the first day of Microsoft’s Ignite conference in Orlando, Florida, and the Seattle company has already made a slew of announcements. It launched a $40 million AI for Humanitarian Action initiative, introduced an Azure service to automatically build AI models, and debuted the Cortana Skills Kit, Surface Hub 2S and Surface Hub 2X, and AI-powered suggestions in Microsoft 365. Also on deck this morning? Microsoft Office 2019.

Starting today, Microsoft Office 2019 for Windows 10 and macOS — the direct successor to Office 2016 — is broadly available for volume licensed customers, with additional SKUs to come in the next few weeks. (Project, Visio, Access, and Publisher will only be available for Windows.)  The newest versions of Word, Excel, PowerPoint, Outlook, and more include a number of enhancements that have been added to Office 365 over the past three years, said Jared Spataro, corporate vice president for Office and Windows Marketing. But unlike Office 365, they won’t receive future feature upgrades.

Among the many improvements is a Morph and Zoom effect in PowerPoint that enables users to create “cinematic presentations,” plus new data analysis tools in Excel, new formulas in PowerPivot, and improved inking features like pencil case, pressure sensitivity, and tilt effects. That’s just the tip of the iceberg, of course — Word 2019 and Outlook 2019 boast Focus Mode, which blocks out distractions, and Focused Inbox, which automatically highlights important emails. And the list goes on. 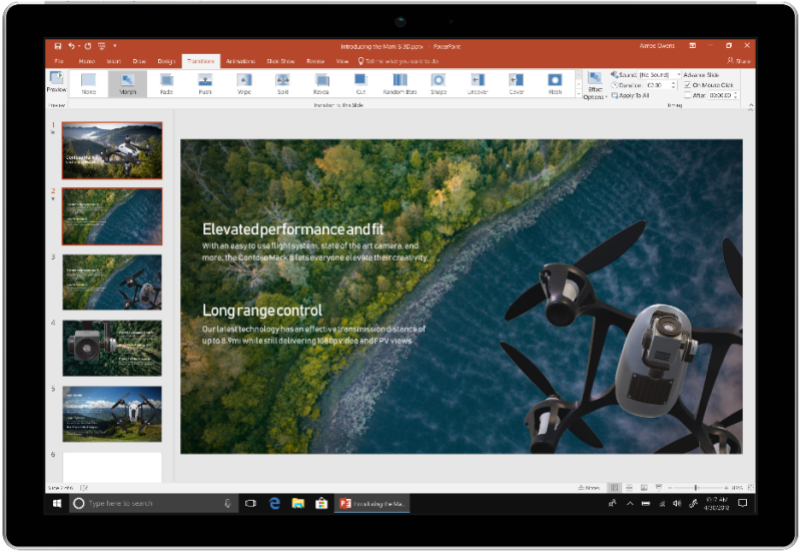 On the IT side of the equation, Office 2019 sees updates to usability, voice, and security, and taps Microsoft’s Click-to-Run (C2R) deployment solution for monthly security updates, app installs, and reduced network consumption through Windows 10’s download optimization tech. Also in tow is support for in-place upgrades for customers upgrading from older Office products.

“Office 2019 is a valuable update for customers who aren’t yet ready for the cloud,” Spataro wrote in a blog post. “While the cloud offers real benefits in productivity, security, and total cost of ownership, we recognize that each customer is at a different point in their adoption of cloud services … Each time we release a new on-premises version of Office, customers ask us if this will be our last. We’re pleased to confirm that we’re committed to another on-premises release in the future.”

If an upgrade isn’t in your organization’s cards at the moment, don’t fret — Microsoft recently extended support for Office 2016 and Office 365 backend services to October 2023, with an optional two additional years of paid support. Office 365 ProPlus on Windows 8.1 and older operating systems, meanwhile, will be supported through January 2023.