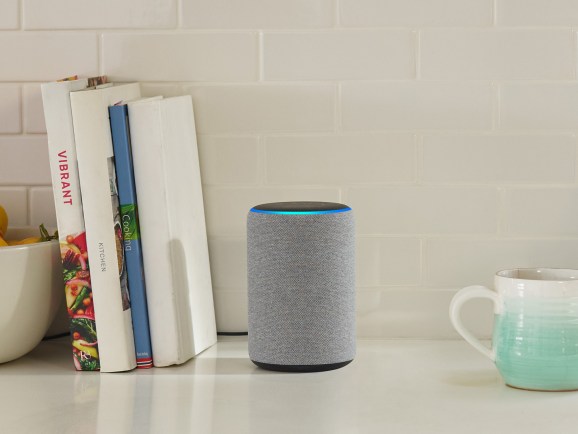 They’re available in the U.S. as part of Amazon’s Smart Home Skill API, with support for additional regions on the way.

The Doorbell Event Source API can play announcements on all Echo devices. (As Amazon notes in its documentation, Alexa already uses doorbell events for announcements mobile notifications and routines.) As for the Motion Sensor interface, which is equally self-explanatory, it reports the state of an endpoint (e.g., a security camera) that senses movement in a given area.

Some of the use cases Amazon suggests are connected bulbs that light up when someone rings the doorbell, cameras that trigger voice announcements, and smart speakers that play music when a sensor detects motion. In addition to those and other automations, skills that use the new APIs allow Echo device owners to set custom announcements using Routines — sequences of tasks tied to a single command — in the Alexa app for iOS and Android.

Alongside Doorbell Event Source and Motion Sensor, Amazon released a new Alexa.RTCSessionController API that enables smart cameras and doorbells to establish a two-way link with smart displays like the Echo Show and Echo Spot. Devices from Ring, which Amazon acquired for more than $1.2 billion in February, have already implemented the API in its products, and Amazon says that smart locks from August will follow suit. (Both Ring and August support Doorbell Event Source and Motion Sensor.)

Not every smart camera will be able to take advantage of the full capabilities afforded by Alexa.RTCSessionController. Amazon notes that only WebRTC-compliant cameras or 3Ps that use a WebRTC bridge to connect to Alexa are supported, and that half-duplex cameras can’t process Alexa voice commands; they will have push-to-talk capabilities on the Echo Show and Echo Spot, however.

The new Alexa APIs come days after the debut of hands-free room booking capabilities with Alexa for Business, which allow Echo, Echo Dot, and Echo Plus users to reserve conference rooms (or check occupancy) with their voice. Earlier this month, Amazon launched skill connections for Alexa apps, letting developers tap into features provided by other Alexa apps, services, and platforms. And in May, Amazon rolled out a feature that enables Alexa to suggest voice apps by goal or feature instead of name (e.g., “Alexa, I need a ride” or “Alexa, help me cook dinner”).

More improvements are on the way. At an event in Seattle last month, Amazon announced a host of upcoming Alexa features, including new music release notifications, routines for kids, and enhanced video controls for Alexa devices with screens (like the Echo Show).