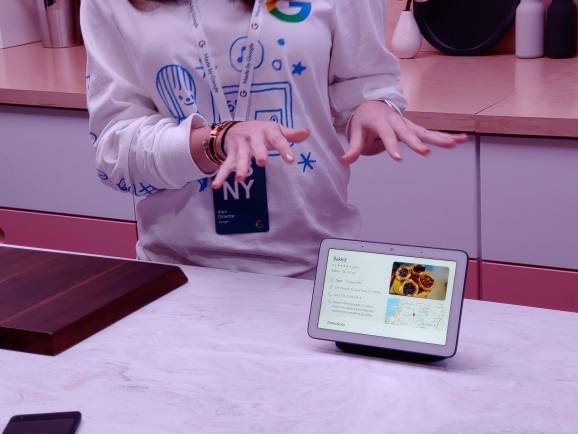 Google unveiled the Home Hub, a device that delivers visual interaction with Google Assistant, on Tuesday.

A lot of what we know about the Home Hub was leaked beforehand. The same can be said for the Pixel 3, Pixel Stand, and the Pixel Slate. What’s baffling — and what might be the biggest surprise of everything that came out of Google’s most important hardware event of the year — was the fact that the Home Hub has no camera.

This goes against what’s become standard for the new smart display category of devices. Amazon’s Echo Show, Facebook’s Portal and Portal+ (which came out earlier this week), and smart displays from JBL and Lenovo that speak with Google Assistant all have cameras.

Portal+ even makes the camera its main selling point by delivering AI-powered enhancements for Facebook Messenger video calls to ensure people are always in frame and sound is always crisp.

Portal devices also invite developers to create in-call experiences in augmented reality and let users do things like listen to Spotify music together.

Amazon’s Echo Show is upping its video call game by deepening its partnership with Microsoft and adding support for Skype, an app with hundreds of millions of monthly active users.

But Google’s apparently going in another direction, at least with the Home Hub. On Tuesday, the company said the decision was about privacy.

“We consciously did not put a camera on Hub so that it was comfortable to use in the private spaces of your home, like your bedroom,” Google VP Diya Jolly said onstage earlier this week.

People do care a lot about privacy and trust, and no camera means one less thing to worry about after the Google+ shutdown, but this explanation seems a bit disingenuous, or at least not the full story.

Google is the maker of Clips, a camera for taking pictures all around your home. The company also makes the Pixel Stand, and during its rollout on Tuesday, Google emphasized in advertisements and in features that the Pixel Stand is best placed next to your bed, with an alarm that shares soft glowing light in the morning and routines to help you fall asleep at night.

All of these devices offer the same things: They want to help you set timers, control your smart home, listen to music, buy things, and communicate by sending messages or calling your friends and family.

So it’s really confusing why Google decided to leave the camera out of the Home Hub.

Perhaps Google has stopped trying to win in the video chat business.

Duo, the app through which Lenovo Smart Display and JBL Link View make video calls, hasn’t seen an immense amount of adoption since it emerged in 2016, likely far less than its competitors. If Duo had hundreds of millions of users (compared to Messenger’s 1.3 billion MAUs), we’d probably all know about it because Google would have told us.

So maybe it isn’t to Google’s advantage to make the visual smart speaker game into a video call competition, but not including a camera at all seems to unnecessarily cede this ground.

Perhaps the lack of a camera in the Home Hub is about price. The Home Hub, at $149, is only $20 more than the original Home speaker that came out two years ago. It also undercuts all of its competitors, with the Echo Show at $229, Portal for $199, and Portal+ at a whopping $349.

Virtually nothing matters more than price when consumers are shopping for smart speakers — and everything else :-) — but the Lenovo JBL Link View is only $50 more and comes with video and a larger screen, to say nothing of sound quality.

In my experience, and I think that of a lot of other people today, the weekly or bi-weekly check-in via video call with loved ones is a common occurrence, practically a way of life, and a dedicated device that can avoid some of the lag I get on my computer or frustration from fumbling with my phone would be welcome. But it’s not entirely clear price is the real reason for the lack of a camera.

No camera on the Home Hub also means you don’t get Google Lens, the computer vision service Google currently extends to Android smartphone users through the Assistant.

Lens is not available on JBL or Lenovo smart displays, but rolling it out for things like Style Match, a service for finding similar fashion styles, could have been a popular use case, and the extension of Lens could serve Google well as Facebook creates more in-call experiences and Amazon ships devices like the Echo Look for fashion advice.

Another possible explanation for the lack of camera in the Home Hub is the Pixel Stand. It’s $79 but, at 6.3 inches, the Pixel 3 XL is nearly equal in size to the 7-inch screen of the Home Hub. Of course, you don’t get the speakers with more volume or the same user interface, but you do get Google Assistant interaction, smart home control, and a lot of things that come with Home Hub.

How the large companies that are deploying AI assistants in homes, cars, and the workplace define success can differ depending on their business strategy.

And unlike Amazon or Facebook, Google owns the Android operating system, with its 2 billion users around the world.

The essential statistic to remember is that — among all of these features being added to assistants and partnerships with major brands and all the noise that fills the space occupied by some of the biggest consumer tech companies on the planet — even though Google Assistant use on Home devices is up by a factor of five in the past year, the smartphone is still the No. 1 place for people to have interactions with an AI assistant.

That’s why Google took the major step Thursday of making Google Assistant available to answer some questions from Android lock screens about your latest emails or next event on your schedule.

With a lead in the global smart speaker market, perhaps Google felt the prudent thing to do was to draw more people in through its flagship phone to get them comfortable with having an AI assistant in their lives, similar to the introduction that happens with an Echo Dot or Home Mini.

So which combination of factors explains exactly why Google chose to make the Home Hub without a camera? That’s a mystery we may never solve. There are an awful lot of reasons why it could have made sense for Google to include a camera, but the full explanation for not doing so probably feeds into the larger business strategy for Google Assistant’s proliferation through speakers, tablets, Chromebooks, smart displays, car infotainment systems, and, most important of all, the Android operating system.