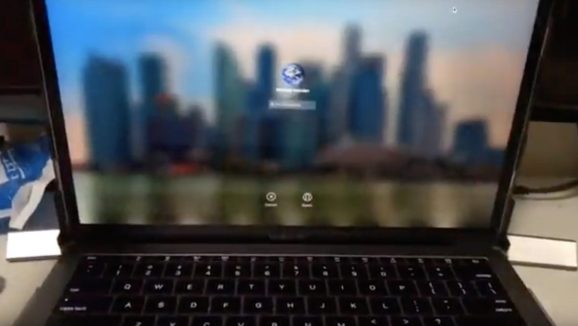 Apple’s premium MacBook Pro laptops spent 2018 clouded by keyboard and processor performance issues, so a newly surfaced problem isn’t so much surprising as disappointing. Fragile display cables can fracture after normal use, leading first to the appearance of “stage lights” at the bottom of the screen and then to a complete failure of the backlighting system.

According to repair house iFixit and a “Flexgate” website spotlighting the issue, the problem is the result of Apple’s use and placement of thin display cables that wear down every time the laptop is opened and closed. At first, the cables appear to be fine, but over the normal lifespan of the computer, they fray. As the cables fail, the screen’s backlighting will first resemble a collection of upward-pointing lights, then turn off entirely when the screen opens beyond a 40-degree angle.

Normally, the cables would be separate and easily replaceable $6 parts, but Apple permanently attached them to the MacBook Pro’s LCD screen and quotes users a $600 fee to replace the entire display. iFixit claims that the cable failure is simply a matter of “when (not if)” for recent MacBook Pro purchasers, yet Apple is said to be largely — though not entirely — rejecting users’ attempts to get the defective cables replaced at no charge. The company is also allegedly deleting threads about the problem on its discussion forums.

It’s unclear whether the problem will extend to the recently redesigned Retina MacBook Air, which iFixit notes uses a similar but not identical permanently tethered cable and LCD screen design. For the time being, the issue is believed to affect all 2016-2018 MacBook Pros, including 13-inch and 15-inch Touch Bar models, as well as 13-inch non-Touch Bar models.

Flexgate site creator Alex P. has launched a Change.org petition to get Apple to acknowledge the issue, requesting an extended warranty program to fix the problem for free, as well as refunds for users who already paid to repair their laptops. As of press time, the petition has over 2,200 signatures, and the number’s climbing rapidly.

Apple ultimately addressed prior MacBook Pro keyboard complaints with a repair program and issued a software update to remedy processor throttling issues. The company has not yet commented on the display problems.