Google announced a milestone in its bid to control the world’s internet infrastructure as its first privately funded intercontinental subsea cable touched down in Chile yesterday.

The technology titan first revealed the Curie project last January, alongside two other new cables, while touting itself as the “first major non-telecom company” to build a private international cable.

Here, we take a look at all of the underwater cable projects Google has invested in, either in partnership or on its own.

Curie runs 10,000km from Los Angeles, California all the way down the Pacific coast to Valparaíso, some 120km northwest of Chile’s capital, Santiago. 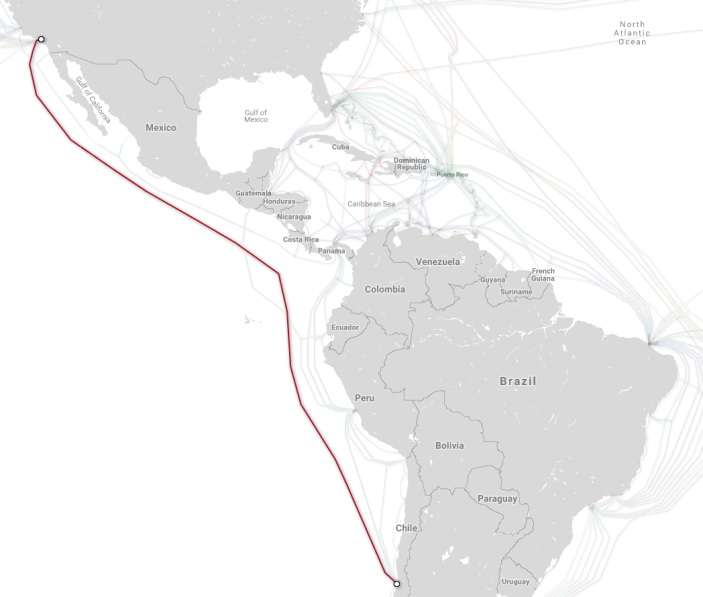 Above: The Google-funded Curie cable.

Though Curie represents the first fully Google-owned international subsea cable to be completed, it is actually one of 13 the company has invested in over the past decade.

Stretching 9,620km from Chikura, Japan all the way to Redondo Beach, California, Unity is co-owned by a number of well-known companies, including Google, Telstra, Singtel, KDDI, Airtel (Bharti), and Time.com. 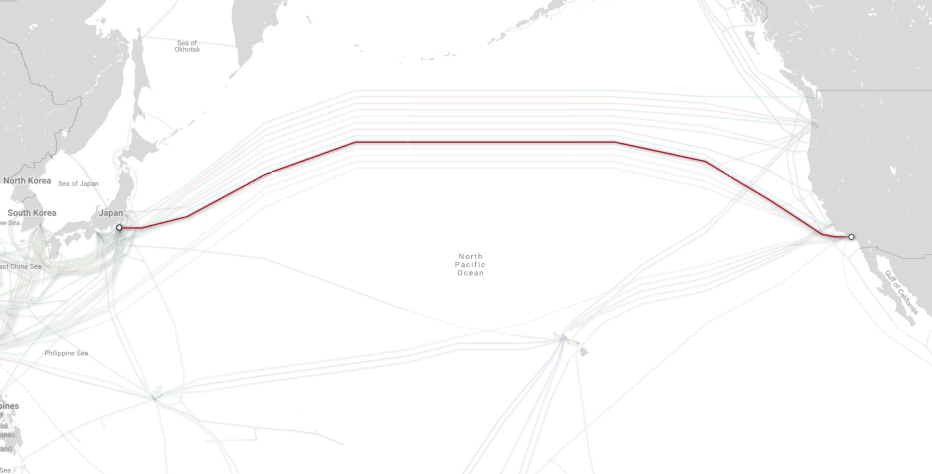 Above: The Unity cable, which went into operation in 2010. 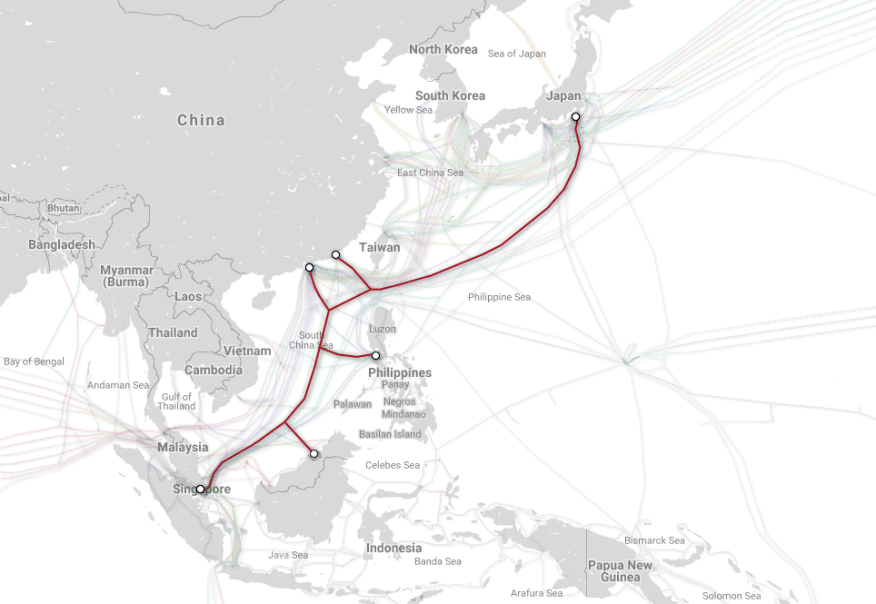 Above: The SJC cable, which went into operation in 2013.

An extension to this cable, dubbed SJC 2, is currently under development and is expected to be ready for service by 2021. Google isn’t investing in SJC 2, but Facebook is.

Faster went into service in 2016 and stretches 11,629km from Bandon, Oregon (U.S.) to Tanshui, Taiwan, with an additional two landing points in Chikura and Shima, both in Japan. 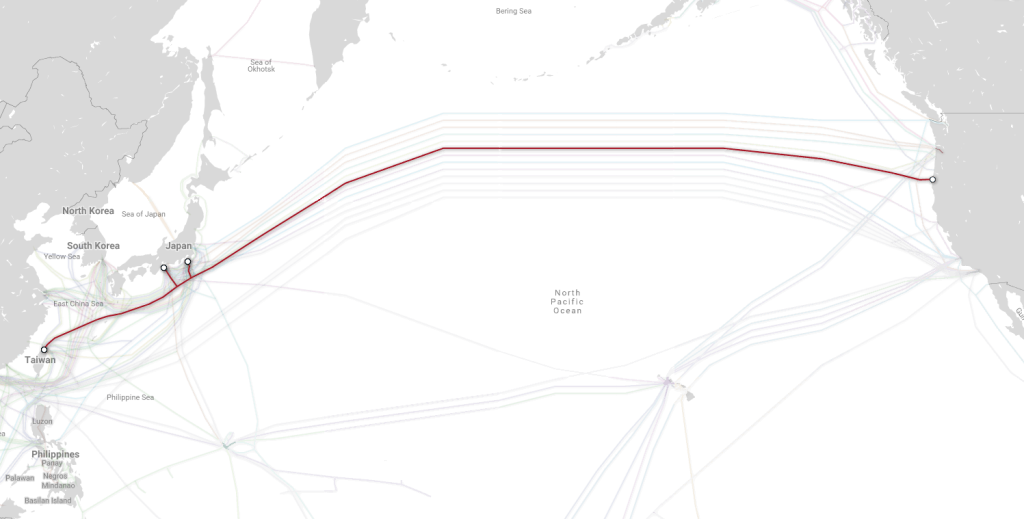 Above: The Faster cable, which went into operation in 2016.

Reaching 10,556km from the U.S. to Brazil, Monet went into operation in 2017 with three landing points: Boca Raton, Florida and Fortaleza and Santos in Brazil. 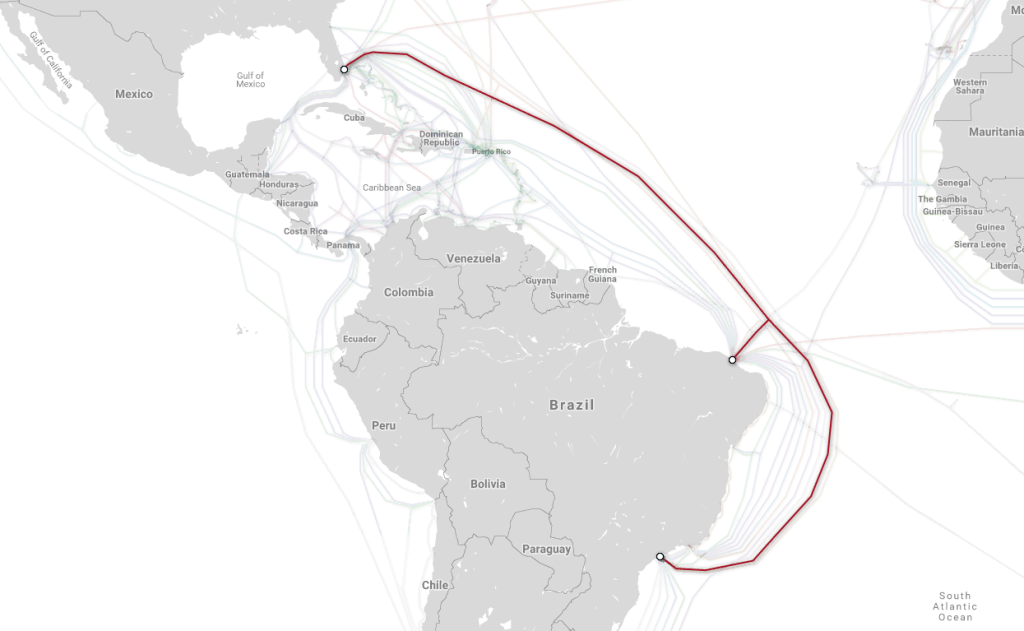 Above: The Monet cable, which went into operation in 2017.

Running 390km from Rio de Janeiro to Santos, Junior was technically Google’s first fully owned subsea cable, but given that it runs to and from Brazil, it’s not “international” — which gives Curie’s completion this week a unique distinction. 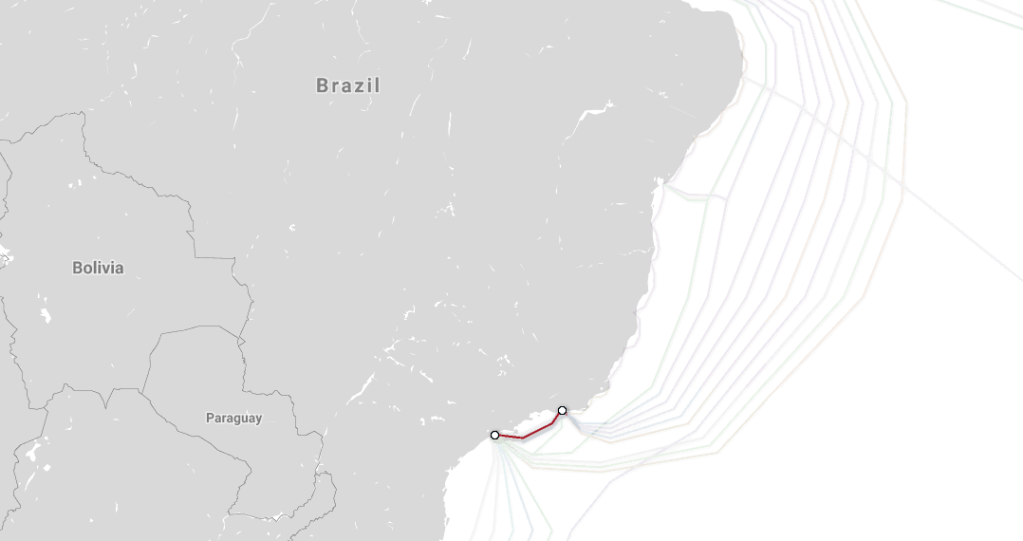 Above: The Junior cable, which went into operation in 2018. 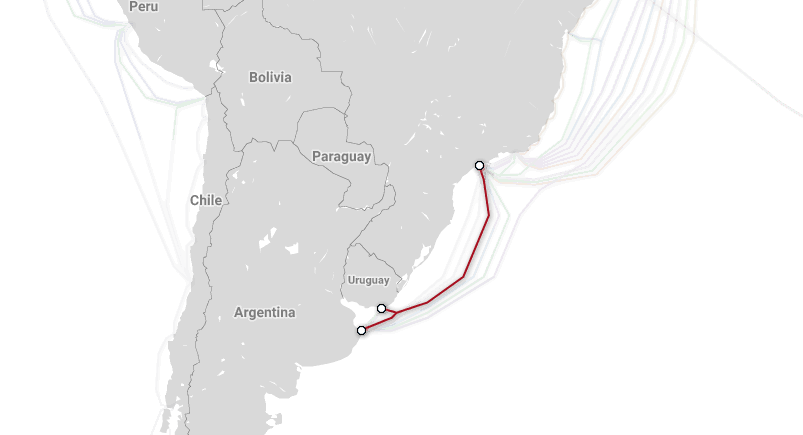 Above: The Tannat cable, which went into operation in 2018.

The Tannat cable is co-owned by Google and Antel Uruguay and has been operational since 2018.

Facebook and Google haven’t always been the best of friends, but the companies have a mutual interest in solid internet infrastructure, which is why they teamed up in 2016 to build the Pacific Light Cable Network (PLCN) cable, with landing points in Deep Water Bay, Hong Kong; Aurora, Philippines; San Fernando City, Philippines; Toucheng, Taiwan; and El Segundo, California.

Above: The PLCN cable, which will be operational in 2019.

The PLCN cable is co-owned by Google, Facebook, and Pacific Light Data Communication Co. Ltd., which is a subsidiary of China Soft Power Technology Holdings. The cable is expected to be completed by Q3, 2019.

At 12,971km, the PLCN cable is the longest single cable infrastructure project Google has invested in to date.

The Indigo cable project, announced back in 2017, constitutes two segments — Indigo-Central, which runs 4,850km from Perth to Sydney in Australia, and Indigo-West, which is 4,600km long and claims landing points in Jakarta, Indonesia; Tuas, Singapore; and Perth, Australia. 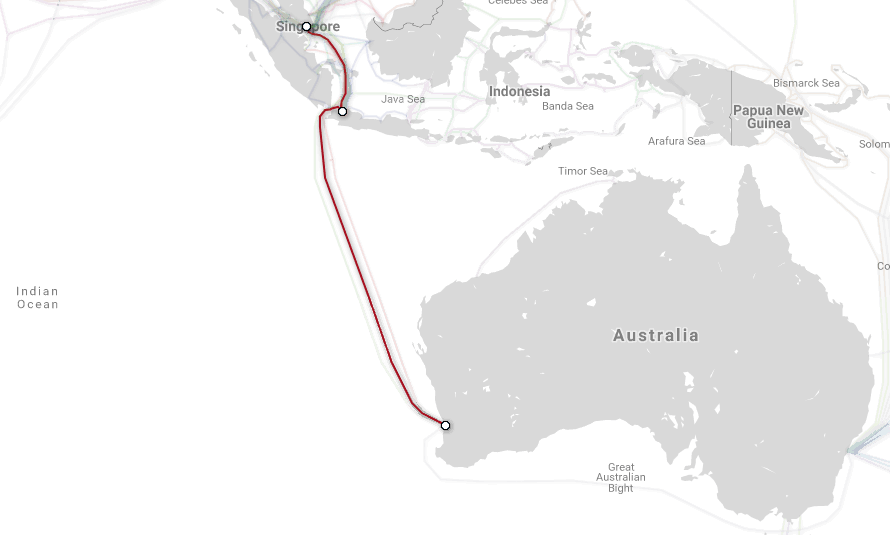 Above: The Indigo-West cable, which was completed in late 2018.

Indigo-Central is co-owned by the same companies as Indigo-West, minus Telstra’s participation. 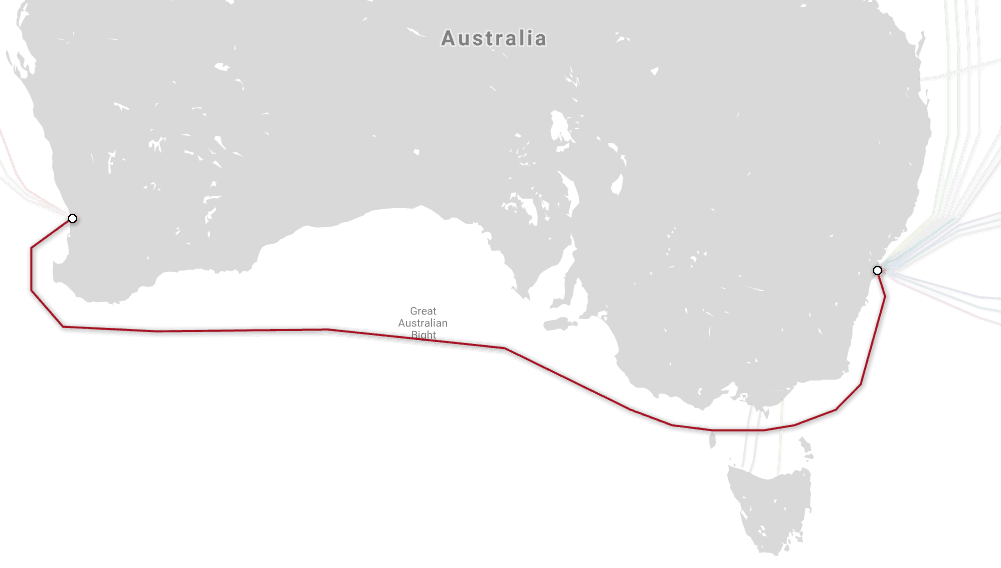 Above: The Indigo-Central cable, which was completed in late 2018.

Both segments of the Indigo subsea cable network were completed in late 2018 and are expected to go into operation later this year. 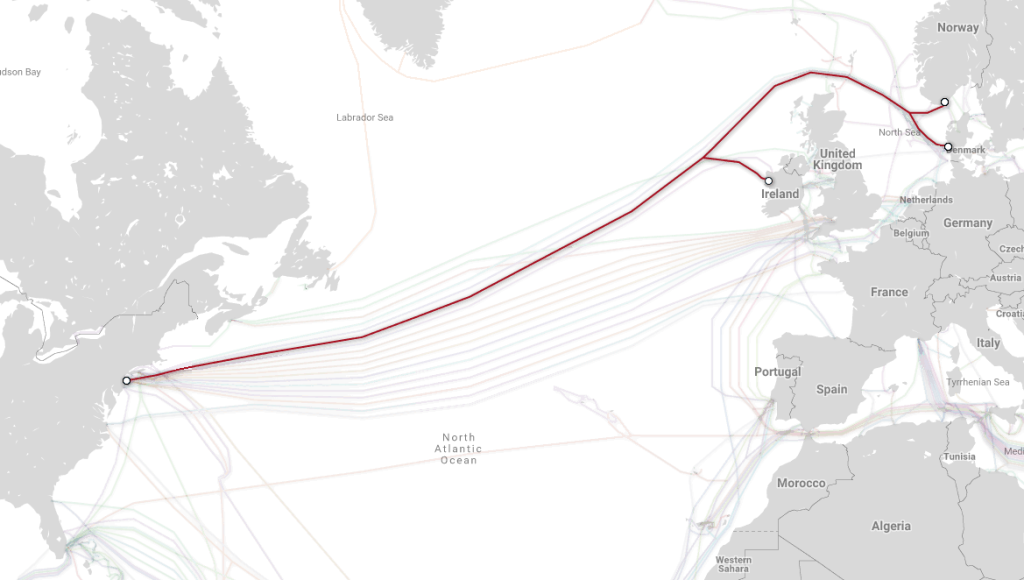 Above: The Havfrue/AEC-2 cable is expected to be complete and in service by the end of 2019.

The Havfrue/AEC-2 cable is the second subsea project Google has partnered with Facebook on, and investors include Aqua Comms and Bulk Infrastructure. The cable is expected to be complete and in service by the end of 2019.

Announced last April, the Japan-Guam-Australia South (JGA-S) cable will run 6,200km from Piti, Guam to Australia — with landing points in Maroochydore and Sydney. 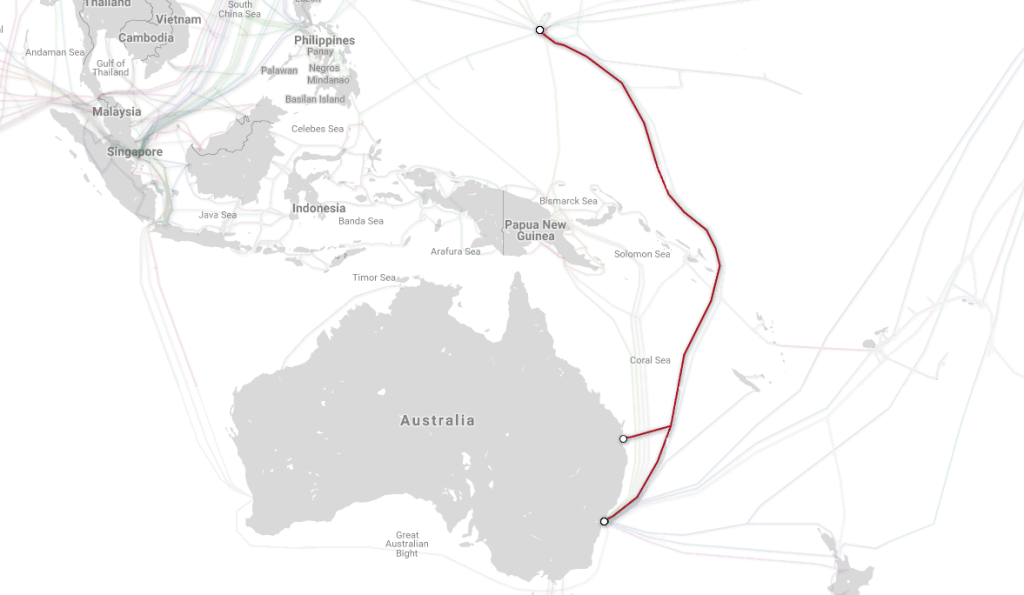 Above: The JGA-S cable is expected to be complete and in service by the end of 2019.

An additional 3,100km segment, dubbed Japan-Guam-Australia North (JGA-N), stretches from Guam to Japan but is solely owned by RTI. Both segments are expected to be completed by the end of 2019.

Co-owned by Google and RTI, the Hong Kong-Guam (HK-G) cable will have landing points in Piti, Guam and Tseung Kwan O, Hong Kong. Construction began back in 2018. 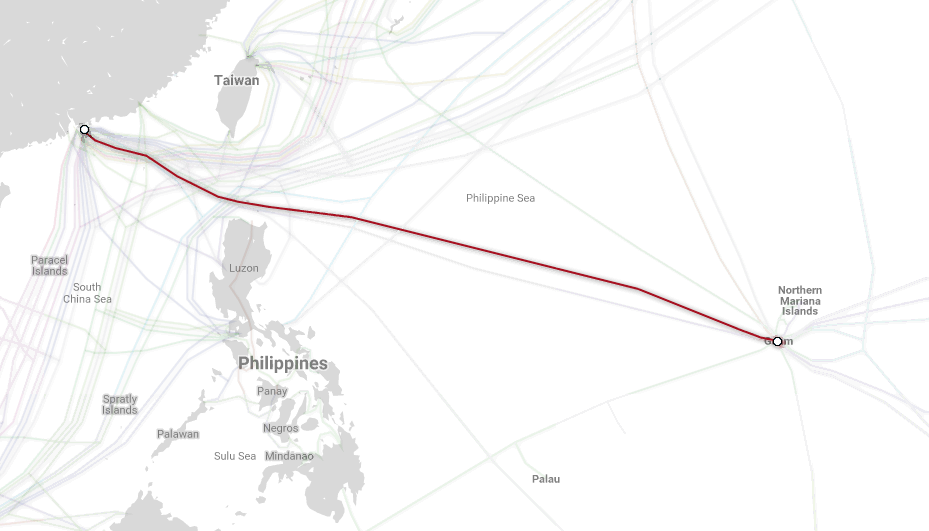 Above: The HK-G cable is expected to be operational by 2020.

Stretching 3,900km across the Philippine Sea, the HK-G cable is expected to be fully installed and operational by 2020. 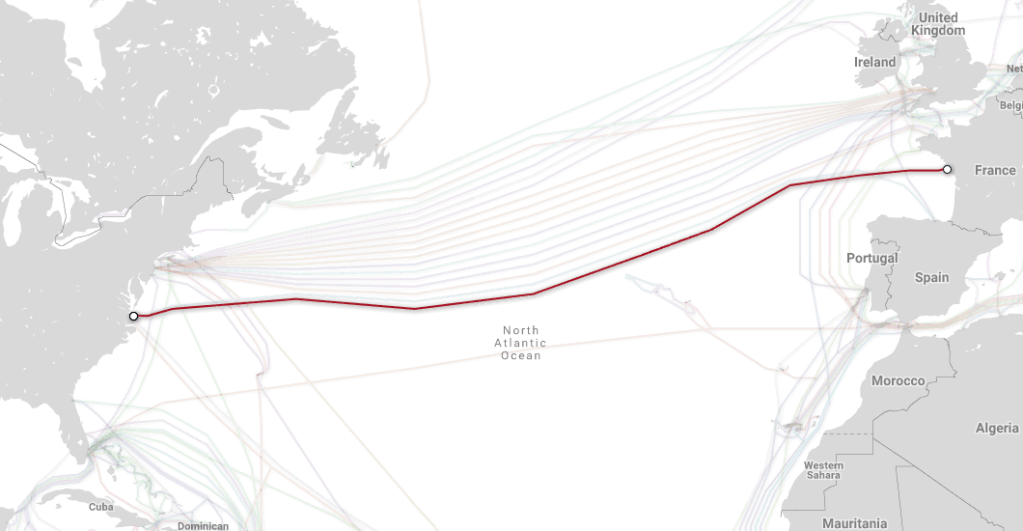 Above: The Dunant cable is expected to be complete in late 2020.

The Dunant cable project is expected to be up and running in late 2020.

What all this means

Google’s increasing investment in submarine cables fits into a broader trend of major technology companies investing in the infrastructure their services rely on.

Besides all the datacenters Amazon, Microsoft, and Google are investing in as part of their respective cloud services, we’ve seen Google plow cash into countless side projects, such as broadband infrastrucure in Africa and public Wi-Fi hotspots across Asia.

Elsewhere, Facebook — while not in the cloud services business itself — requires omnipresent internet connectivity to ensure access for its billions of users. The social network behemoth is also investing in numerous satellite internet projects and had worked on an autonomous solar-powered drone project that was later canned. Earlier this year, Facebook revealed it was working with Viasat to deploy high-speed satellite-powered internet in rural areas of Mexico.

While satellites will likely play a pivotal role in powering internet in the future — particularly in hard-to-reach places — physical cables laid across ocean floors are capable of far more capacity and lower latency. This is vital for Facebook, as it continues to embrace live video and virtual reality. In addition to its subsea investments with Google, Facebook has also partnered with Microsoft for a 4,000-mile transatlantic internet cable, with Amazon and SoftBank for a 14,000 km transpacific cable connecting Asia with North America, and on myriad other cable investments around the world.

Needless to say, Google’s services — ranging from cloud computing and video-streaming to email and countless enterprise offerings — also depend on reliable infrastructure, for which subsea cables are key.

Curie’s completion this week represents not only a landmark moment for Google, but for the internet as a whole. There are currently more than 400 undersea cables in service around the world, constituting 1.1 million kilometers (700,000 miles). Google is now directly invested in around 100,000 kilometers of these cables (62,000 miles), which equates to nearly 10% of all subsea cables globally.

The full implications of “big tech” owning the internet’s backbone have yet to be realized, but as evidenced by their investments over the past few years, these companies’ grasp will only tighten going forward.