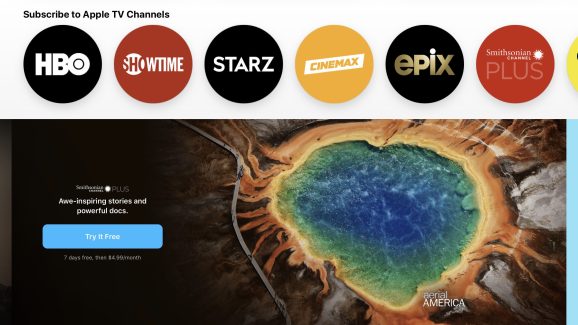 One and a half months after its beta debut, Apple’s iOS 12.3 update is officially arriving in final form today for iPhones, iPads, and iPod touches, alongside tvOS 12.3 for Apple TVs. Both releases focus largely on TV-related enhancements, including the addition of support for third-party televisions with AirPlay 2 capabilities, integrated subscriptions to “Channel” apps, and an overhauled TV app. According to Apple, the overhauled TV app will be available in over 100 countries today.

Originally announced at the 2019 CES in January, Apple’s support for third-party “smart TVs” enables select 2018 and 2019 models from Samsung, LG, Vizio, and Sony to stream video and audio content from iOS devices using AirPlay 2; Apple subsequently announced deals with Roku and Amazon for their TV products. Since this feature depends on the TV makers to add support via firmware updates and/or apps, it will roll out at different times for different manufacturers; Samsung’s 2019 smart TV sets and certain 2018 models officially get AirPlay 2 support today, while the others are coming “later this year.”

Apple TV Channels was announced in March at Apple’s It’s Show Time event, and enables users of Apple’s TV application to expand its video offering by subscribing to individual “channels.” In the initial iOS 12.3 beta, U.S. customers were able to sample four initial channels — Showtime, The Smithsonian Channel, Starz, and Tastemade — beginning with one-week free trials and continuing as $5 to $11 monthly subscriptions. Additional channels were added in subsequent betas, and final pricing for each channel is likely to become apparent over the next day.

In addition to adding Channels, Apple also updated its TV apps for both iOS 12.3 and tvOS 12.3 to more tightly integrate with the iTunes Store, allowing direct purchases and rentals of movies and TV shows without exiting the TV app itself. The app now separately breaks out movies, TV shows, sports, and kids’ content at the top of the screen, while providing access to Watch Now recommendations and your existing iTunes library either at the bottom of the screen (iOS) or top (tvOS). Apple says that its TV app now integrates content from over 150 video apps, including individual channels from across the world.

Beyond AirPlay 2 support, Samsung confirmed that its 2019 smart TVs and select models are also getting the updated Apple TV app today. Macs will be able to run the new TV app in the fall, presumably on the yet-to-be-announced macOS 10.15.

Apart from the iOS and tvOS updates, Apple is releasing the final version of watchOS 5.2.1 today with ECG app support for Iceland and a handful of Eastern European countries. macOS Mojave 10.14.5 is also being released, largely focusing on bug fixes but also adding a requirement of notarization for third-party apps seeking Apple’s approval without being released in the Mac App Store. Apple says that 10.14.5 users will be able to use AirPlay 2 to stream Mac content to AirPlay 2-enabled smart TVs, including Samsung’s.