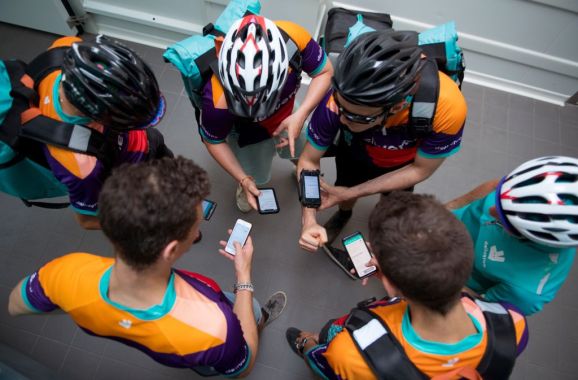 Bikers working for Deliveroo wait for their instructions at one of the first Deliveroo Editions in France kitchens on July 3, 2018.

Amazon’s recent investment in British food delivery company Deliveroo late last week is being widely hailed as a “shot across the bow” of Uber Eats, Grubhub, and a bevy of other mobile food delivery market players, but it is much more than that.

Amazon makes very few moves without a long-term plan and would not need to use a pea shooter when it has weapons of mass destruction via a massive war chest of money at its disposal. Further, Amazon is not shy about making big moves to support its long-term strategic initiatives, like its purchase of Whole Foods in 2017, a move that is still wreaking havoc on the grocery sector. So if the company’s goal was to dominate, or even make waves, in the food delivery vertical, it would have made a much broader move than this venture.

Instead, this move is another foray into last-mile logistics for the eCommerce giant as it continues its quest to own the customer experience from “mouse click to doorbell ring”, and an inexpensive way to achieve that following one of the company’s core mantras of frugality.

Amazon could have just purchased Deliveroo outright (the food delivery company was valued at $2 billion in 2017), but instead it is taking a lighter touch. That is consistent with other moves of this type such as its investments in Atlas Air, Air Transport, and autonomous driving startups Rivian and Aurora, and its partnership with self-driving truck startup Embark to handle some of its cargo shipments. All of these moves are about shoring up the control, customer experience, and logistics of getting shipments to their customers.

Amazon is a “test and learn” culture. Every program and change to the customer experience goes through a rigorous series of tests and refinements before it’s announced, or sometimes even seen, in the outside world. This new partnership with Deliveroo gives Amazon insights into the core workings and logistics of real-time home delivery when time is a factor (hot food) without having to enter the business itself. It can then take those learnings back to the mothership and integrate them into its own processes, or use the intelligence gathered to make an acquisition to fold into the company like it did with the robotics company Kiva in 2012.

The eCommerce giant announced in its earnings call this month that it would extend one-day shipping across the US to its Prime customers with an $800 million investment. This move sent jolts through the eCommerce world, forcing rival Walmart to make a similar announcement shortly after, and other companies will no doubt follow suit. Amazon already served many of its markets with this shipment offering, so expanding it was more about squeezing its competitors than it was about winning new customers. By forcing the competition to spend money defensively to keep up rather than innovating on their own terms and timelines, Amazon is driving the bus here. Most companies desperately need to transform themselves digitally to meet rising customer expectations, and keeping up with new table stakes for online delivery makes it more difficult to focus on anything else.

Most of Amazon’s competition was initially built for a pick-up-in-store model and not for a ship-to-home model. As a result, large players like Target and Walmart have had to move faster to continue to meet the expectations of customers satisfied with Amazon’s initial two-day free shipping promise. This move to one-day shipping is merely the next chapter. Prime Now, Amazon’s one-hour delivery service, went from concept to delivery in less than four months, and from its first delivery to covering 88 major cities in the US in just over two years.

Amazon’s investment in Deliveroo is not about food, or even returns on its investment, but rather it is about learning how to get products to customers even faster, and how to do it using a distributed network of workers who are not Amazon employees. Before we know it, two-day shipping will seem as antiquated as a rotary phone, and anything less than 30 minutes will seem like an inconvenience. Amazon’s competition will be hard-pressed to meet these expectations, and once again we’ll be in the era of “get it on Amazon” and all other companies will just be “everything else.”