Google has announced a number of enhancements to SOS Alerts, a safety feature first introduced to Google Maps and Search nearly two years ago.

SOS Alerts are designed to surface key information during natural disasters and human-induced catastrophes, including wildfire tracking, local news coverage, Twitter updates, relevant telephone numbers, and ways to donate to a cause. Starting today and rolling out over the next few weeks, SOS Alerts are getting a big makeover — adding visual data about disasters and a warning system that helps you navigate around potentially hazardous areas.

Eye of the storm

As part of the update, Google Maps will now show visualizations of hurricanes. In the days before an expected hurricane hits, users will see a notification card warning them if they are in its path. This feature will also show a storm’s anticipated trajectory and when it’s expected to pass various points along that route.

In the coming months, Google will add additional alerts if it thinks a crisis may impact your drive, and it will try to help you steer clear of any danger zones. 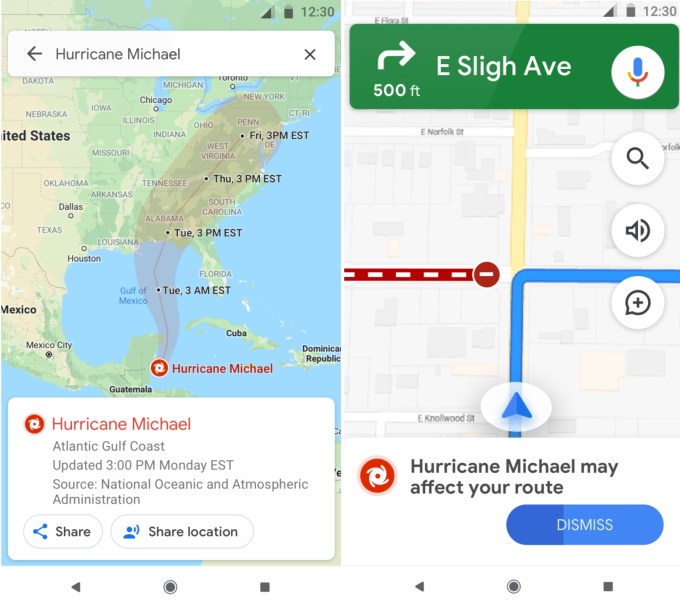 The new feature is not just about hurricanes, though. In the aftermath of an earthquake, SOS Alerts will also now show the “shakemap,” including its epicenter and magnitude, with different colors illustrating the intensity of the earthquake in relation to the location.

And Google Maps users in India, where some of the most devastating floods have occurred in recent years, will see forecasts highlighting areas a flood is mostly likely to affect, as well as degrees of severity by location. 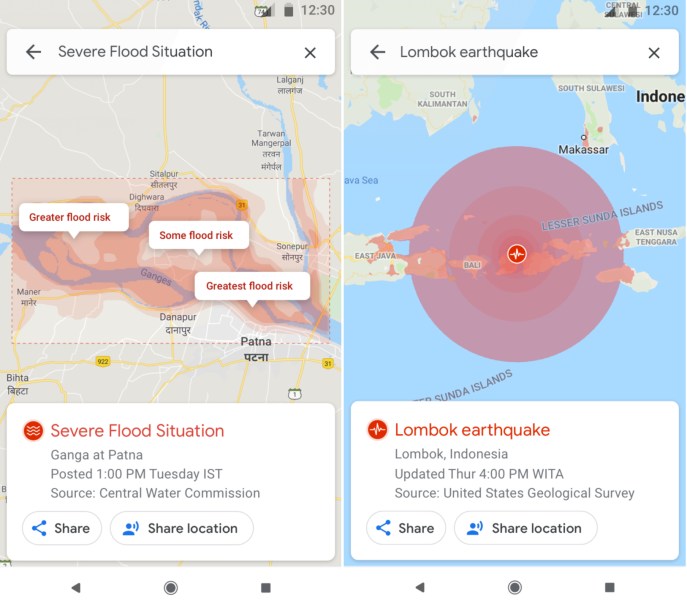 Above: SOS Alerts: Floods and Earthquakes

Though the Google Maps visualizations will only show up for those in the affected areas, putting event-specific terms in Google Search will surface similar information.

SOS Alerts are similar to Facebook’s Safety Check, which launched back in 2014. These types of features demonstrate how platforms with massive scale can be used to help millions of people in times of crisis. Indeed, Google’s reach is used to convey all manner of crisis-related information, such as AMBER alerts to locate missing children and drug disposal locations to combat the opioid crisis.

The new hurricane visualizations will be landing in Google across all its mobile and desktop platforms over the coming weeks in the U.S., Mexico, the Caribbean, Western Europe, Japan, Taiwan, China, the Philippines, Vietnam, Thailand, and South Korea. The earthquake shakemaps and navigation warnings will be available globally, while the new flood forecast tools will start rolling out in Patna, India before expanding to the Ganges and Brahmaputra regions.