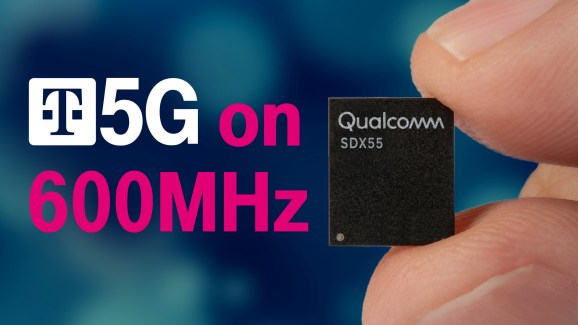 While competitors focused their earliest 5G efforts on short-range millimeter wave hardware, T-Mobile steadfastly maintained that its strategy — blanket the U.S. with long-range 600MHz 5G coverage and then boost speeds with 2.5GHz and millimeter wave as needed — was a better approach to achieving truly nationwide 5G coverage. Today, the carrier took a major step toward that goal, as it announced successful completion of the world’s first low-band 5G data session on a commercial 5G modem.

T-Mobile’s feat was accomplished in cooperation with Qualcomm, which supplied the Snapdragon X55 5G modem and handset radio tuning hardware, and Ericsson, which makes 5G tower radios with 600MHz support. In short, the companies demonstrated that the same Snapdragon modems that will be used in high-band (millimeter wave) and mid-band (“sub-6” or 2.5-3.5GHz) 5G devices can also be used for low-band (600-700MHz) 5G, enabling a single device to access 5G service across a very wide range of radio spectra.

“This is a key step toward achieving our vision of 5G for all,” said T-Mobile CTO Neville Ray. “This modem will power devices that tap into the 600MHz low-band spectrum we’ll use to blanket the country with 5G. And we’re not stopping there. If regulators approve our merger with Sprint, we’ll have the crucial mid-band spectrum and resources needed to supercharge our network and deliver broad and deep transformational 5G across the U.S.”

Initial 5G devices from Verizon and AT&T are capable of delivering exceptionally fast speeds outdoors, reaching upwards of 2Gbps when a user is close to a “small cell” millimeter wave transmitter. But the high-band millimeter wave signals struggle to penetrate walls or windows and only travel short distances before becoming inaccessible to devices. Sprint’s first 5G devices instead use mid-band 2.5GHz frequencies that offer slower data speeds but travel further, and into buildings.

T-Mobile’s decision to rely heavily on 600MHz as its foundational 5G technology has benefits, including building penetration and even longer distances, measured in the “hundreds of square miles.” But it also has consequences, including lower peak speeds and comparatively little support from early 5G device makers. The carrier had previously partnered with Intel on its 600MHz 5G development initiative, but Intel gave up on 5G smartphone modems in April. Luckily for T-Mobile, Qualcomm’s X55 modem was ready to pick up the slack.

“Today’s data call marks a significant milestone in 5G’s ongoing rollout across the United States,” said Qualcomm president Cristiano Amon, “paving the way for the launch of commercial networks and devices on low-band FDD spectrum. This call demonstrates the ability to dramatically increase 5G’s global footprint, and we look forward to continuing our work with industry leaders like Ericsson and T-Mobile to unlock the full potential of 5G for consumers and new industries around the world.”

T-Mobile previously said its 600MHz 5G network would launch in the second half of this year, pending the release of compatible hardware. While Ericsson’s 5G-compatible cell towers are already in place, awaiting a switch-flipping software update to deliver T-Mobile’s 5G service, “second wave” 5G handsets with Qualcomm’s Snapdragon X55 modem are expected to arrive in stores around the end of this year. Canadian cellular giant Rogers is expected to follow T-Mobile’s lead on 600MHz in the near future.