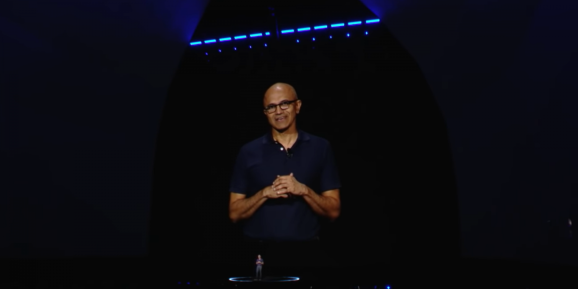 Microsoft CEO Satya Nadella didn’t say anything significant at Samsung’s Galaxy Unpacked this week. You could argue he didn’t have to. The CEO of a $1 trillion company showing up to your event is enough to make a statement.

And the statement is that Microsoft and Samsung are strengthening their partnership in a variety of areas, including to bring Android and Windows closer. Microsoft’s Word, Excel, PowerPoint, Outlook, LinkedIn, OneDrive, and Your Phone apps will come preinstalled on the Galaxy Note10. Samsung has built OneDrive sync support directly into its Gallery Android app and revamped DeX to support plugging into a Windows computer.

Before Nadella hit the stage, Shilpa Ranganathan, general manager of Microsoft’s mobile experiences group, video-conferenced in to show off some of the integrations. Samsung aside, Ranganathan announced that Your Phone will support making and receiving calls directly on your PC later this year. That’s certainly noteworthy, but nowhere near as useful as the existing functionality — letting you access your text messages, photos, and notifications right on your PC.

But Samsung has bundled Microsoft apps before, and even Your Phone integration should not surprise anyone. Your Phone is still limited to select phones running Android 7.0 or greater. The list is quite short: Samsung Galaxy S10e, Galaxy S10, Galaxy S10+, Galaxy S9, Galaxy S9+, Galaxy S8, Galaxy S8+, Galaxy A8, Galaxy A8+, Galaxy Note9, Galaxy Note8, OnePlus 6, and OnePlus 6T. Now we can add the Galaxy Note10, Note10+, and Note10+ 5G to the list. Given the list consists almost solely of Galaxy devices, everyone knew Samsung and Microsoft were already working closely on the functionality.

Microsoft and Samsung have had a troubled relationship over the decades. In September 2011, the two tech giants signed a cross-licensing patent deal wherein Samsung agreed to pay Microsoft for licensing patents upon which Android allegedly infringed. Since that point, the relationship has been on the mend.

I’ve opined before that Samsung should have adopted Cortana instead of developing Bixby. Given that Samsung didn’t mention Bixby once during this week’s event, the Galaxy Home still hasn’t launched, and the Harmon Kardon Invoke was a flop, it’s increasingly clear both companies would have benefited from working more closely together.

They’re increasingly doing that, but it’s taking years. Hence why Nadella didn’t have much to say.

Here’s the full transcript, for posterity:

Thank you so much, DJ. It’s so awesome to be here at your launch event. Microsoft and Samsung have had a long history of innovation across everything that we do — hardware, software, and services. And today what we announced and what Shilpa showed you marks the next stage of this partnership. And more broadly, a profound shift in how we interact with the many devices in our lives. For years, applications have been built and purpose-built for single devices, whether it’s the phone, the PC, or the TV, or even your watch.

But in a world of 5G, cloud, and AI, we get to rethink it all and reimagine it. We believe in a future that will be multi-device and multi-sense. Every experience will be multi-device and multi-sense. A world where the interaction model we have with computing no longer just starts with the device, but starts with the people. It includes all the devices in our lives. And together with Samsung, we’re making this a reality. Our ambition is to help people be productive on any device, anywhere. From calls and text messages, to emails and photos, we’re making these everyday experiences, great. The interactions across all the devices seamless.

As you saw today, now you can instantly sync your photos across all of the devices, you can edit, annotate, anywhere. Keep your most personal information secure and right at your fingertips. Access text messages and make and take calls from your PC. And you can do it using any input: voice, pen, touch, and more.

Microsoft’s mission is to empower every person and every organization on the planet to achieve more. At any moment, we want within your arms’ reach the greatest of experiences, wherever you are. And the combination of Microsoft’s intelligent experiences and Samsung’s powerful, innovative new devices like the Galaxy Note10 and Galaxy Book S make this possible. This is just the start. And there is much more to do and much more to come and we are very, very excited about this partnership. And back to you, DJ.

It’s been “just the start” for almost a decade.