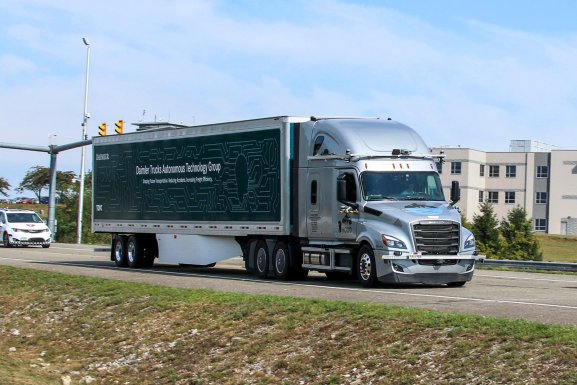 Another day, another fleet of self-driving vehicles hits the road. Daimler, the Stuttgart, Germany-based automaker behind Mercedes-Benz, announced that it has begun testing autonomous trucks on Virginia highways in partnership with Torc Robotics, the startup it recently agreed to acquire a majority stake in.

The trucks in question — Freightliner Cascadias retrofitted with arrays of lidar sensors, cameras, and radar and Torc’s self-driving software — will have trained drivers and engineers onboard as they pull trailers with added weight to simulate loads near Torc’s headquarters in Blacksburg, Virginia. The vehicles are described in the press release as level 4, or capable of operating with limited human oversight under select conditions as defined by the Society of Automotive Engineers.

Daimler separately notes that its wholly owned commercial vehicle division, Daimler Trucks North America (DTMA), is designing a truck chassis tailored for automated driving, along with the infrastructure to support level 4 truck testing in the next decade. It’s currently implementing level 2 tech in its latest version (5.0) of its Detroit Assurance platform, which will include automatic lane centering and lane-departure protection features but require drivers to remain engaged at all times.

Daimler expects the platform to become broadly available in the first quarter of 2020.

This is the latest of several moves DTMA has made in pursuit of a self-driving future. At the Consumer Electronics Show in January, it announced it would invest $570 million to achieve level 4 driving within a decade. And in June DTMA established an Autonomous Technology Group to consolidate its automated driving activities across the globe, including Torc’s operations in Blacksburg.

“Bringing level 4 trucks to the public roads is a major step toward our goal to deliver reliable and safe trucks for the benefits of our customers, our economies, and society,” said Martin Daum, head of Daimler’s global truck and bus division.

Torc, which was founded in 2005 by a group of engineers from Virginia Polytechnic Institute and State University, initially focused on automated technologies across industries such as military, agriculture, mining, and automotive. In 2017, however, the Blacksburg-based company pivoted to self-driving car tech, and shortly afterward it forged a partnership with Transdev to build fully driverless shuttles.

Daimler has plenty in the way of competition, including Thor Trucks, Pronto.ai, TuSimple, and Aurora — the last of which attracted a $530 million investment in February at a valuation of over $2 billion. There’s also Ike, a self-driving truck startup founded by former Apple, Google, and Uber Advanced Technologies Group engineers that has raised $52 million, and venture-backed Swedish driverless car company Einride. Meanwhile, Paz Eshel and former Uber and Otto engineer Don Burnette recently secured $40 million for startup Kodiak Robotics. That’s not to mention Embark, which integrates its self-driving systems into Peterbilt semis and which launched a pilot with Amazon to haul cargo, or driverless truck solutions from incumbents like Volvo.

But there’s plenty of cash to go around. The autonomous vehicle industry is predicted to reach 6,700 units globally, totaling $54.23 billion this year, and it stands to save the logistics and shipping industry $70 billion annually while boosting productivity by 30%.