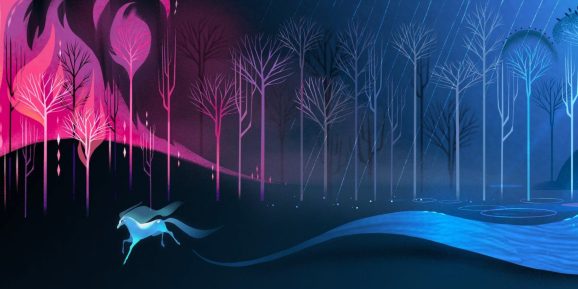 Disney’s varied steps into the sprawling world of mixed reality have included everything from complete Star Wars and Wreck It Ralph VR experiences at The Void to animated VR short films such as A Kite’s Tale. Now the company is taking its next step forward in the latter category with Myth: A Frozen Tale, an immersive VR experience that will launch tonight alongside the feature-length movie Frozen 2.

As director Jeff Gipson notes, Myth will be the first VR film to have a premiere on Hollywood Boulevard when it debuts tonight at the Dolby Theatre, though it’s unclear how and where the short will be distributed thereafter. Disney says that it’s using “the latest VR technology” for Myth, most notably including an egg-shaped Positron Voyager Chair — a moving pod with 35 degrees of vertical forward and backwards tilt, plus 360 degrees of rotation.

Unlike Disney’s prior VR shorts, which have used original characters and settings, Myth is directly based upon one of the company’s most popular franchises. Teases from the VR short suggest that viewers will use “the latest VR technology” to experience a mother’s bedtime story to a child, using stylized artwork of an enchanted forest and elemental creatures introduced in Frozen 2, plus narration and an original musical score.

Disney’s first VR short, Cycles, debuted last year at Siggraph 2018, while A Kite’s Tale had its debut at Siggraph 2019 alongside a number of other lightly interactive VR films. Given Frozen’s popularity with young girls and their parents, Myth has the potential to bring VR to a very different audience than the Star Wars, Wreck It Ralph, and trade show crowds; Disney is expected to announce additional locations and dates for the experience after tonight’s premiere.