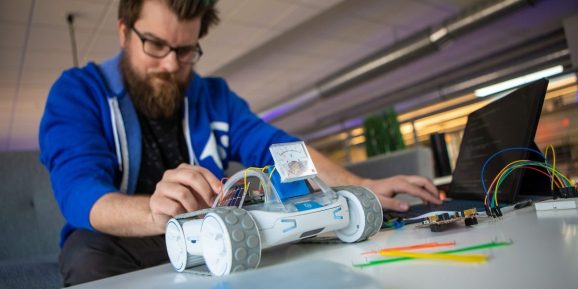 Sphero, the decade-old Colorado-based company best known for its programmable robots, today announced Company Six (CO6), a spinoff that will focus on commercializing intelligence robots and AI-based apps for military, EMT, and fire personnel and others who work in dangerous situations. To fund the productization and market entry of its initial products, Company Six — which will be led by former Sphero COO Jim Booth, alongside several members of the original Sphero team — has raised a $3 million seed investment.

Robots are ripe for first responder scenarios, as novel research and commercial products continue to demonstrate. Machines like those from RedZone can autonomously inspect sewage pipes for corrosion, deformation, and debris in order to prevent leaks that could pose health hazards. And drones like the newly unveiled DJI M300 RTK and Parrot Anafi Thermal have been tapped by companies like AT&T and government agencies for maintenance inspections and assistance in disaster zones. Company Six appears poised to carve out a niche in this market, which was estimated to be worth in excess of $3.7 billion.

Company Six began as Sphero’s Public Safety Division, the brainchild of former Sphero CEO Paul Berberian and Booth, both of whom have backgrounds in military service. Booth was an early mentor to Sphero cofounders Ian Bernstein and Adam Wilson during the Techstars Boulder Accelerator 2010 class. Booth joined Sphero after the Techstars program and helped launch and scale the company while managing a number of areas, including operations, human resources, and business development.

According to Booth, Company Six’s near-term goal will be to create technologies that are not only robust and feature-rich enough for professional applications, but affordable enough to be adopted by the majority of civilian and military personnel. The products and services it hopes to deliver — which will include a cloud-based analytics and monitoring platform — will be designed to maintain safety and situational awareness and improve decision-making in the field for critical incidents and everyday operating environments.

The spinout of Company Six follows Sphero’s acquisition of New York City-based modular electronics startup LittleBits, which gave Sphero a combined portfolio of over 140 patents in robotics, electronics, software, and the internet of things (IoT). At the time, Sphero said the major play for the burgeoning science, technology, engineering, arts, and math (STEAM) product segment would enable it to reach over 6 million students and 65,000 teachers across 35,000 institutions globally.

LittleBits was Sphero’s second acquisition after it snapped up Specdrums in June 2018. This marked a turning point for Sphero, coming after a $12 million funding round that brought its total raised to $119 million. After Sphero Mini and Disney-licensed products like Ultimate Lightning McQueen, R2D2, BB-9E, and Spider-Man failed to secure a foothold during the 2017 holiday season, resulting in layoffs at the company’s Boulder, Colorado; U.K.; and Hong Kong offices, Sphero pledged to redouble its commitment to education. As part of this effort, it spun out Misty Robotics, a company developing personal, extensible, and open source robots for the home.

Berberian will move into the role of chair as a part of Company Six’s launch. He’ll also preside over the spinout as Paul Copioli — the LittleBits, VEX Robotics, Fanuc, and Lockheed Martin veteran who joined Sphero in August 2019 — takes the reigns as CEO.