Here’s a brief recap of everything Apple unveiled at its WWDC 2019 conference.

As expected, Apple officially unveiled iOS 13 for iPhone and iPod Touch, with enhancements such as improved Face ID recognition and an all-new Dark Mode. Apple Maps is also getting its own version of Google Street View, called Lookaround.

But one of the key takeaways was that Apple is going all-in to position itself as a privacy-first company by adding features such as “allow just once” location-sharing for apps, and a tracking-free Apple Sign In option. The privacy theme was echoed in the smart home software framework known as HomeKit. Here Apple showcased several privacy features, such as HomeKit Secure Video, which analyzes videos from home security cameras and other domestic IoT devices locally before encrypting them and uploading to iCloud. The company also debuted new HomeKit-enabled routers from third-party manufacturers, which silo off devices to prevent entire networks from being compromised.

But perhaps the biggest surprise of the day, relating to Apple’s mobile devices at least, was that iPad will now have its own dedicated operating system (OS), which will be known as iPadOS. The offshoot will still be built on the same foundations as iOS, of course, but will offer unique features and layouts, including a new home screen design based on the classic grid and dock, with the ability to add widgets to the left side of the screen. 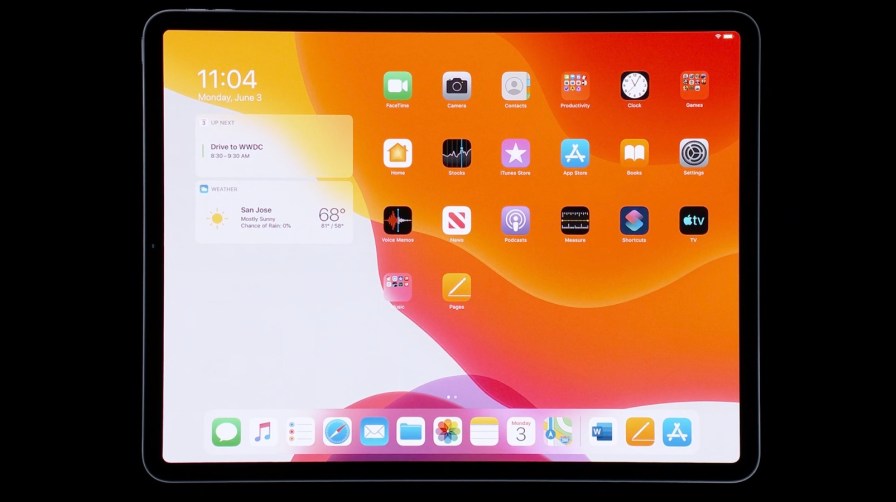 The iPad-specific OS will also feature an improved multitasking interface that builds on Split View mode, allowing users to flip through apps inside the Split View bar, open multiple instances of the same app, and more. iPads will also now be able to serve as second screens for Macs, replete with cursor-style input via an Apple Pencil.

While iPhone features and expensive hardware grabbed much of the day’s headlines, the focus of the event was, of course, on developers. And it’s against this backdrop that Apple unveiled SwiftUI, a development framework that makes it easier to build interfaces for all of Apple’s platforms — it requires less code and automates parts of the design process, including design layout, accessibility, localization, and more. SwiftUI is fully integrated into Apple’s upgraded Xcode 11 development platform for macOS.

Elsewhere at WWDC 2019, Apple also announced that it’s merging two of its popular discovery tools — Find my iPhone and Find my Friends — into a single app called Find My, which will be available for iOS, iPadOS, and macOS.

Return of the Mac 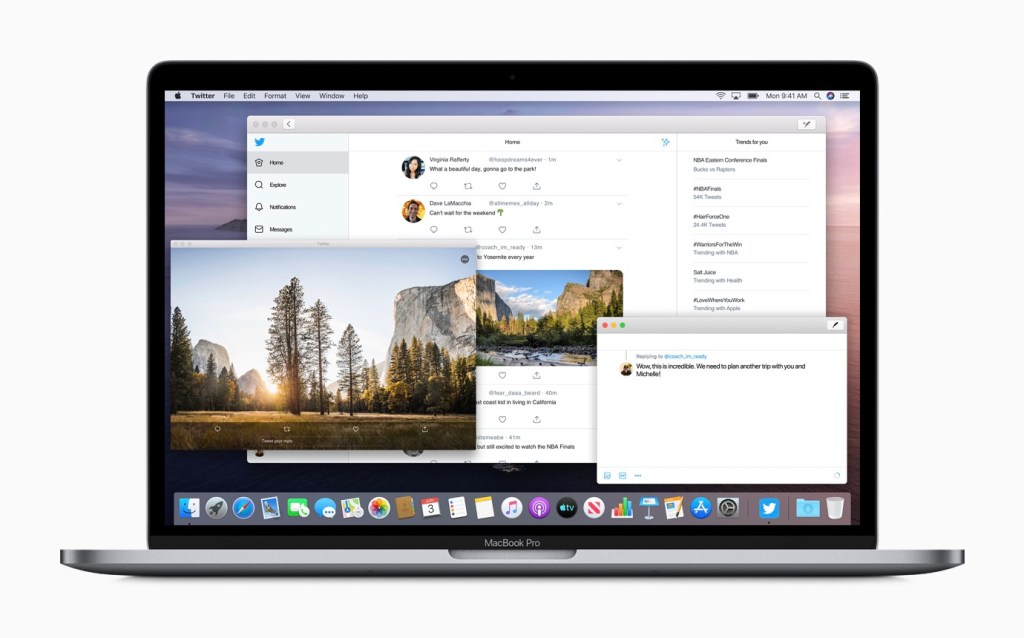 As expected, Apple lifted the lid on the next iteration of its OS for Mac computers. MacOS Catalina, or macOS 10.15, sports a number of updates, including Sidecar, which will allow Mac machines to use an iPad with Apple Pencil as a secondary display for apps such as Adobe Illustrator and Final Cut Pro X. And there will be new voice control smarts to help with accessibility, a feature that is also landing in the new versions of iOS and iPadOS.

And, as previously reported, Apple is bringing third-party iOS apps to the Mac, starting with iPad apps. Catalyst, as the feature is called, makes it easier for developers to port their mobile apps over to the desktop.

iTunes has been on the way out for a considerable period of time, and Apple used WWDC 2019 to reveal it is finally pulling the plug. When Catalina rolls out, iTunes will make way for separate apps covering music, podcasts, and TV.

Though WWDC is a developer-focused event, Apple has a track record of introducing hardware at the event. As such, Apple unveiled a new modular Mac Pro, which starts at $5,999 and features an Intel Xeon processor with up to 28 cores. 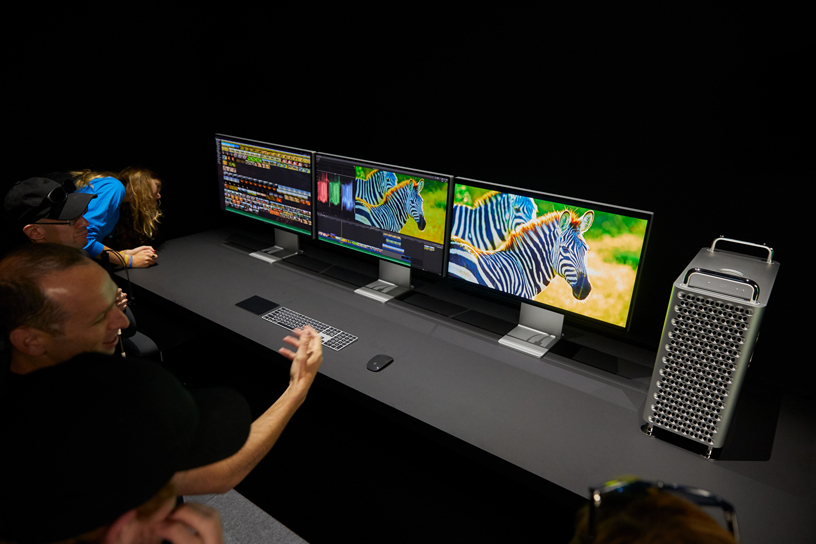 The company also debuted a new 32-inch LCD monitor — the Pro Display XDR sports a Retina 6K display, with support for HDR. It starts at $4,999, though an accompanying Pro Stand is also available for an extra $999. Ouch. 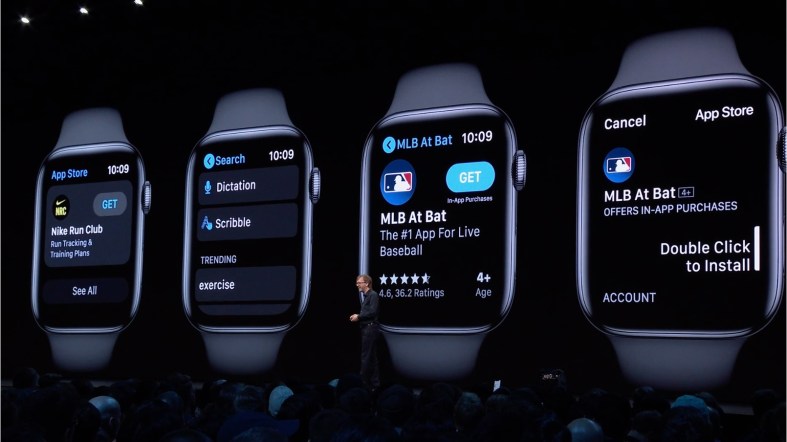 Apple used WWDC 2019 to showcase watchOS 6, which should reduce the Apple Watch’s reliance on the iPhone. Indeed, the upcoming Apple Watch OS update will usher in new standalone apps for Voice Memos, Calculator, and Audiobooks.

Apple also introduced the next version of its TV-focused operating system, tvOS 13. Apple TV users will soon be able to enjoy multi-user support, meaning everyone in the family gets their own tailored recommendations and “up next” lists. The upgrade will also usher in support for PlayStation and Xbox controllers.

Augmented reality (AR) also got some love at WWDC 2019. First up, Apple unveiled ARKit 3, the next incarnation of its AR software development kit (SDK), with support for new features, such as automatic real-time occlusion of people viewed by the host device’s camera, and real-time motion capture.

Apple also unveiled RealityKit, a framework that enables developers to blend virtual objects with real-world environments, and Reality Composer, which makes it easier for developers to build interactive scenes with full AR support.

And what better way to showcase Apple’s new AR toys than by inviting Microsoft on stage to unveil Minecraft AR? None, if you ask us.

Apple made a number of other notable announcements at WWDC 2019. In the artificial intelligence (AI) sphere, news emerged that Siri will be getting a more natural-sounding voice, while HomePod will soon deliver personalized music based on a user’s play history, and AirPods will work with Siri to read incoming messages as soon as they arrive.

Elsewhere, Apple introduced Core ML 3, the latest incarnation of its machine learning model framework designed to help iOS developers embed AI smarts into their apps. For the first time, developers will be able to offer on-device machine learning for their mobile apps.