Now that 2019’s Mobile World Congress has ended, it’s clear that the show’s biggest topics were the same ones Samsung spotlighted at its earlier Galaxy Unpacked event: 5G and flexible-screened folding phablets. While there’s no question that Samsung’s other two Galaxy reveals — 4G phones and wearables — will actually constitute the bulk of its sales this year, people can’t stop talking about the flashier upcoming technologies.

But there was one other product reveal that generated discussion this week, even if much of it was derisive and sometimes mean-spirited. Alpha is a hybrid smartphone and watch made by Nubia, a subsidiary of Chinese mobile company ZTE. It has a flexible four-inch display and will sell for around $500 in China, starting in April.

Headlines screamed that Alpha was the “craziest gadget at MWC 2019,” something “no one asked for,” and the “perfect wearable” for a “sci-fi obsessed cosplayer.” Those offering hands-on impressions took pains to point out that Alpha felt cheap in person, and was even weirder in practice than in concept. One publication “genuinely” suggested that the device’s designers were on drugs.

The nasty commentary reminded me of the first iPad’s debut, when some writers felt it necessary to tee off on everything from the “MaxiPad” name to the “just a big iPhone” design. Perhaps they were doing it for the lulz, but there was enough of that snarky sentiment to actively depress Apple executives who had been quietly working on the project for years.

Meanwhile, the iPad wound up single-handedly redefining and dominating the moribund tablet category, such that literally every successful tablet today looks and works essentially like Apple’s design. Some of the initial critics have apologized for their lack of foresight, while others have just moved on to new targets … like Nubia’s Alpha. 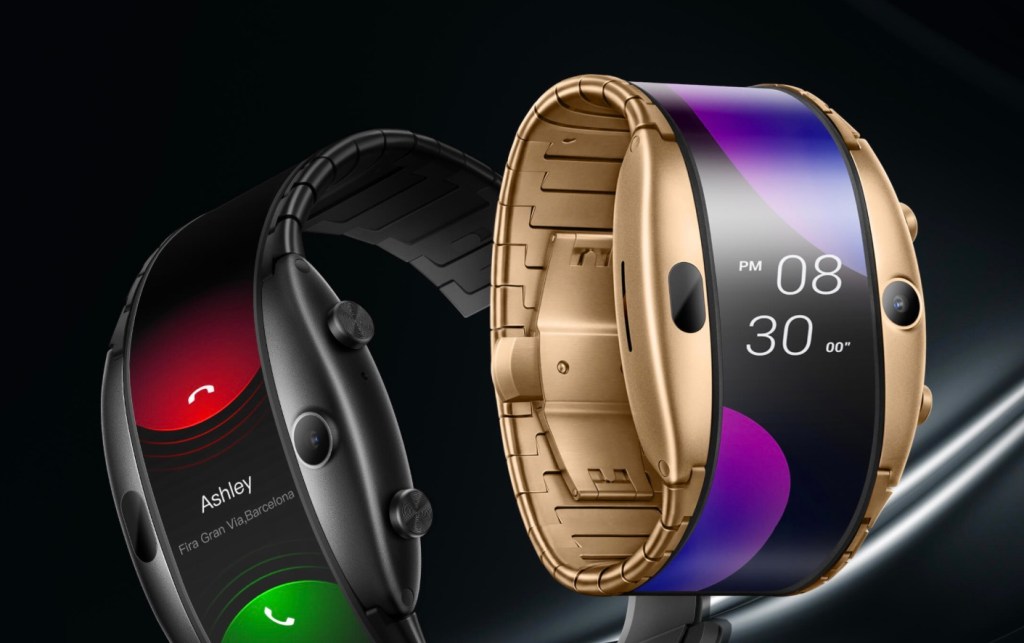 Alpha is a much easier target because it’s not an Apple-caliber product in any way. As the image above shows, it clearly draws too much inspiration from the objects it hopes to replace, somehow merging all the clunkiness of an old metal wristwatch with the conspicuous camera, sensor, and interface cues of a past-generation smartphone. It doesn’t take much thought or good taste for almost anyone to conclude that “I’d never wear one,” which makes it instantly fail the Apple design test.

But if I put Nubia’s many execution issues aside, I’m pretty convinced that Alpha conceptually represents where wearables are headed. I vividly remember judging design contests a decade ago where wraparound flexible displays like Alpha’s were posited as the future of music players and phones, though neither the screen nor glass technologies were ready for prime time.

As I noted in January, that clearly changed at this year’s CES, as multiple companies were showing off flexible screens capable of withstanding repeated bends. Similarly, Samsung and others have recently solved the “where to place the camera” question with hole-punched screens. That leaves only one major design question: Now that the technologies are ready, is this really the way we want next-generation wearables or phones to work?

I’m not going to tell you that every smartwatch or smartphone is going to look something like Alpha by 2030, but there are reasons that this general form factor is going to make a ton of sense for some people. Even though smartphones have continued to get bigger — and in many cases more difficult to keep in a pocket — there are signs of growing interest in smaller, more easily carried alternatives that have much of the same functionality. 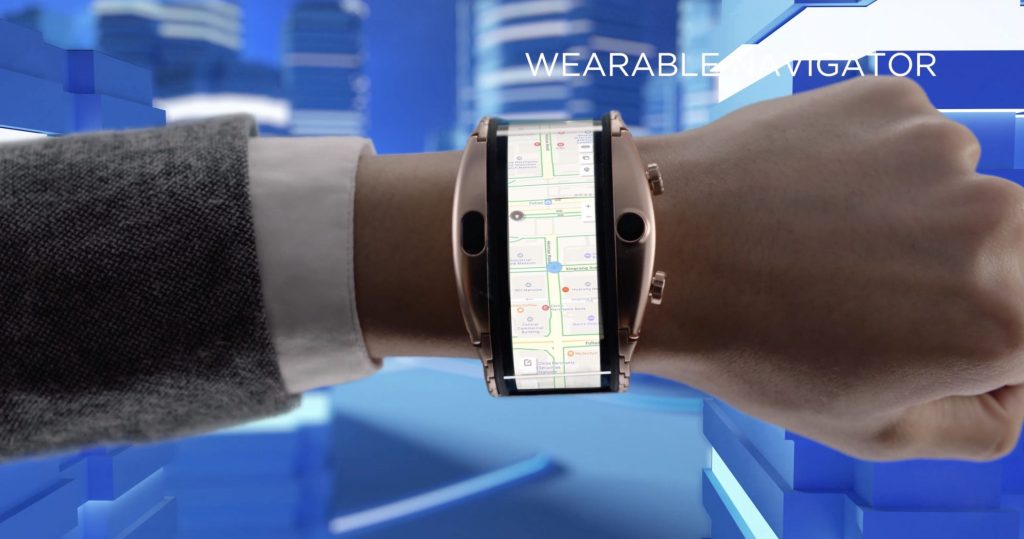 Imagine a smartphone that a child can be guaranteed not to forget or sit on, a woman without pockets or a purse could easily carry, or an elderly user might wear everywhere. Major smartphone makers are already taking steps towards this reality in LTE-ready Apple Watches and Samsung Galaxy Watches, albeit for practical reasons with a heavier emphasis on data use than phone calling.

Flexible screens extending into the band area will usefully enable future wearables to have larger display and touch areas than today’s smartwatches. Just as Nubia’s demo video shows, the curved screen can help you snap off-angle photos, more fully explore maps, and make better use of phone-style apps. You won’t be able to have a full smartphone experience on your watch, but you won’t have to wear glasses to make out app icon and map details like the Apple Watch’s, either. 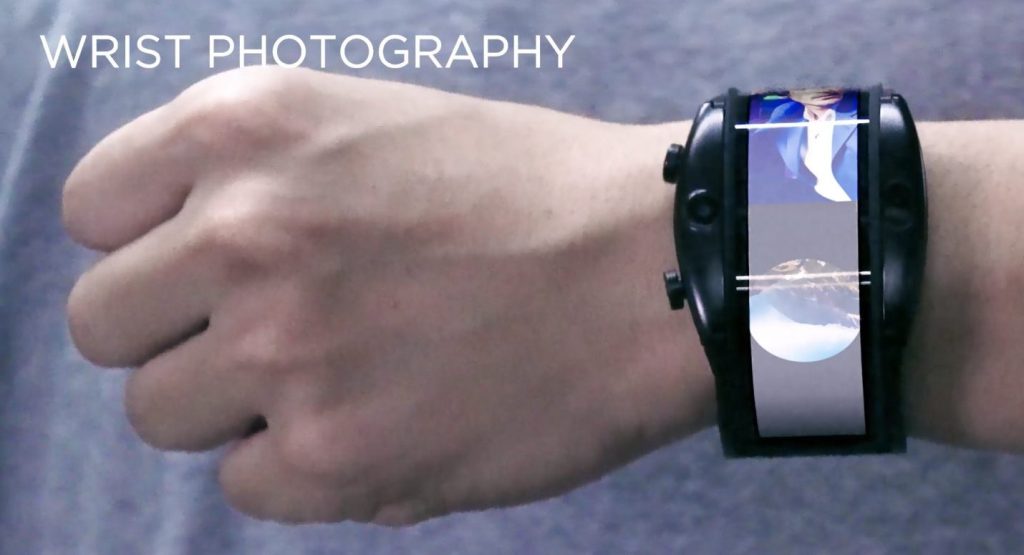 These changes will coincide with long-awaited radical improvements in both chips and battery life. Phone chips have already shrunk from a 14-nanometer manufacturing process to 7-nanometer processes, with even smaller 5- and 3-nanometer chips coming over the next few years. For wearables, these miniaturizing steps will take thumbnail-sized chips down to pinky nail- and then Tic Tac-sized footprints, enabling next-generation smartwatches to be thinner and more flexible than before — if companies want them to be.

One caveat worth bearing in mind is that wearables will not just go in one direction over the next decade: Just like today, we’ll see many different approaches and technologies at varied price points. But just as early smartwatches evolved to add GPS and cellular data capabilities in later generations, you can be certain that the trend will be to increase the power and capabilities of wearable devices until they’re even more like smartphones than they are today.

Nubia didn’t get the specifics of the form factor right with Alpha, but it deserves credit for actively working towards a vision that seemed more like science fiction than reality just last year. In the foreseeable future, sci-fi obsessed cosplayers won’t be the only ones wearing flexi-screened hybrid smartwatches — they’re going to start showing up on the wrists of mainstream users, and at some point probably become as common as Galaxy Watches are today.