Tell me if this sounds somewhat familiar: Verizon announced today that its next-generation 5G network is now live in “parts of” Los Angeles, California, promising “super-fast speeds” at a handful of landmarks including the L.A. Convention Center, the Staples Center next door, and the major transportation hub Union Station. “No more California dreaming of 5G,” Verizon says, “the next generation wireless technology is here and available in Los Angeles.”

Put aside the fact that all three of Verizon’s rivals were already offering 5G service in Los Angeles before today — so was Verizon.

Depending on how you count its prior announcements, this is either Verizon’s second or third time touting 5G availability in Los Angeles. Back in May 2018, the U.S. carrier picked L.A. as one of its first four cities for home 5G service, and began serving customers there in October 2018. Then a few months ago, it touted live mobile 5G service at the same L.A. Convention Center it mentioned in today’s announcement — arguably the highlight of its exhibition area (shown above) at Mobile World Congress Los Angeles.

In other words, this isn’t really the start of Verizon’s 5G coverage in L.A., and if you lived in the right neighborhood, you might have already been using Verizon 5G service for well over a year. That means today’s “news” isn’t really news; it’s a sign of the struggles major U.S. carriers will face in 2020 as they build 5G networks worthy of the hype they generated in 2019.

Verizon was so obsessed with being the world’s first carrier to commercialize 5G that it launched a pre-standards 5G network in several cities — but independent research confirmed that it only covered tiny parts of those cities, such as under 10% of Sacramento. Instead of continuing to build the network with pre-standards hardware, Verizon paused its 5G rollout and promised to expand in the second half of 2019. Then it rushed its mobile 5G launch to beat South Korea for “world’s first” bragging rights, putting up standards-compliant 5G small cells on some streets in two cities. 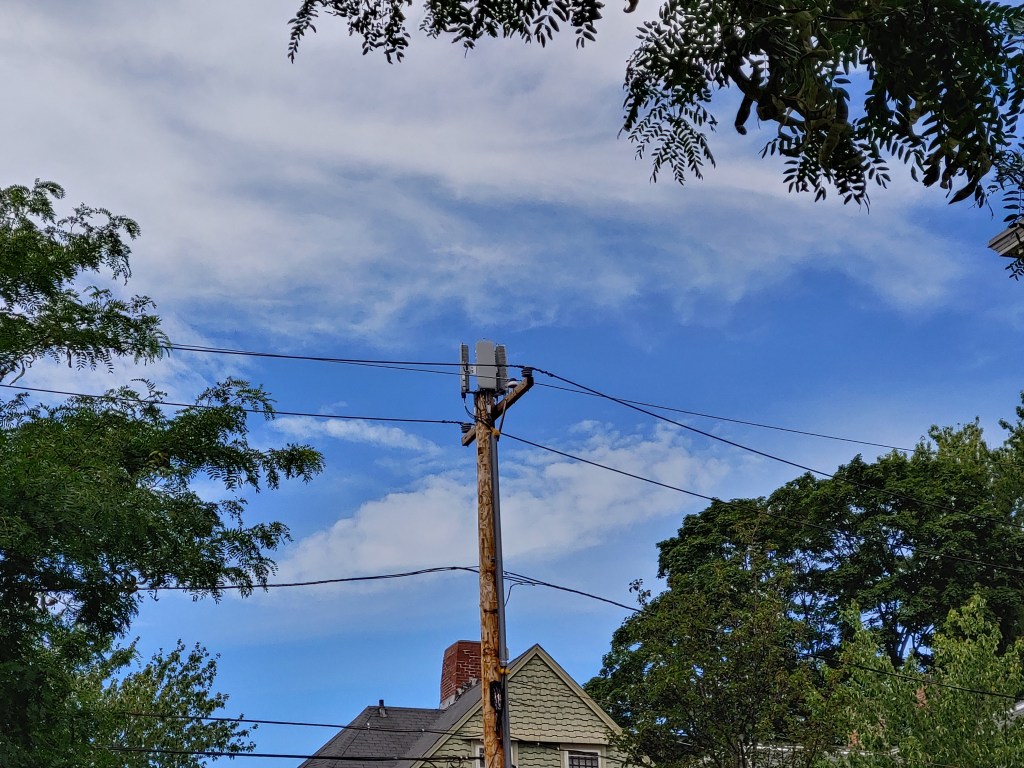 To its partial credit, the carrier has since brought 5G service to “parts of” roughly 20 cities. It also set up 5G in certain NFL stadiums and arenas — apparently accessible via loaner phones — as well as a shipyard, and promises to offer 5G in parts of 10 more cities soon.

I previously referred to Verizon’s 5G rollout strategy as “bizarre,” and nothing that’s taking place right now has changed that perception. Offering service on a few city blocks or at a handful of public venues isn’t actually lighting up a city with 5G service, and as tests of Verizon’s network have shown, its 5G is fast where you can find it, but spotty at best — not something paying customers can rely upon. That hardly seems like true “coverage” to me.

It’s hard to say whether Verizon’s 5G network is in better or worse shape overall than its rivals. T-Mobile launched nationwide low band 5G this month, covering plenty of physical space with 5G service that ranges from pretty fast to 4G-level slow. Sprint’s 5G network covers only a handful of cities, but fairly comprehensively, with much faster speeds. And AT&T wound up putting businesses first and trickling out low-speed 5G service to consumers later, a strategy roughly as perplexing as Verizon’s. 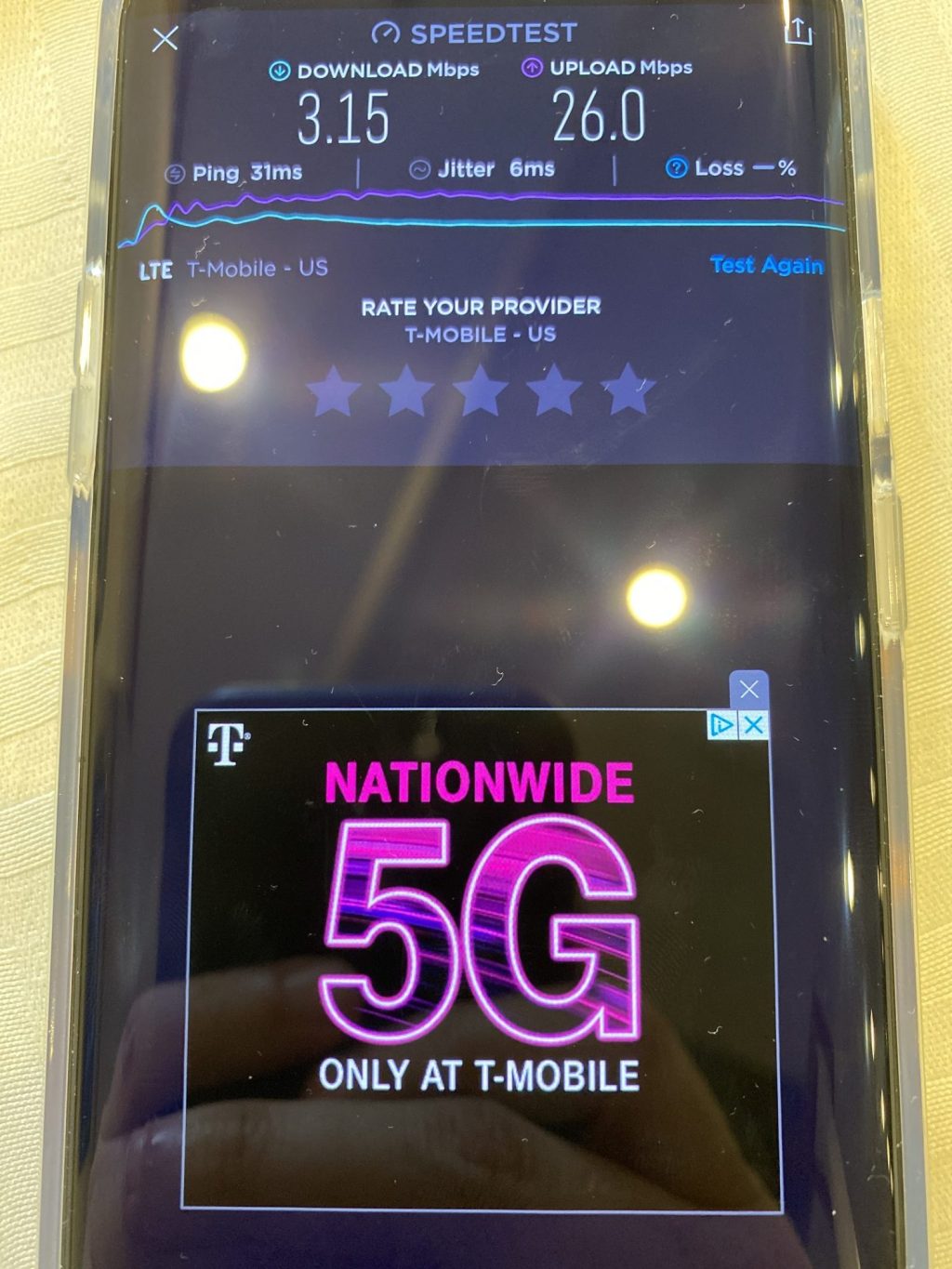 Above: A T-Mobile phone Speedtested at Los Angeles’ LAX airport hit only 3Mbps on the 5G network, while an ad touts that network.

Cynics have suggested that all four major U.S. carriers’ 5G networks have major problems heading into 2020, and that none will be worth supporting even by the end of next year. While I disagree, I’ll concede that Verizon’s marketing launches and relaunches of 5G in Los Angeles haven’t helped its case, just as T-Mobile marketing its 5G network in areas where it offers only 4G-like speeds won’t help it with consumers. When a carrier says it’s launching 5G in Los Angeles, it needs to offer step-level performance improvements across most of Los Angeles — not just a 5G badge with 4G speeds everywhere, or super-charged 5G speeds only if you’re in a public park or train station.

My personal view is that these carriers are in better starting places for 2020 than they would have been without an industry-wide push to get moving sooner, and that each network that will be built upon and improved throughout the coming year. Here’s hoping the carriers won’t prove me wrong.