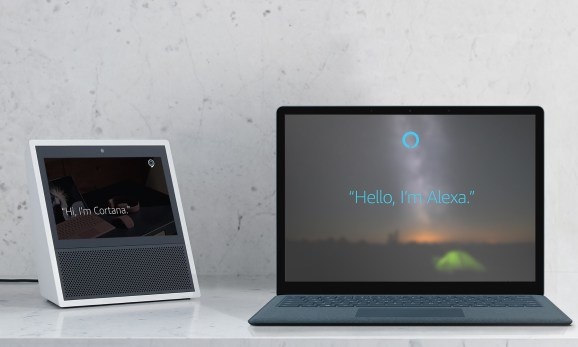 Amazon and Microsoft announced something of a curveball this morning as they released plans to integrate Alexa and Cortana, their respective voice-activated digital assistants.

Later this year, consumers will be able to request Cortana support through Alexa-powered devices, such as Amazon’s range of Echo smart speakers, while those using a Cortana-enabled device will be able to beckon Alexa.

“The world is big and so multifaceted,” said Amazon founder and CEO Jeff Bezos, in a press release. “There are going to be multiple successful intelligent agents, each with access to different sets of data and with different specialized skill areas. Together, their strengths will complement each other and provide customers with a richer and even more helpful experience. It’s great for Echo owners to get easy access to Cortana.”

It’s true that each company’s digital assistant will generally have their own areas of expertise — for example, Cortana will be more tightly integrated with Microsoft’s suite of software (such as Office), while Alexa is more in tune with audiobooks and online shopping. But opening their voice-activated AI vaults to one another will go some way toward boosting the appeal of such assistants to a broader consumer base. One device with multiple integrations is the general idea here.

“Ensuring Cortana is available for our customers everywhere and across any device is a key priority for us,” added Microsoft CEO Satya Nadella. “Bringing Cortana’s knowledge, Office 365 integration, commitments and reminders to Alexa is a great step toward that goal.”

To activate Alexa through Cortana, you would say: “Hey Cortana, open Alexa,” and vice versa when using an Alexa-powered device, such as an Amazon Echo. Then you could, for example, order groceries through Amazon from your Windows 10 PC, or activate Cortana on your Echo to find out when your next meeting is from your Outlook calendar.

But using this logic, surely it would make sense for all companies involved in this space to team up and pool their collective resources? Rivals in the space include Apple’s Siri and Google’s Assistant, each of which are now powering their own devices, including Apple’s HomePod and Google Home. In an interview with the New York Times today, both Amazon and Microsoft’s respective CEOs noted that there is no such deal with Apple or Google in the works, but they suggested that they would not be averse to the idea. “I’d welcome it,” said Bezos. “Hopefully, they’ll be inspired by it,” added Nadella. “At least that would be my hope.”

In reality, there is little incentive for Apple or Google to embrace such partnerships — they are each driven by their respective mobile ecosystems, where Siri and Google Assistant are positioned to power voice search on iOS and Android.

For now, Cortana is largely limited to Windows 10 PCs, though it also has a presence on Android and iOS through dedicated mobile apps. Microsoft is also working with a number of technology companies to produce Amazon Echo-like clones with Cortana at their heart, not to mention a Cortana-powered thermostat. And both Microsoft and Amazon are inking partnerships with carmakers to bring their voice assistants to vehicles.

By pooling their resources, the duo could go some way toward elevating their collective AI smarts over that of rivals.

Your move, Apple and Google.