Quartet, a technology platform that serves to bridge the gap between primary care and mental health providers, has raised $40 million in a series C round of funding led by F-Prime Capital Partners and Polaris Partners, with participation from existing investors including GV (Google Ventures) and Oak HC/FT.

Founded out of New York in 2014, Quartet offers a collaborative platform designed to connect physical care providers with those in the mental health fraternity, thereby improving a person’s overall wellbeing, while the platform also links in with insurance companies. The general idea is this: When you’re trying to manage an injury or illness, it can have a knock-on effect in terms of how you’re feeling mentally. Quartet wants to help foster a more holistic health care approach. 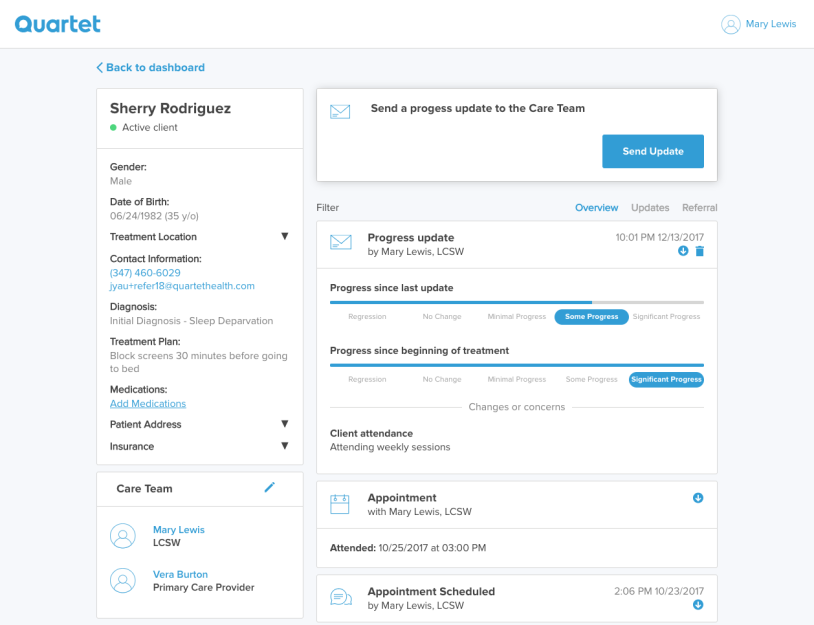 Quartet currently serves just a handful of markets across the U.S., including Pennsylvania, Massachusetts, Louisiana, Washington, Northern California, and New Jersey. Prior to now, it had raised $47 million, and with its latest cash injection it said that it plans to double down on its expansion plans across the U.S., while also investing in engineering and its product roadmap.

“Making collaboration between primary care physicians and behavioral health specialists work is a must if we are ever going to improve the overall health of our country,” noted Quartet founder and CEO Arun Gupta. “The bridge between mental and physical health is being built, and it’s technology that’s leading the charge.”

However, we’ve also seen a number of mental health startup investments come to fruition. Back in August, New York-based AbleTo announced a $36.6 million raise for its behavioral health platform, while U.K.-based Ieso Digital Health raised $24 million for a platform that offers psychological therapies and cognitive behavioral therapy (CBT). Related to this are meditation platforms such as Headspace, which recently closed a $36.7 million round, while Y Combinator alum Simple Habit raised a small $2.5 million round to help the world destress.

While GV has invested in a number of health care startups in the past, Quartet represented Alphabet’s first mental health-focused investment when it led on its $40 million series B funding round back in 2016. GV is taking a backseat for the series C round, but it’s notable that two previous participating investors — F-Prime Capital Partners and Polaris Partners — are joining forces to lead on this latest round.

“Having been involved with Quartet for several years, I’ve seen the company’s rapid maturation process firsthand, and it is much farther along than most health care companies at this stage,” added F-Prime Capital executive partner Carl Byers. “Quartet is harnessing technology and innovative thinking to drastically improve the delivery of care.”

As a result of the investment, Byers is joining Quartet’s board of directors alongside two other new additions: Ken Goulet, former executive vice president at health insurance company Anthem; and Lanham Napier, former Rackspace CEO and cofounder of VC firm BuildGroup.