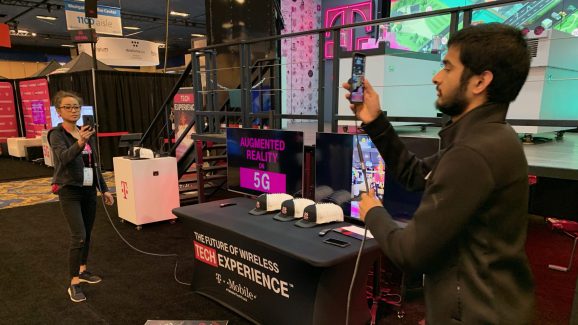 T-Mobile booth staffers from the University of Washington demonstrate augmented reality over "5G" at the 2019 CES in Las Vegas.

During a 5G-focused Mobile Innovation event at last year’s CES, Qualcomm President Cristiano Amon said he hoped to appear at 2019’s show with a working 5G phone on a live network. Since there were exactly zero 5G phones or networks in existence at that point, his plan sounded ambitious, but his quiet confidence made the outcome seem both inevitable and worth waiting for.

5G turned out to be one of the biggest topics at CES 2019, but as a journalist covering that beat, what I’ll remember most about this year’s show was that there was no convincing “5G is actually here” moment like that — from anyone, Amon or otherwise. Instead, there were plenty of media events and booths where 5G was mentioned, but most of the live 5G demos were underwhelming when they should have been jaw-dropping.

I covered Qualcomm’s and Intel’s 5G demos — plus Huawei’s lack thereof — last week, and offered a separate guide to Samsung’s 5G offerings in another article. To wrap up the series, here’s a look at the other 5G demos I saw at CES, plus some additional, post-show thoughts on the bigger 5G picture for 2019.

The best trade show booths make even boring products and services seem interesting by placing them in exciting contexts: a waterproof phone case might survive a shark attack in an aquarium, or a new service could be shown saving a person’s life. On the other hand, weak booths can make even exciting new offerings seem dull, or raise questions that observers didn’t have before. 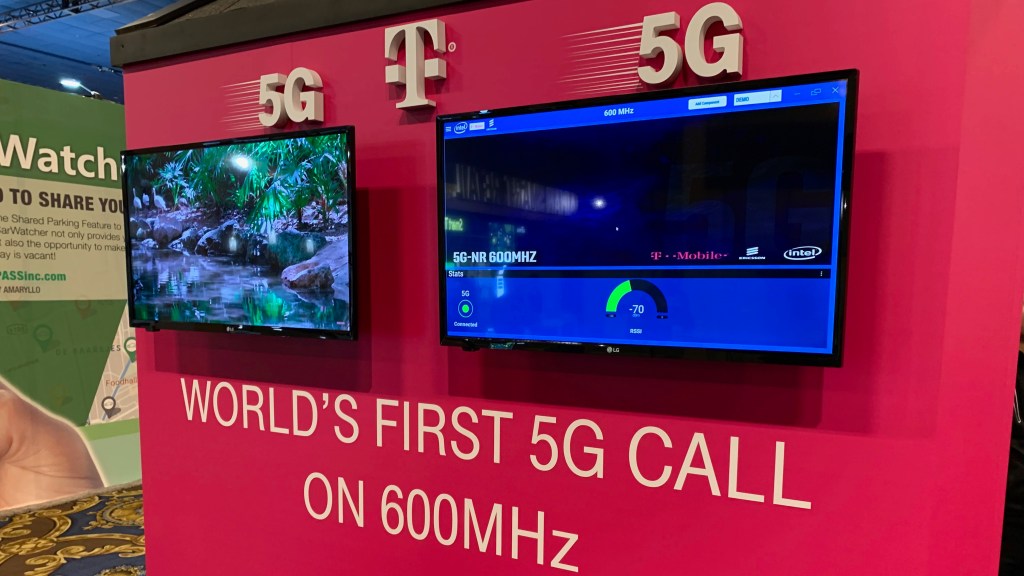 Unlike Verizon and AT&T, third-place U.S. carrier T-Mobile has not actually launched a 5G network yet, so its CES booth was an opportunity to tell its 5G story, winning over both journalists and customers. Rivals have built 5G networks using high-speed millimeter wave hardware, but T-Mobile is instead focusing on a lower-speed 600MHz network that it suggests will cover more people. 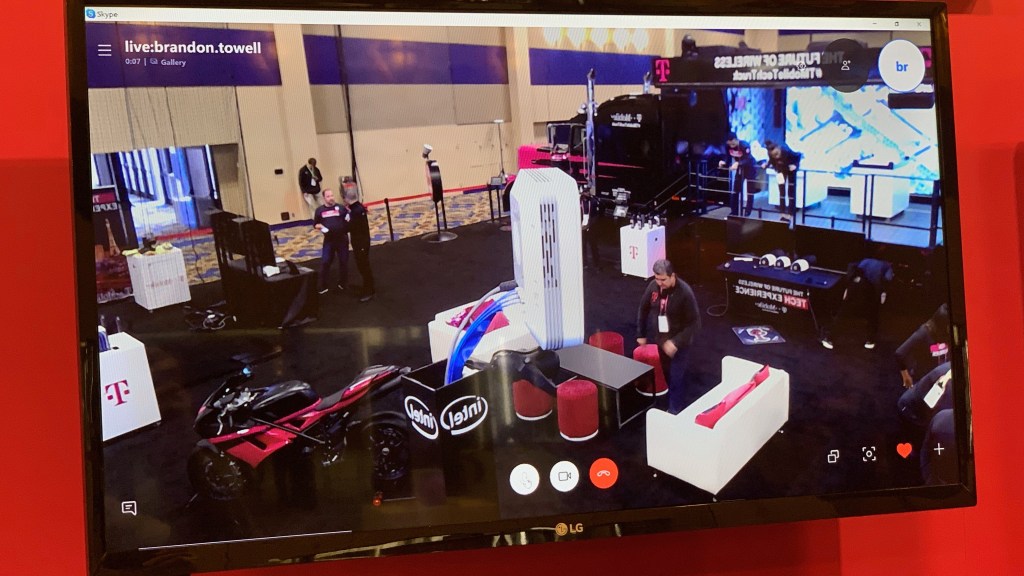 T-Mobile demonstrated its future network by sending live 4K video over a 600MHz base station from its booth to Intel’s booth. Oddly — and only disclosed if you asked — Intel was sending video from its booth back to T-Mobile over a 28GHz millimeter wave base station, not a reciprocal 600MHz connection. As one might gather from the photos, the demo had zero in the way of excitement: It was just a bland video feed of a booth. 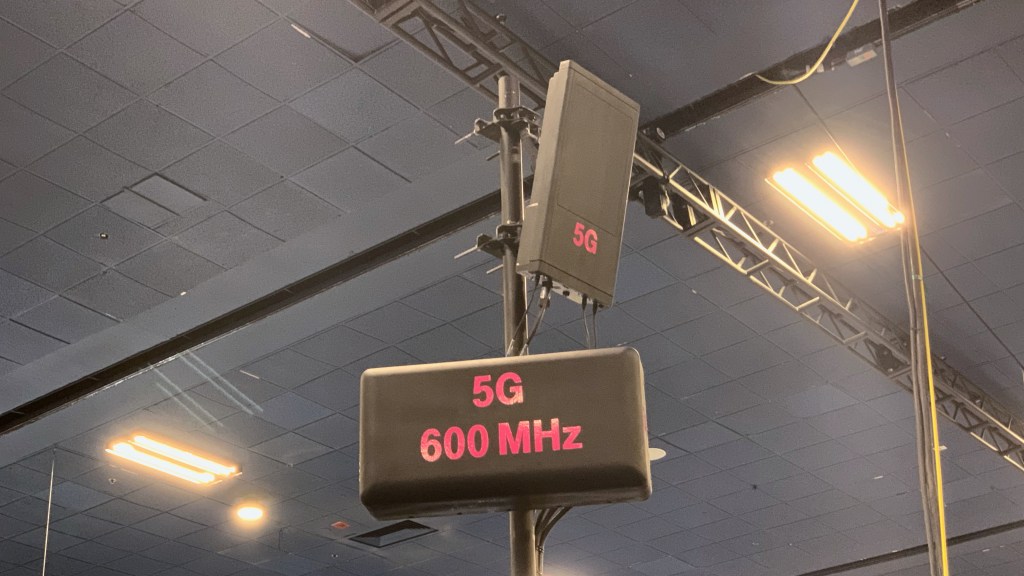 T-Mobile staffers pointed out live sample 5G base stations mounted above eye level if you wanted to see them. These base stations turned out to be the most significant 5G hardware found anywhere at the company’s booth; there were no prototype or final 5G smartphones, tablets, or computers on display, nor conspicuous hotspots. 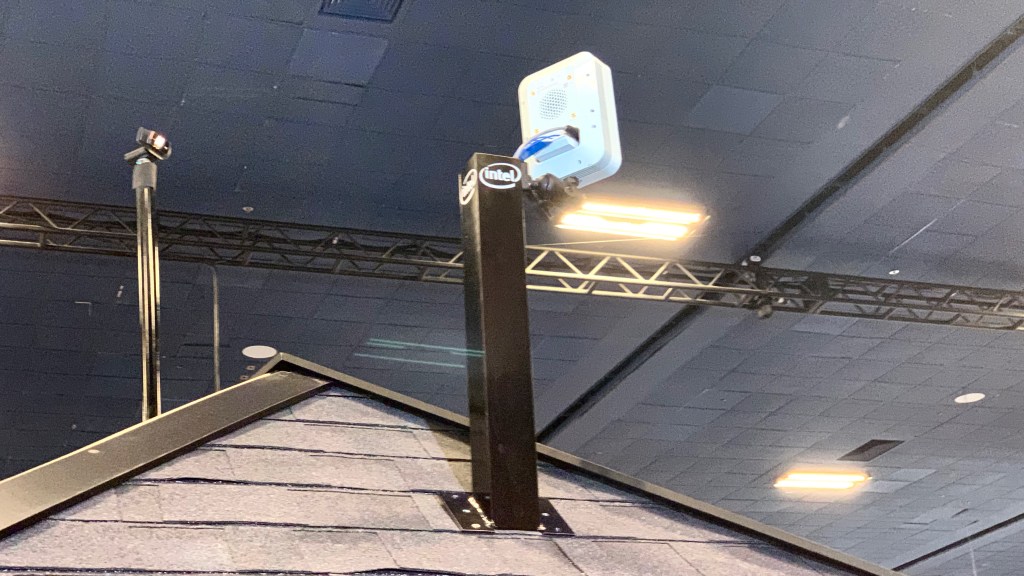 T-Mobile also had 5G hardware mounted on a fake rooftop, and sitting on the floor in a magenta-accented box that looked like an old Xerox copying machine. I’m not sure who these displays were intended to impress, but they didn’t look great. 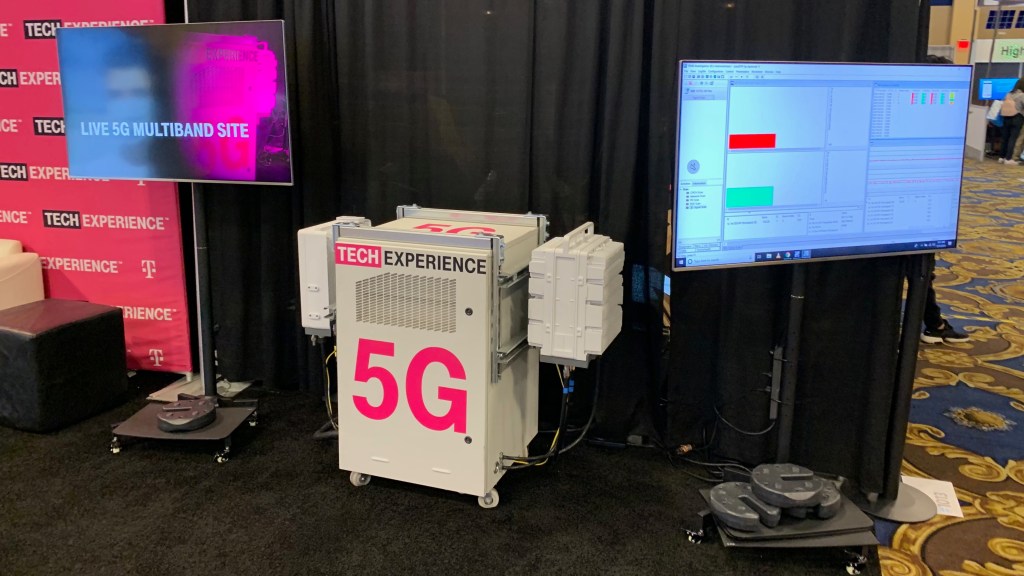 Rather than showing more of what its own network will do, another demo at T-Mobile’s booth was designed to undermine the value of competitors’ millimeter wave 5G hardware. An engineer showed me how a 39GHz millimeter wave signal could be killed instantly just by closing the door of a simulated home, or blocking the receiving antenna with a hand. The message was that you can’t rely on millimeter wave for indoor 5G coverage, a point Verizon addressed on day one of its 5G network launch by installing millimeter wave signal boosters inside homes and offices. 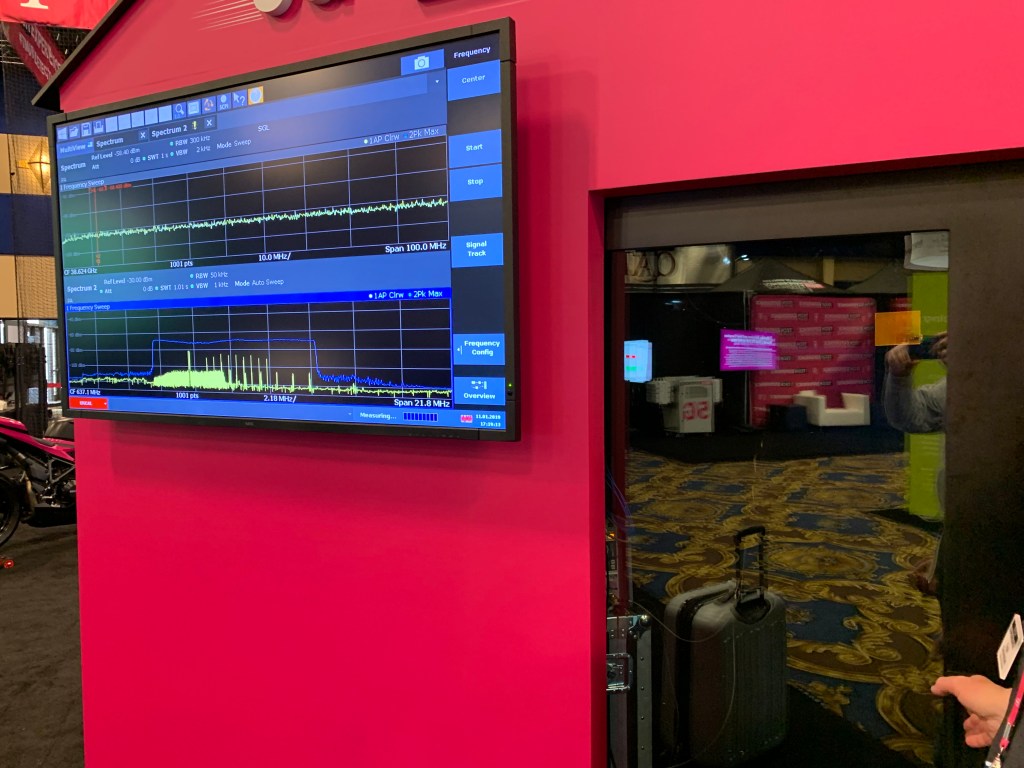 The most positive “5G” demo at T-Mobile’s booth used two people holding smartphones to play a game of virtual volleyball with an augmented reality ball — apparently to show off 5G’s high responsiveness and low latency. Unfortunately, the phones were 4G phones connected to hidden 5G hotspots, and their latency wasn’t anything special: around 50-60 milliseconds, I was told. By comparison, millimeter wave 5G is supposed to deliver under 10ms latency. 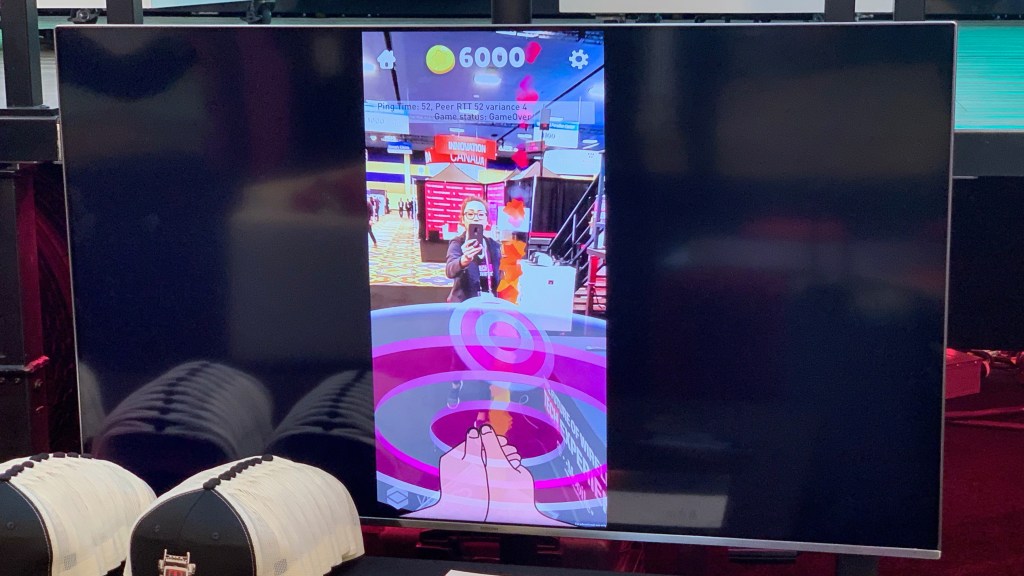 From where I stand, the single biggest issue with T-Mobile’s booth is that the company had a potentially compelling 5G story to tell, but its demos didn’t tell it well. In some cases, I felt like I was pulling teeth when I asked booth staff to provide concrete network performance numbers, and I walked away with the sense that the normally aggressive company was being somewhat defensive.

As an informed observer, I’d summarize T-Mobile’s story as this: T-Mobile is going to start by blanketing the United States with 400-500Mbps 5G service that will range in latency from 10 to 60 milliseconds, and select areas with millimeter wave will offer two to three times the speed and superior latency. While those numbers aren’t crazy fast, they’ll be three to ten times better in more places than most people see today, and will only improve over time.

But that’s my summary. It’s up to T-Mobile to convince people that it’s really happening, and after visiting the booth, I’m not yet quite convinced myself.

If any company tried to pick up where Qualcomm’s Amon left off last year, it was Verizon, which hosted the flashiest 5G-themed keynote of CES. New Verizon CEO Hans Vestberg took the stage for a mostly enterprise-focused event that was light on demos and heavy on corporate partnerships — ones that average consumers won’t care about. 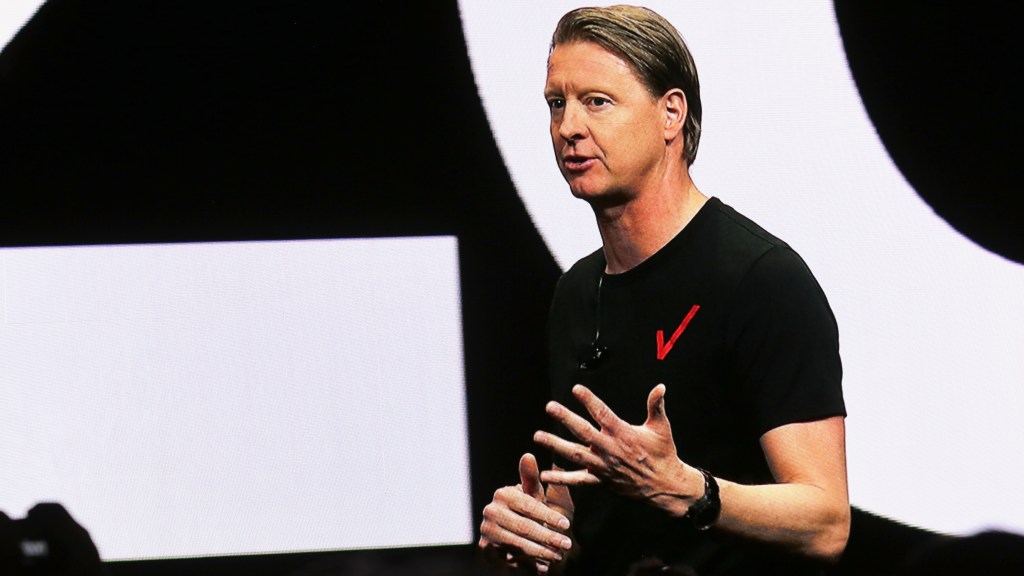 Vestberg said that 5G had eight currencies — basically, different selling points — that made it superior to 4G, and certain to transform the world over the next decade. But he didn’t show off a working 5G phone, and used somewhat forgettable video streams from other cities to demonstrate a 5G broadband speed test, a remote drone launch, and a VR-assisted basketball game. None was really exciting; the drone demo was just Vestberg pressing a “launch” button on a tablet. 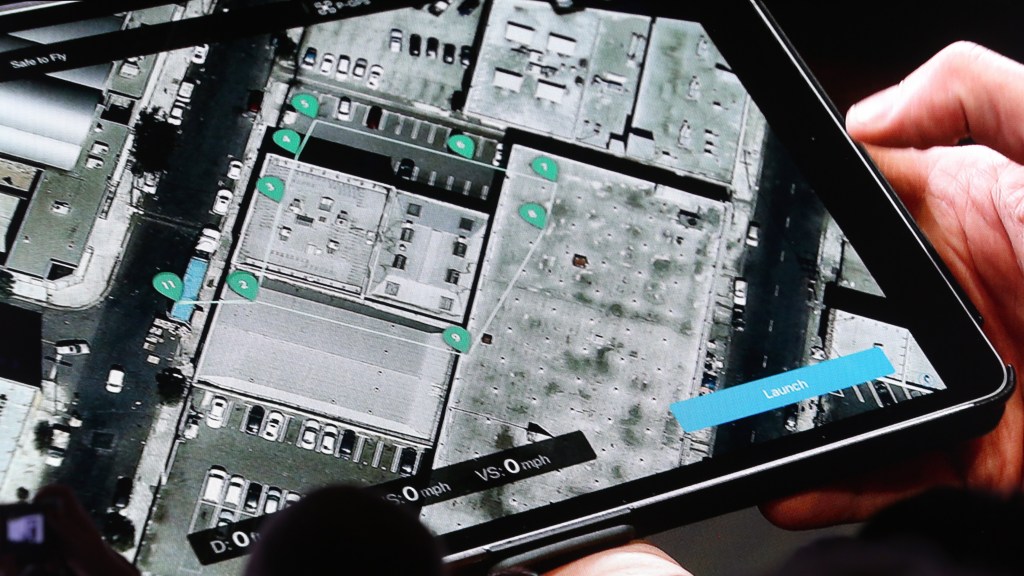 The next day, AT&T had its shot at something big, but went small with its keynote speech. Given that it’s the first carrier in the United States (if not the world) with a commercial mobile 5G network, it would have been natural for AT&T to offer some exciting 5G demos at CES, such as showing off an early 5G smartphone. 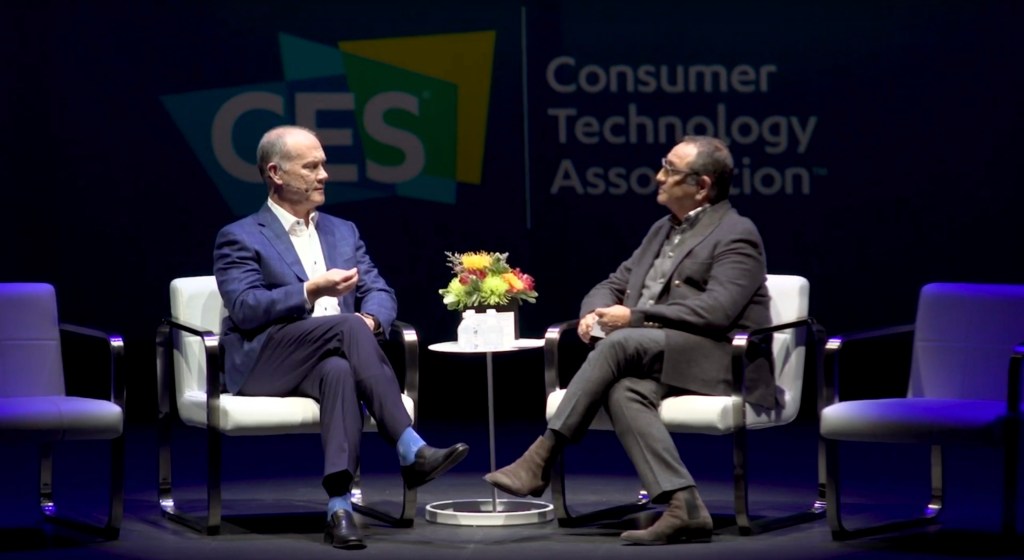 Instead, AT&T spent most of CES dealing with blowback from competitors and journalists over its decision to rebrand LTE-Advanced 4G service as “5G Evolution,” including the addition of “5G E” logos to some 4G smartphones. The most noteworthy moment in its media event was when AT&T Communications CEO John Donovan wrote off the controversial branding, saying that, “If I’ve occupied beachfront properties in my competitor’s head, that makes me smile. I’m proud that we broke our industry’s narrative two days ago.”

Dismissing concerns over potentially deceptive marketing as psychological warfare wasn’t a good look for the company. Thankfully, AT&T had much more to say on 5G during our interview and a press release issued before Donovan’s keynote.

Although I spent a fair chunk of time at Samsung’s 5G exhibit a day or two earlier, I went back to Samsung’s booth before the show ended to ask representatives about the 5G Prototype Smartphone it had mounted inside a clear box on the wall. “Is the unnamed device an actual 5G phone intended for U.S. networks?” I asked. “Is it working on a live network in your booth?” 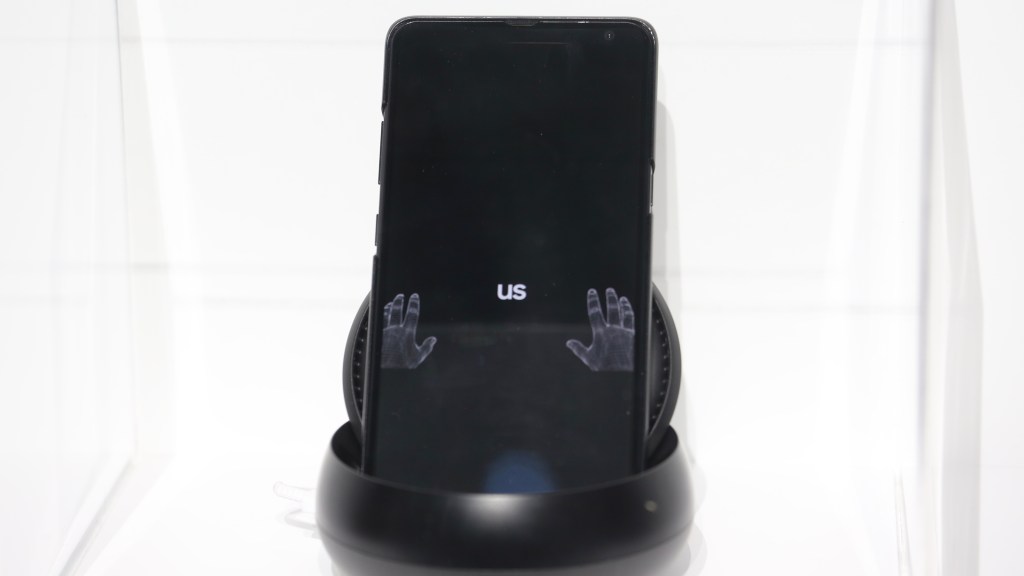 Short answers: no and no. As expected, the thin phone wasn’t making any live connection to a network, and was simply running a video stored in its own memory. It also appears to have been developed for use on sub-6GHz rather than millimeter wave networks, so it’s not packing the larger millimeter wave antennas that would be needed to work fully with Verizon’s and AT&T’s 5G networks here. 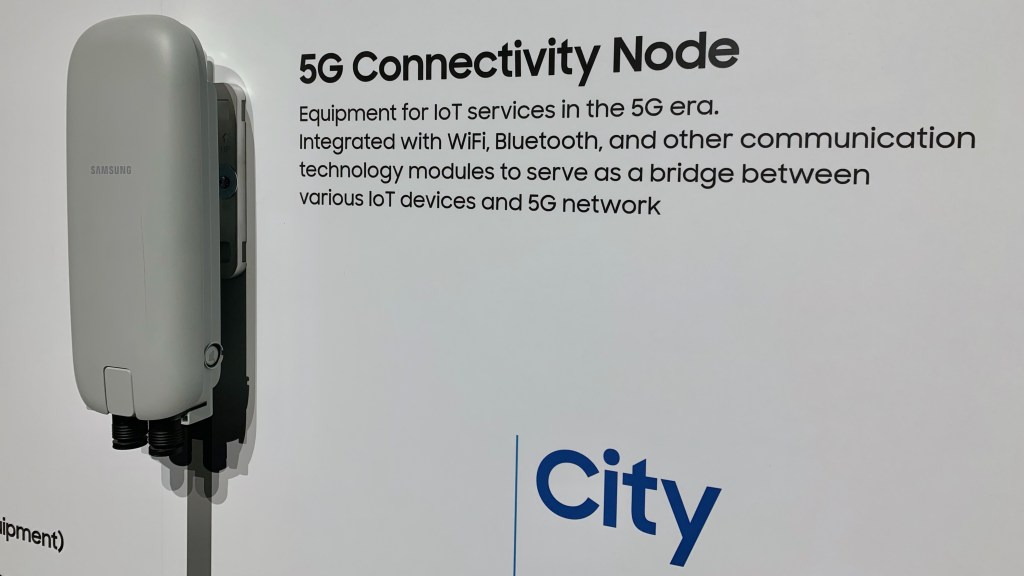 Samsung is a huge company, and as its wall of “end-to-end” 5G network hardware demonstrates, it has a lot of 5G products in the works. Expect to see the consumer products start to roll out at Galaxy Unpacked next month, then continue at Mobile World Congress in March, with more throughout the year. If Samsung plays 2019 right, this could be its biggest year for major new product announcements in memory, comparable to Apple at its peak.

Mentioned briefly in my prior 5G at CES article, SK Telecom was the largest of three carriers to launch commercial 5G services in South Korea last year, and it’s been making plenty of noise through press releases and news articles about its 5G ambitions. I was genuinely excited to see what SK Telecom would bring to CES, because its relationship with Samsung suggested that it might have some interesting new hardware or service to show off for the first time. 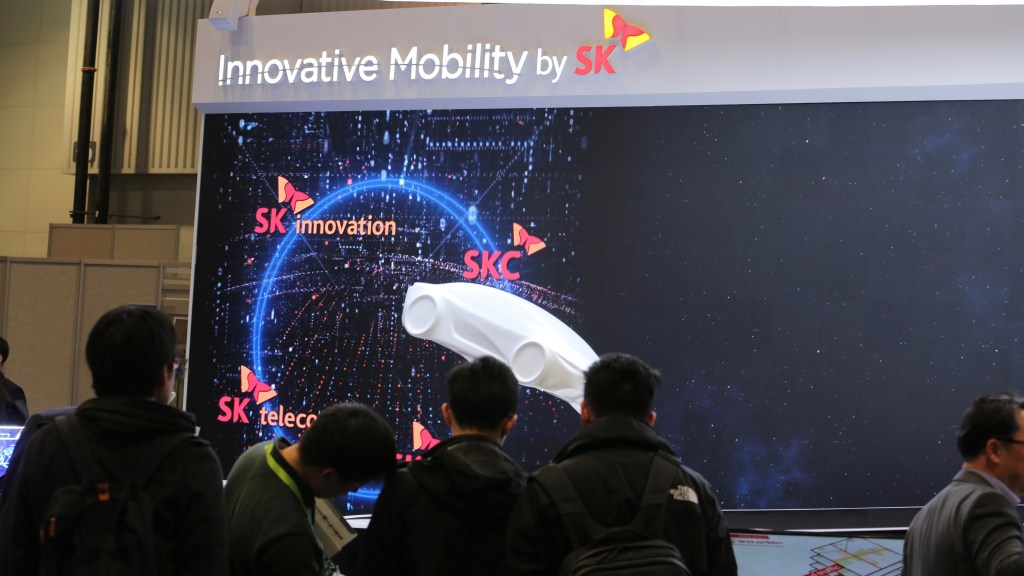 It’s worth underscoring that SK Telecom had sent out an email announcing “that it will participate in CES 2019 to showcase media and mobility technologies in the 5G era. The company has set up joint innovation booths under the theme of ‘5G X Next Entertainment’ and ‘Innovative Mobility by SK’.” So I took the time to visit both booths to see what it was doing with 5G. 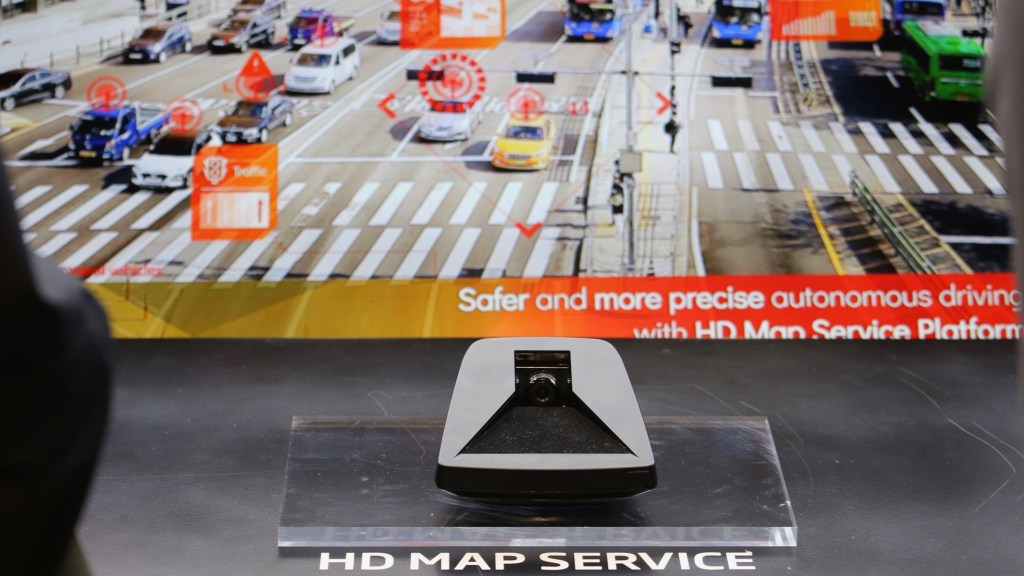 After my second round of walking, the answer again was “nothing.” Just as was the case with the “5G X Next Entertainment” booth I previously described, the “Innovative Mobility by SK” booth had no obvious 5G technologies on display, and no staff on hand to explain why the carrier was telling people to visit the booth for 5G information. At most, one could assume that some of the 3D avatars at the Entertainment booth or next-gen mapping technologies at the Mobility booth will benefit from 5G connections, but that’s just me trying to connect the dots SK Telecom and its partners left around.

During the show, one U.S. carrier’s spokesperson portrayed the South Korean 5G launches as grandstanding based largely on prototype 5G hardware — a claim I had hoped to see SK Telecom decisively rebuff. But what I saw at its booths didn’t give me a lot of confidence about its plans.

Of all the pictures I snapped at CES, this image from Intel’s booth was the best summary of the show’s 5G experience: The booth’s actual 5G demo station was really not great, and easier to miss than a gigantic adjacent screen talking about #goals for the future. If I had seen this at some no-name company’s booth, that would have been fine, but Intel was supposed to be one of the biggest 5G players at the show, and its only real 5G announcement was a Snow Ridge chip for base stations. At this point, who knows what it will actually deliver in 2019? 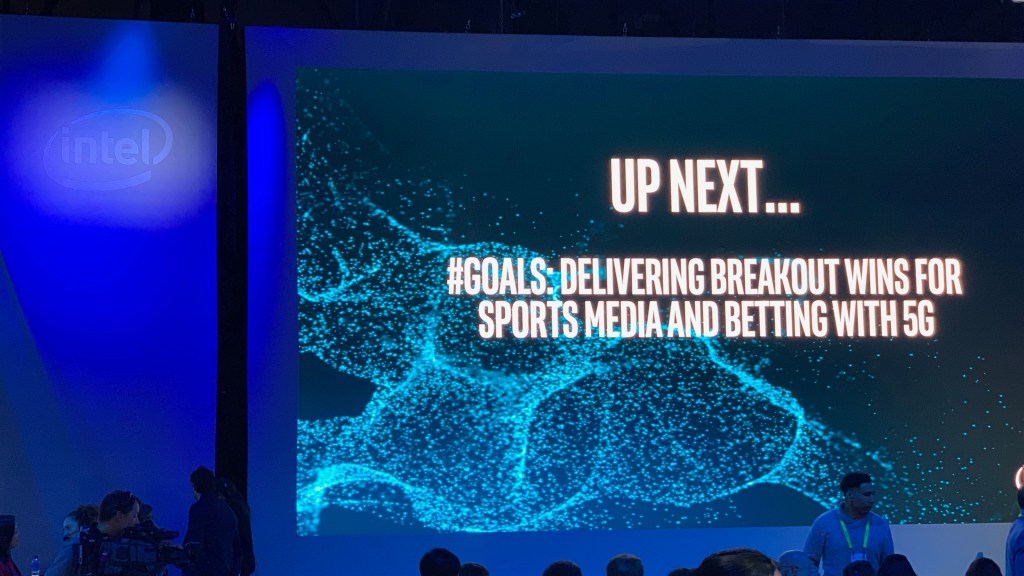 This year could wind up being either the watershed moment or the beginning of a debacle for 5G. Thanks to AT&T, T-Mobile, and Verizon, the very meaning of the term “5G” is now open to debate, as each carrier appears set to launch a different type of network under the 5G name. It now seems highly unlikely that early 5G phones will offer 5G service across all three U.S. networks, say nothing of international 5G networks.

From my standpoint, this all points to the opportunity for plenty of confusion in 2019. I’m hoping that post-CES events, particularly this year’s Mobile World Congress in Barcelona, provide some much-needed clarity for the entire cellular industry — and the billions of consumers who now depend upon it.